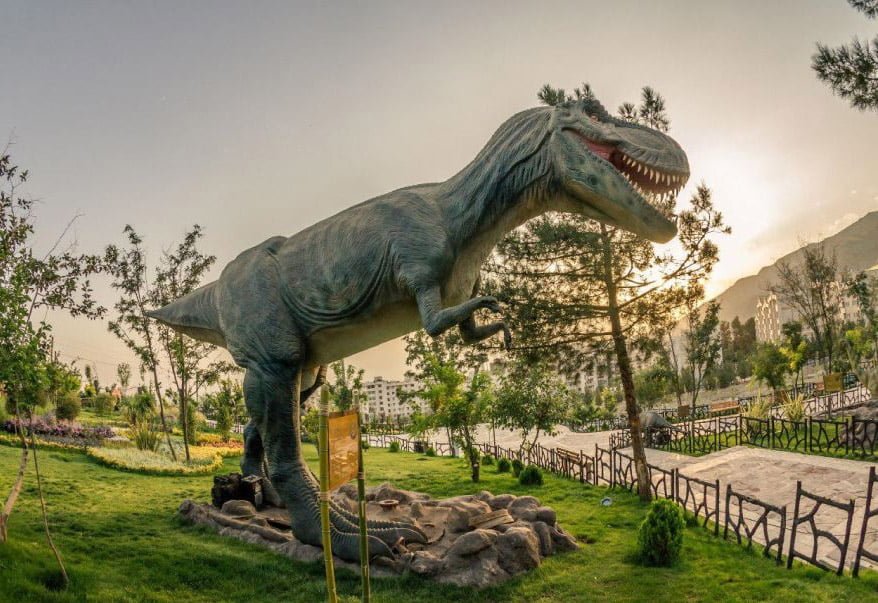 Unlike other parks, you cannot walk leisurely in Tehran’s Jurassic Park and take a rest for a while in a corner because everything here is different and exciting.

The park was established in 2014 on a 30,000-square-metre area in western Tehran with 28 movable dinosaurs and some other Jurassic animals in actual size. It is an educational and recreational park which provides the interested visitors with a chance to get familiar with how the dinosaurs used to live and eat.

The dinosaurs’ scientific names are shown in front of them so that the visitors could be able to get more familiar with their history.

An interesting point about them is their natural design, which lets the visitors see the dinosaurs blinking and moving their hands and feet. Also there is a baby dinosaur coming out of its egg and going into it again in one corner of the park.

The moves of the dinosaurs in actual size of the park come with sound and special effects. There is also a big dinosaur’s egg in a corner of the park which the visitors can watch to learn how the dinosaurs were born.

The children and teenagers visiting the park can get familiar with the worlds of pre-history animals.

Meanwhile, there are some workshops, studios (for special shooting with dinosaurs), a 3-D cinema and shops which attract the visitors further with the interesting world of this animal.

The term “Jurassic park” was first used by American doctor and writer Michael Crichton as the title of his novel in 1990. Steven Spielberg made a blockbusting film based on it in 1993. After the film, dinosaurs’ park museums called “Jurassic Park” were built around the world in important cities like Warsaw, Havana, Los Angeles and Kiev.

What follows are photos of Tehran’s Jurassic Park retrieved from various sources: