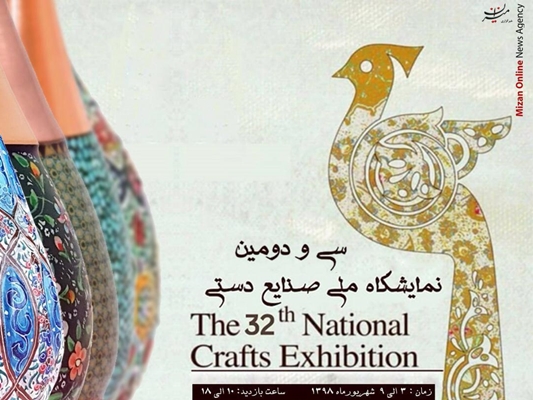 The exhibition, held at Tehran’s Permanent International Fairground, opened on Sunday, August 25, in a ceremony attended by the caretaker of the newly-formed Ministry of Cultural Heritage and Tourism.

The exposition, under the theme of “Handicrafts, Production Boom, A Global Glory”, will be open to public until August 31.

The Cultural Heritage Ministry’s deputy for handicrafts, Pooya Mahmoudian, has told Miras-e-Ariya that the national exhibition is being held in an area of 8,000 square meters and includes more than 600 booths occupied by artists from 31 provinces across Iran, by the exporters, students, and the owners of virtual stores.

She also noted that a database of customers of handicrafts in 18 countries would be unveiled in the exhibition, whose primary goal is to support domestic production and national handicrafts industry.

The artists from underprivileged regions are given free spaces in the expo, which includes 13 black tents of Iranian nomads, a special section for training courses, and music performances, she added.

Mounesan announced in February that Iran had exported $490 million worth of handicrafts in March-December 2018.

Iran, as one of the most ancient civilizations of the world, and the land of many tribes so different in culture, lifestyle, and tradition has enjoyed a wide variety of handicrafts during the history. Persian handicrafts, each narrating the stories of the culturally diverse populations in different parts of Iran, are among the best souvenirs for the tours to Iran.