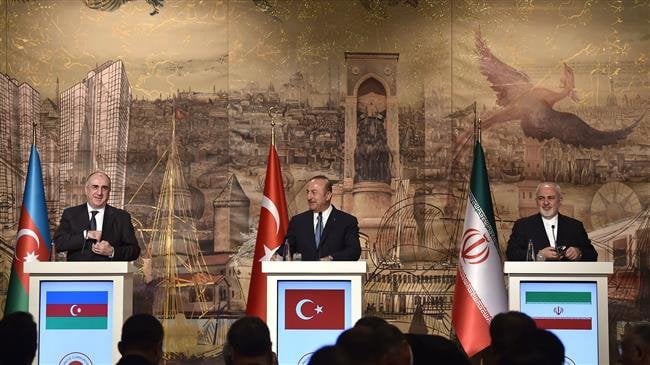 Zarif made the remarks in a joint press conference in Istanbul, Turkey, on Tuesday with his Turkish and Azerbaijani counterparts Mevlut Cavusoglu and Elmar Mammadyarov, respectively, following their sixth trilateral meeting.

“Cooperation among Tehran, Ankara and Baku is very important for development of the three countries, development of the region, the improvement of living conditions and the promotion of regional peace and security which is unfortunately facing with multiple challenges,” the top Iranian diplomat said.

He expressed hope that regional issues, particularly problems of the Syrian, Palestinian and Yemeni peoples, would be solved peacefully.

Zarif said, “We have always emphasized that regional issues should be settled based on [the principles of] international law and through peaceful methods.”

Elsewhere in his remarks, the Iranian foreign minister said the three sides also agreed to hold one meeting among their private sectors, adding it would be a “very important step” to boost regional cooperation.

The Turkish foreign minister, for his part, said Tehran, Ankara and Baku oppose unilateral measures on regional issues and believed that common and multilateral decisions must be made in this regard.

The three countries agreed that regional issues should be solved peacefully and through dialogue, he added.

Cavusoglu called for the continuation of joint cooperation to promote stability, peace and security in the region and said trilateral economic ties would also serve the interests of all regional states.

He further said Turkey has continued its cooperation with Iran after the United States withdrawal from a 2015 multilateral nuclear agreement signed between the Islamic Republic and the P5+1 group of countries.

The Turkish foreign minister emphasized that his country is holding consultations with European countries on the continuation of cooperation with Iran.

Earlier this month, Turkish President Recep Tayyip Erdogan slammed as unjust the United States’ move to impose sanctions against Iran and threaten to further toughen them.

He emphasized that the US had taken the wrong path by threatening and using blackmail instead of dialogue, saying it was impossible for any country to trust Washington.

US President Donald Trump announced in May that Washington was pulling out of the nuclear agreement, officially known as the Joint Comprehensive Plan of Action (JCPOA), which lifted nuclear-related sanctions against Tehran in exchange for restrictions on Tehran’s nuclear program.

A first round of American sanctions took effect in August, targeting Iran’s access to the US dollar, metals trading, coal, industrial software, and auto sector. A second round will be targeting Iran’s energy sector and financial transactions.

The Azerbaijani foreign minister said his country called for the expansion of cooperation with Iran and Turkey in trade and transportation sectors.

The last meeting among the Iranian, Turkish and Azerbaijani foreign ministers was held in the Azeri capital of Baku in December 2017, and the one before that in the northern Iranian city of Ramsar in April 2016.

World stands up to US sanctions: Zarif

Speaking to IRNA on the sidelines of the tripartite meeting, the Iranian foreign minister said the international community is standing up to the US sanctions against Tehran.

He added that the neighboring countries and Europeans nations have resisted against Washington’s unilateral measures.

“The Americans have not achieved their predicted goals by [imposing] illegal sanctions against Iran,” Zarif said.

He warned of the outcomes of Washington’s unlawful sanctions against Tehran and said, “Unfortunately this law-breaking country (the United States) wants to punish a country (Iran) that is abiding by law.”

This method will have severe consequences for the world order, Zarif pointed out.

The top Iranian diplomat told reporters upon his arrival in Istanbul on Monday that nothing new would happen after the imposition of the second batch of US sanctions.

Iran has stayed in the JCPOA for the time being, but has stressed that the other parties to the agreement have to work to offset the negative impacts of the US pullout for Iran if they wanted Tehran to continue to remain in it.

Europe has been taking a range of measures to meet Iran’s demand for practical guarantees.