The deputy governor of Afghanistan’s Herat province has said the Taliban will not let the Daesh terrorist group to use Afghan soil for attacks against Iran.

Shir Ahmad Ammar made the remark in a meeting with Iranian authorities on the border between Iran and Afghanistan where the Iranian side delivered humanitarian aid to the Afghans.

Herat’s deputy governor said the Taliban are committed to international law and neighborly ties and will not let Daesh to use Afghanistan as a launching pad for their acts of terrorism.

Iran has sent humanitarian aid to Afghanistan steadily over the past weeks. On Tuesday, a plane carrying 50 tons of Iranian aid landed in Kabul Airport.

A delegation of Iran’s Khorasan Razavi Province bordering Afghanistan visited Kabul and held trade talks with the Taliban. Iran has held several rounds of talks with the Taliban and urged the group to form an inclusive government which would represent all Afghan ethnic groups and political factions.

Iran has also hosted huge numbers of Afghan refugees since the Taliban takeover of Afghanistan nearly two months ago. 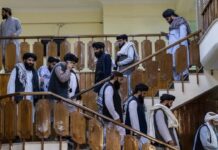