Representatives of the Vatican proposed on several occasions to buy it from Tabriz Library and were ready to offer a blank check in return, Manuchehr Jafari said.

The most ancient handwritten edition of Acts of the Apostles is kept at Tabriz Central Public Library.

Because the book is priceless, both in terms of material and spiritual value, Iran’s national currency was once backed by it.

The book was written on fish skin in ancient Syriac language [Assyrian language] which is among the world’s endangered handwritings.

What appears next is the translation of a report filed by Farhikhtegan daily on the ancient book: 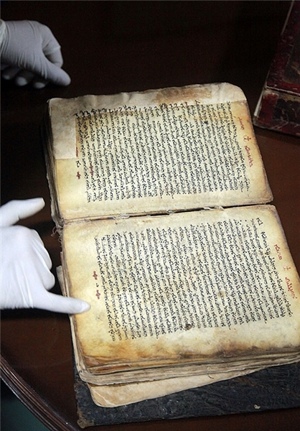 It’s not clear when and how the book ended up in Iran, but about eight decades ago, its last owner sought to sell it overseas. The then government, however, did not allow the sale to go through after it found out about the owner’s decision.

The book was restored about 800 years ago in a village in West Azerbaijan Province. It was initially assumed to be the Scripture which encompassed the Bible, Torah, Zabur and Solomon’s letters.

Later studies by European experts on Syriac language showed that it is one of the most credible and ancient Bibles in the world.

Head of the Organization of Public Libraries in East Azerbaijan Province Manuchehr Jafari said, “Representatives of the Vatican proposed on several occasions to buy it from Tabriz Library and were ready to offer a blank check in return.”

One of the concerns about the translation of the ancient book is loyalty to its original text, because there are hardly a handful of experts who are familiar with ancient Syriac language in the world.