Suspicious Tanker Attacks ‘Not Funny, But Alarming’: Iran to Pompeo 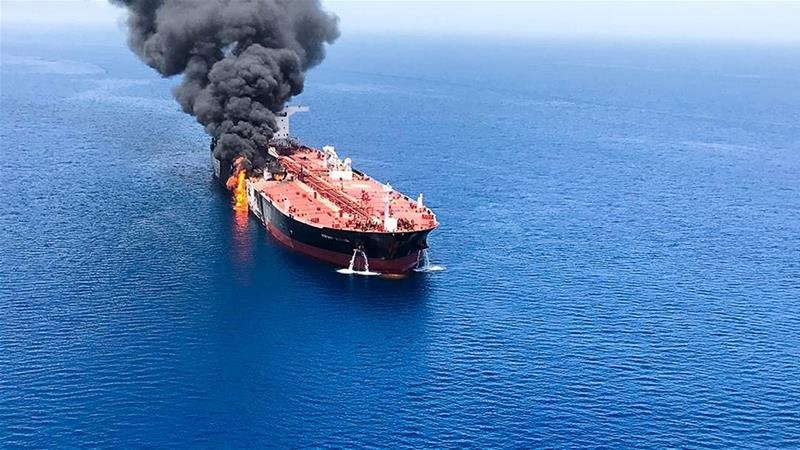 Iranian Foreign Ministry Spokesman Seyyed Abbas Mousavi has rejected US Secretary of State Mike Pompeo's anti-Iran accusations, saying the suspicious nature of the recent attacks on two oil tankers in the Sea of Oman is not funny or ridiculous but alarming.

“The Islamic Republic of Iran is responsible for ensuring the security of the Strait of Hormuz, and we showed this by rushing to save the sailors of the incident-hit vessels in the shortest time possible,” Mousavi said Friday.

“Pinning the blame on Iran for the suspicious and regrettable incident for the oil tankers seems to be the easiest and most simplistic thing Mr Pompeo and other US statesmen could do,” he noted.

“While the Japanese prime minister is meeting with Iran’s top leader to discuss ways to ease regional tensions, which hidden hands have been at work to thwart such efforts and which sides benefit from that?” the spokesman asked.

“Mr Pompeo! The suspicious nature of incidents for oil tankers is not a joke. It is not only not funny, but it is also worrying and alarming,” Mousavi added.

Earlier, US secretary of state pointed the finger of blame at Iran saying the assaults were the latest in a series of hostile actions meant to disrupt the flow of oil.

“Taken as a whole, these unprovoked attacks present a clear threat to international peace and security, a blatant assault on the freedom of navigation, and an unacceptable campaign of escalating tension by Iran,” Pompeo said, vowing the US would defend itself and its partners.

Iran’s foreign minister later slammed the accusations, saying “the B Team” is using Thursday’s attacks on tankers in the Sea of Oman to resort to sabotage diplomacy.

Mohammad Javad Zarif said on his twitter account that the US has jumped into anti-Iran conclusions without any evidence. He noted that the purpose is to cover up Washington’s economic terrorism against Iran.

Meanwhile, Iran’s mission to the United Nations strongly rejected “the US unfounded claim” that Tehran was behind the attacks.