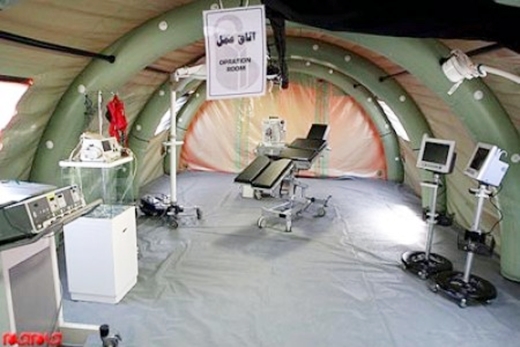 The IRGC Ground Forces have set up field hospitals in the southeast to offer medical services to the needy there.

The head of the Public Relations Office of the IRGC Ground Force’s Quds Base in charge of the southeast has said that as many as 2,709 surgical operations have been performed in four days in ten field hospitals in Sistan and Baluchestan Province to mark Unity Week.

Colonel Ghasem Hassanzadeh told the Islamic Republic News Agency on Monday that at least 255,000 patients have received medical services in these hospitals in the same period.

The following is the translation of what else he told IRNA:

In the first four days of Unity Week, four women had natural childbirths in the field hospitals stationed in the province.

The field hospitals – which have been stationed in districts close to a number of provincial towns such as Dalgan, Hirmand, Konarak, Saravan, Sarbaz, Zarabad, and Zehak – offered medical services and treatment to the needy in southeastern Iran.

By setting up field hospitals, the Islamic Revolution Guard Corps aims to improve the healthcare of patients, and offer medical and clinical services to people in impoverished and remote areas in the country.

Since 2009, the IRGC’s Ground Forces in charge of the south have launched 29 field hospitals in Sistan and Baluchestan, Kerman and Hormozgan provinces.

The IRGC Ground Force’s Quds Base, which is based in Sistan and Baluchestan Province, covers areas in the border province as well as parts of Kerman and Hormozgan Provinces.