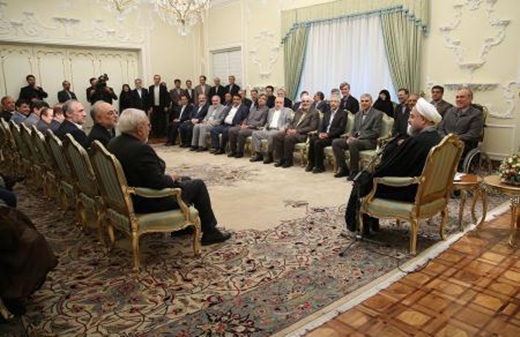 Designation of the current Iranian year as Year of ‘Harmony and Unanimity’ by the Supreme Leader has coincided with the significant achievements made by Iran in nuclear fields, he said.

President Rouhani made the remarks in a meeting with a group of cabinet ministers and executive managers Saturday morning.

Referring to recent intensive nuclear talks in Lausanne, he said the government welcomed the views of Iranian officials in the three branches of governments and believed that the guidelines of the Supreme Leader of the Islamic Revolution Ayatollah Seyyed Ali Khamenei led to these achievements.

Nuclear talks once again legitimized Iran’s uranium enrichment on its soil, he said, adding that Arak heavy water reactor is to continue its operation with a most updated technology and so are other nuclear installations in Fordo and Natanz.

Sitting with six world powers at the negotiating table to defend the country’s rights should be considered as a great achievement, he said.

Final deal will also ensure a promising situation for exercising resistance-based economy in the country as world powers have reached this conclusion that their continuation of sanctions would never bear any fruit, said President Rouhani.