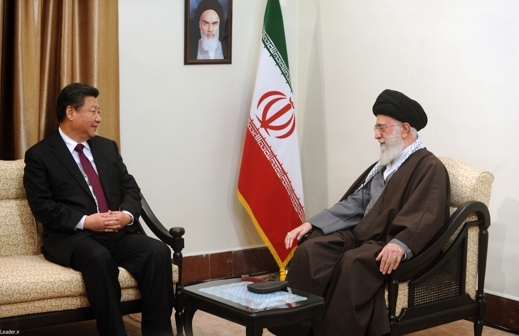 Supreme Leader of Islamic Revolution Ayatollah Seyed Ali Khamenei said on Saturday that Iranian government and nation have been seeking expansion of relations with independent and reliable states such as China.

The Supreme Leader made the remarks in a meeting with Chinese President Xi Jinping.

The Supreme Leader acknowledged the 25-year strategic agreement drawn up by Iranian and Chinese presidents.

Ayatollah Khamenei welcomed the proposal made by Chinese president about revival of the Silk Road and expansion of cooperation among the Silk Road states is a fully logical and acceptable idea.

‘The Islamic Republic of Iran will never forget China’s cooperation during sanctions.’

The Supreme Leader said that energy is one of the key issues worldwide.

‘Iran is the only independent state in the region that can be trusted as energy partner because contrary to certain regional countries, Iran’s energy policy is not influenced by foreign factor.’

The Supreme Leader criticized Washington for its hegemonic policies and the US insincerity with other governments, saying that independent states want cooperation with each other and Iran-China agreement for 25-year strategic cooperation falls in the same context.

‘The two sides should be serious to bring agreements to the implementation stage.’

The Supreme Leader referred to Iranian culture’s orientation towards the east and said, ‘Westerners have never been able to win Iranian nation’s trust.’

Calling the US policy on Iran ‘worse and more hostile’ than that of western states, Ayatollah Khamenei said the hostile policies have made Iranian nation and officials to seek expansion of relations with independent states.

Emphasizing that ‘united China’ is among principled and absolute policies of the Islamic Republic of Iran, Ayatollah Khamenei welcomed proposal of the Chinese President to develop Iran-China security cooperation.

‘Unfortunately, our region is now insecure due to wrong policies of westerners and the diversionary and wrong attitude towards Islam; it is feared that its scope will be widened; so it should be checked through wise cooperation.’

The Supreme Leader said that certain regional countries are main source of such a diversionary attitude and that instead of confronting the main source of such an ideology and terrorist groups, westerners are invading and piling up pressure on Muslim communities in Europe and the US, while terrorist wings are completely different from the true Islamic ideology.

The Supreme Leader derided the US and the western governments for insistence on the terminology of ‘Islamic State’ to introduce certain terrorist groups.

Ayatollah Khamenei said such an approach is an insult to Muslims and instead of solving the problem, they indirectly promote terrorist groups.

The Supreme Leader termed US claim of forming anti-terrorism coalition as a deception.

Ayatollah Khamenei hoped that the outcome of talks and agreements in Tehran will be helpful for both sides in true sense.

The Chinese president for his part expressed pleasure with visiting Iran and thanked Iranian nation and government for their sincere feelings. He said such a sincerity is result of cooperation and cordial and long-term exchanges between Iran and China.

Xi pointed to the chronology of Iran-China connection through the ancient Silk Road and said the road is the symbol of peace, progress and friendly exchanges. The countries lying on the road can through expansion of cooperation defend their interests against Americans’ model of stirring regional economic balance, thus attaining their goal, said Xi.

He noted that certain superpowers want to dominate monopoly and policy of jungle ‘either with us or with enemy’, but, the progress of the newly emerging economies will bring the monopoly of power out of their control and provide a suitable atmosphere for ideas and policies of the independent states.

He said his country appreciates Iran’s support for integrated and united China as a model of mutual confidence and independent policies of both countries. We follow the path of independent development and are ready to continue our cooperation in all fields after lifting of sanctions as we stood by Iran during sanctions.’

He also referred to Iran’s abundant geographical, human and energy advantages and said economy of China and Iran are complementary to each other and during the visit, Iran and China reached agreement on planning for 25-year strategic cooperation, being ready to expand and widen cooperation in the cultural, educational, technological, military and security domains as strategic partners.

The Chinese president underlined the need for taking up mechanism for growing mutual security cooperation to confront terrorism and solve complicated regional issues.

He hailed the Supreme Leader’s ‘wise and farsighted’ remarks and said Chinese government and nation have a friendly and sincere approach towards Iranian leadership.