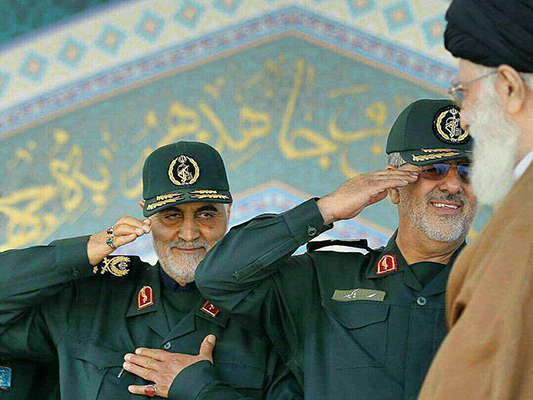 Verily, We have granted thee a manifest Victory (Translator’s note: The statement is a verse from the Holy Quran)

To the respected and brave Leader of the Islamic Revolution

Six years ago, a dangerous [wave of] sedition similar to the ones during the era of Imam Ali, which stripped Muslims of the opportunity to truly understand and savour pure Islam, swept across the Islamic world like a tornado, but this time it was complicated and tainted with the poison of Zionism and hegemony. The dangerous and poisonous sedition was triggered by the enemies of Islam in a bid to start the flames [of tension and crises] in the Muslim world and pit Muslims against one another. An evil move under the title “The Islamic State of Iraq and the Levant (ISIL)” (also known as the Islamic State of Iraq and Syria, ISIS) managed, in the very early months, to mislead dozens of Muslims youths from both countries [into joining it] in a very effective manner and brought a very dangerous crisis upon Iraq and Syria. It captured hundreds of thousands of kilometres of the territory of these countries along with thousands of villages, cities and key provincial capitals and destroyed thousands of workshops and factories and the countries’ infrastructure such as roads, bridges, refineries, wells, oil and gas pipelines, power stations and other facilities. They also destroyed with bombs or burned important cities along with their invaluable historical artefacts and national civilization.

Although the extent of the damage cannot be assessed, initial surveys put the losses at $500 billion.

In this incident, very heinous crimes, which cannot be displayed, were committed, namely the decapitation of children, skinning men alive in front of their families, taking innocent girls and women captive and raping them, burning people alive and the mass beheading of hundreds of youths.

A number of the Muslim people of these countries, perplexed by the poisonous storm, were killed by the Takfiri criminals’ razor-thin daggers, and millions of others abandoned their homes and were forced to flee to other cities and countries.

Amid this dark sedition, thousands of Muslims’ mosques and holy centres were destroyed or devastated, and in some cases they (ISIS terrorists) detonated mosques with Imams and worshippers inside.

More than six thousand deceived youths blew themselves up in the name of Islam in suicide attacks or with explosives-laden vehicles at Muslims’ squares, mosques, schools, and even hospitals and public places. As a result of these criminal acts, scores of innocent men, women and children were martyred.

By the admission of the highest American official who is currently the president of the country, all these crimes were engineered and orchestrated by authorities and organizations affiliated with the United States. Moreover, the incumbent US leaders are pressing ahead with this approach.

In addition to God’s grace and the special attention of the Prophet Mohammad and his respected Household which thwarted this dark and perilous plot, the wise leadership and prudent guidelines of Your Excellency and of senior religious figure Ayatollah Ali Sistani resulted in the mobilization of all resources to counter this poisonous hurricane.

Incontrovertibly, the resistance of the Iraqi and Syrian governments and the perseverance of the two countries’ armies and youth, especially the Popular Mobilization Units, and the youth of other countries together with the strong and pivotal presence of Hezbollah led by Seyyed Hassan Nasrallah played a pivotal role in defeating this dangerous phenomenon.

Definitely, the invaluable role of the nation and government of the Islamic Republic of Iran, especially the respected president, parliament, the Ministry of Defense and military, law enforcement and security agencies of our country in supporting the governments and nations of the above-mentioned countries should not be ignored.

I, as a humble soldier instructed by Your Excellency [to serve] in this battlefield, with the completion of the operation to liberate Abu Kamal as the last stronghold of ISIS, and the lowering of the flag of this American-Zionist group and the hoisting of the Syrian flag, declare the end of the domination of this cursed wicked entity, and on behalf of all commanders and little known devotees [serving] on this scene and thousands of Iranian, Iraqi, Syrian, Lebanese Afghan and Pakistani martyrs and troops who were injured and disabled while defending holy shrines and who sacrificed their lives to safeguard the lives and honour and sanctities of Muslims, I congratulate Your Excellency and the great Iranian nation and the oppressed nations of Iraq and Syria and other Muslims of the world on this very big an determining triumph, and I kneel before God Almighty and bow my head in supplication to thank Allah over this great victory.