Sholeh-Qalamkar Broth: A Hard to Make, but Mouth-Watering Iranian Food 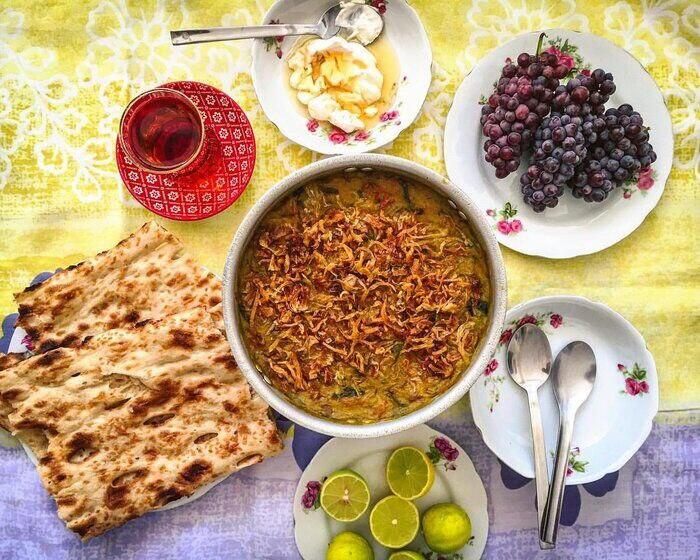 Sholeh-Qalamkar broth is a popular, traditional Iranian meal with a rather long list of ingredients and a lengthy recipe.

Although it is difficult to make, Sholeh-Qalamkar broth is a very popular meal which is also distributed among people as Nazri (votive food offering), especially in the holy month of Ramadan.

The food is made with a whole variety of ingredients and takes a long time to cook. That is why the Sholeh-Qalamkar broth is known as a food which is usually served as Nazri and on some special occasions. Nevertheless, it can be cooked at home as well. The holy month of Ramadan is the best opportunity for making this tasty broth.

First, put the peas and beans in a bowl before pouring water on them. Then soak them for six hours. We had better change the water two to three times during those six hours. You may soak the pulses overnight and rinse them the next morning. Then peel three of the onions and shred them before putting them in a large frying pan and putting them on low heat.

Afterwards, put the onions into oil and sauté them until they turn soft and gold in colour. Then put the fried onions onto a plate and set them aside. Then wash the wheat and rinse it before putting it into a casserole and adding five glasses of water. Turn down the heat and wait until the wheat is cooked through. Afterwards, put the peas in a casserole and add water before putting them on the heat to cook. After one hour, rinse the beans, too, and add them to the peas, so that they both get cooked through.

Then wash the meat and chop it before putting it in the casserole and adding a few glasses of cold water. Then peel the remaining one onion together with the garlic. Chop the onion into four parts and add it to the meat. Put the ingredients on low heat to cook. Then put the lentils in a bowl and add water to soak it for one hour. After the meat is cooked, bring it out of the juice before straining the juice and putting it aside. Shred the meat and put them aside, too. Now, wash the rice clean and put it in a large casserole. Rinse the lentils and add them to the rice. Add six glasses of water to the ingredients inside the casserole and first put them on high heat until it starts boiling. Then turn down the heat until the lentils and rice get soft. The herbs used to make this broth include spinach, sweet fennel, basil, parsley, mint and coriander. Put an equal amount of each in Sholeh-Qalamkar broth. The herbs need to have already been cleaned, washed, rinsed and chopped.

After the rice and lentils are cooked, add some salt before adding the herbs to the ingredients (so that the herbs will almost retain their colour).

It takes almost 20 minutes for the herbs to go soft. Afterwards, add cooked peas, beans and wheat as well as shredded meat and meat juice. Then add the spices, including turmeric, salt and black pepper.

Put half of the fired onions inside the broth before adding boiling water. Put the casserole lid on and leave the broth on low heat for two to three hours until it is cooked through. When the broth is ready, pour it into a large bowl and garnish it with fired mint, kashk and fired onions.