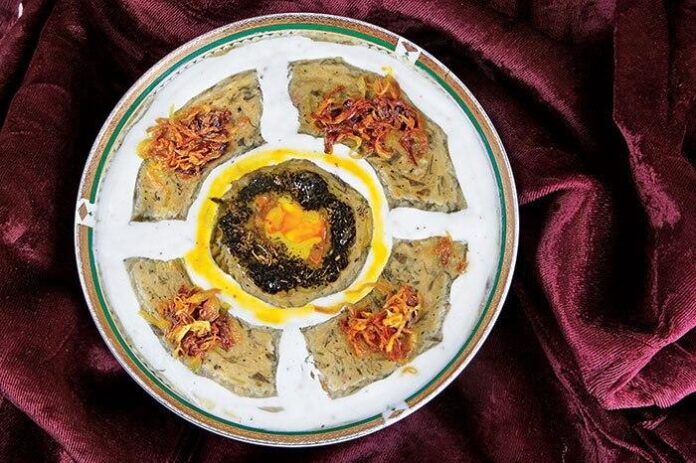 The Shirazi yoghurt broth is a tasty, traditional Iranian food which originates from the city of Shiraz in southern Fars province, and can be served as the main meal or as a snack.

Split peas: Half a cupful

First, clean the split peas and put them in a bowl of water. Leave them in water for 5 hours. In the meantime, change the water 2 to 3 times.

Put the meat in a casserole and put it on the heat. Then add the onion along with some salt and pepper. Afterwards, add seven or eight glasses of water and put the lid on, allowing the meat the be cooked through on low heat.

Note that we need the meat juice, so we shouldn’t turn up the heat to keep the meat juice from evaporating. After the meat is cooked through, pour the juice into a big bowl and leave the meat at the bottom of the casserole to go completely dry. Then turn off the heat and allow the meat to get cold.

Afterwards, put split peas into a sieve and wash them before putting them in a casserole. Add almost 6 cups of meat juice to the split peas and add some salt and pepper. Then put the mixture on low heat until the split peas are cooked through.

Then wash the dill and tarragon clean and put them into the sieve to drain before chopping them up and putting them aside.

Now, wash the rice and add it to the split peas and allow it to cook on low heat and become mashed. Then sprinkle some salt on the mixture and add the herbs.

Now, allow the broth to remain on the heat to become thicker. Stir the broth from time to time. After 20 minutes, the broth has become thick enough. Turn off the heat as all the ingredients are cooked through. Now, add yoghurt to the broth and mix them well. Now you may serve the dish and garnish it with sautéd shredded onions.