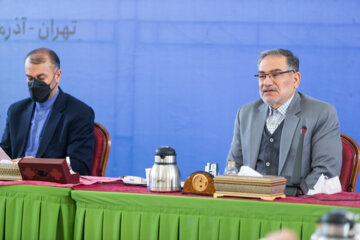 The secretary of Iran’s Supreme National Security Council has said even with the assassination of Iran’s top General Qassem Soleimani, the United States did not achieve its goal of dismantling the regional resistance.

Ali Shamkhani was speaking at the meeting of ambassadors and heads of Iranian diplomatic missions in neighboring countries on Monday in Tehran.

He also said the failure of the US policies and the heavy blow that Iran dealt to the United States in Ain al-Assad base in northern Iraq, while proving the legitimacy of Iran’s regional policies to everyone, provided the ground for reducing the US presence and its withdrawal from the region.

Shamkhani said one of the most important developments of this era was the failure of the so-called policy of maximum pressure of the United States and its allies against the Islamic Republic of Iran.

He added that the resistance front has been able to defeat one of the most important destabilizing forces of the region, namely the Daesh terror group, and dismantle the center of terrorism organized by the United States.

The Secretary of Iran’s Supreme National Security Council referred to the decline of the US hegemony and the increasing development of emerging powers, saying these conditions have led to fundamental changes and the creation of new tensions and great international rivalry with the United States.

He added that the US withdrawal from the region was due to the failure of its policies in Iraq, Afghanistan and the wider West Asian region and the US decision to prioritize confronting China as a geoeconomic threat and Russia as a geopolitical threat based on the same conditions.

Shamkhani said the arrival of new factors and components and the mutation of the former components have caused key changes in the geopolitical structure of the region, and, as a result, security arrangements have changed compared to previous periods in West Asia.
Shamkhani mentioned the escalation of confrontation between Iran and the Zionist regime, the shift by the Zionist regime from the US European Union command known as Eucom to the US regional command or Centcom, and the normalization of relations between some Arab countries and the Zionist regime as dangerous signs of this change.

He also cited the defeat of the Arab League in the Yemen war, Lebanese resistance movement Hezbollah’s determination to maintain the deterrence equation and the emergence of Gaza as an important power against the Zionist regime as other examples of these developments.

The Secretary of Iran’s Supreme National Security Council pointed out that one of the main strategies of the Zionist regime is Iranophobia and creating tension in Iran’s relations with its neighbors, which is why Iran believes any presence of this regime in the Persian Gulf region is a source of crisis and tension and to the detriment of the interests of regional nations.

Shamkhani further referred to the global situation and its impacts on the strategic position of the West Asian region and underlined the need to adopt strategies that lead to convergence and synergy of regional nations, especially between the Islamic Republic of Iran and its neighbors.

He explained the policies of the Islamic Republic under such circumstances and said resolving any tensions and even misunderstandings, developing and strengthening comprehensive cooperation, especially in the economic, defense and security and strategic partnerships are top priorities of Iran’s foreign policy towards its neighbors. Shamkhani noted that the policy of giving priority to neighbors should turn into a quantitative indicator and be continuously measured in the form of evaluating the performance of officials of the Islamic Republic’s missions in neighboring countries and the governors of border provinces.

Shamkhani described the role of Iranian ambassadors and heads of its diplomatic missions in neighboring countries in advancing Iran’s policies as very important and vital.
He also stressed the need to use all available capacities to implement these policies.