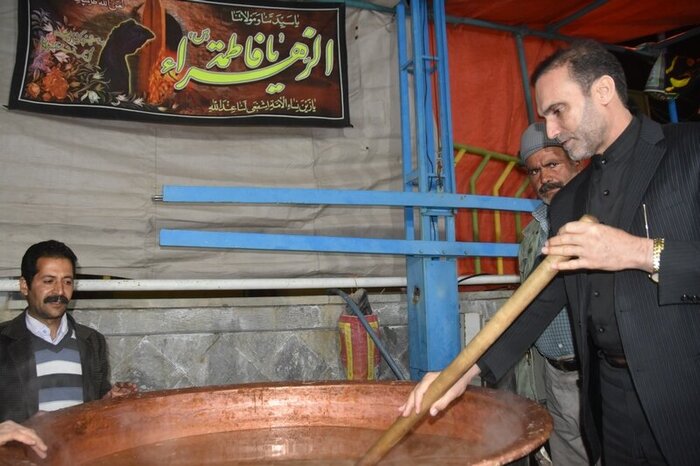 Preparing the Iranian traditional sweet paste, Samanu, is part of the country’s ancient heritage and provides a time for families to get together in the city of Shareza, in the central province of Isfahan.

Samanu has been cooked in Shahreza for 500 years with the same rituals of the past, including in a zinc cauldron, heated by firewood, and of course, with faith and as offering for the members of Prophet Mohammad’s household specially his daughter Fatemeh Zahra.

The nutritious paste is the only food solely prepared using water and flour, and has no other additive, including salt and sugar.

The sweet taste of Samanu is drawn from the golden grains of wheat, germinated and milled into flour with its germ and bran.

Samanu is cooked in a mud furnace and the master cook, who prepares it, adds certain amounts of flour and water to the zinc cauldron, which are determined by his experience.

The cook then patiently stirs the mix until it is reduced to a paste without any water. This is called “frying”, which leaves a brown product with a nice fragrance.

Then, the cook adds some water to dilute the mix and the process of reduction is repeated a few times.

After 18 hours, a white cloth is placed over the cauldron to steam the mix. A zinc tray is also put on top and a volume of the Holy Quran, a mirror, candles, a comb, chocolate and a pot of water are then put over the tray.

Samanu takes 7 more hours to steam, during which firewood is removed from underneath.

The traditional Samanu cooking method in Shahreza is unique and is a ritual performed every year when the cold seasons come around.