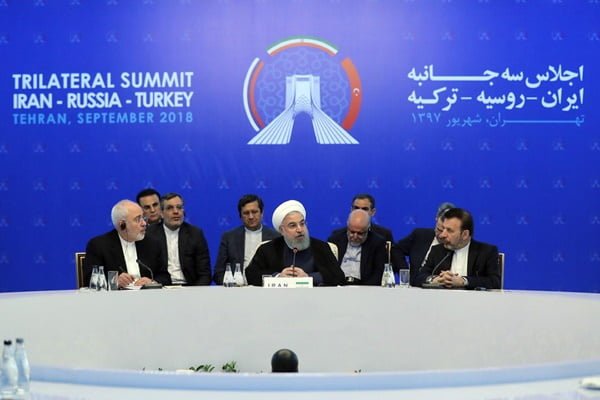 Iranian President Hassan Rouhani says efforts by Iran, Russia and Turkey have curbed bloodshed of terrorism in Syria, preparing the ground for constructive talks among Syrians to settle the seven-year conflict.

Rouhani made the remarks in a trilateral meeting with his Russian and Turkish counterparts, Vladimir Putin and Recep Tayyip Erdogan, during which they explored ways of putting an end to the conflict.

Rouhani said cooperation among Iran, Russia and Turkey provides a stable foundation for efforts to restore peace in Syria.

The three countries, the guarantors of the peace process in Syria, agree that they need to root out terrorism while taking care of civilians, he noted.

The Iranian president then mentioned six points that needs to be considered in any final solution to the conflict.

Rouhani said Syria’s territorial integrity and independence must be respected in settlement talks.

The Iranian president said the fight against terrorism must continue until all terrorist groups are eliminated, particularly in Idlib.

All countries must work to help prepare the ground for the return of refugees and reconstruction of Syria, he added.

The Iranian president also said the “illegal presence and intervention” of the US in Syria must end immediately.

The three countries must keep up working until peace and stability has fully restored in Syria, Rouhani concluded.

Return of Refugees High on Agenda

Putin in turn said he is pleased to see efforts by the three countries have prepared the ground for Syrians to decide their destiny.

“Efforts by Russia, Iran and Turkey have led to serious progress and we hope today’s meeting will be highly effective and allow for the final solution of the Syria conflict,” he said.

Putin said Russia supports the return of refugees to Syria and believes an international plan needs to be created to facilitate the process.

The Russian president said efforts are needed for reconstructing Syria’s industries, agriculture and infrastructures, to prepare the ground for the return of more refugees.

Anti-Terror Fight Should Be Coordinated

Erdogan, for his part, stressed the need for immediate ceasefire in Idlib, saying aerial bombardment of the region must be stopped.

“We should take a step to end these bombardments. Civilians in the region experience big fear and we face waves of immigration from this region,” he said.

However, Erdogan said, taking measures to fight terrorist groups in the region is of utmost importance, stressing that these measures should be coordinated with all players.

During the Friday talks, Erdogan asked his Russian and Iranian counterparts to include the word “ceasefire” in an article of the Summit’s final communiqué, but his call was rejected by Putin, who argued the terrorists are not represented in the Tehran Summit, so a ceasefire without their commitment is not possible.

The three sides finally agreed on urging all militants and terrorists to lay down their arms. This was supposed to be added to the statement, but Turkey finally withdrew its objection, and the statement was released as prepared by the three countries’ foreign ministers.