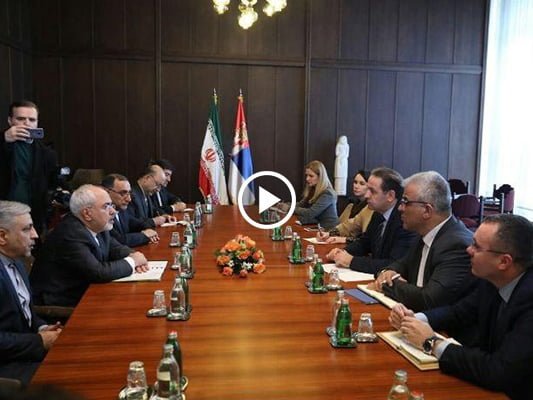 Serbian Minister of Trade, Tourism and Communications Rasim Ljaji and President of the country’s National Assembly Maja Gojković, in separate meetings with Iran’s foreign minister, have called for promotion of ties with Tehran.

In a Tuesday meeting in Belgrade, Ljajić and Iranian Foreign Minister Mohammad Javad Zarif discussed various dimensions of bilateral trade and economic relations, as well as obstacles to the expansion of ties between Iran and Serbia and the ways to remove them.

Energy ties, banking cooperation, business facilities, consular cooperation, and tourism were among other key points discussed by the two officials.

Earlier in the day, Serbian Parliament Speaker Gojković said her country welcomes the expansion of bilateral relations and parliamentary cooperation between Tehran and Belgrade.

Referring to her earlier trips to Iran, she further called the two visits successful and memorable.

For his part, Zarif expressed his satisfaction with the growing trend of bilateral relations in all fields, especially in the economic and commercial spheres.

Referring to Tehran’s resolve to expand ties with the Republic of Serbia, the Iranian foreign minister called for closer cooperation between the two countries at the international communities.

The Iranian top diplomat arrived in Belgrade on Monday as the first leg of his tour of the Balkans and Eastern Europe. Bulgaria, Croatia and Bosnia and Herzegovina are the next destinations of Zarif and his accompanying delegation.