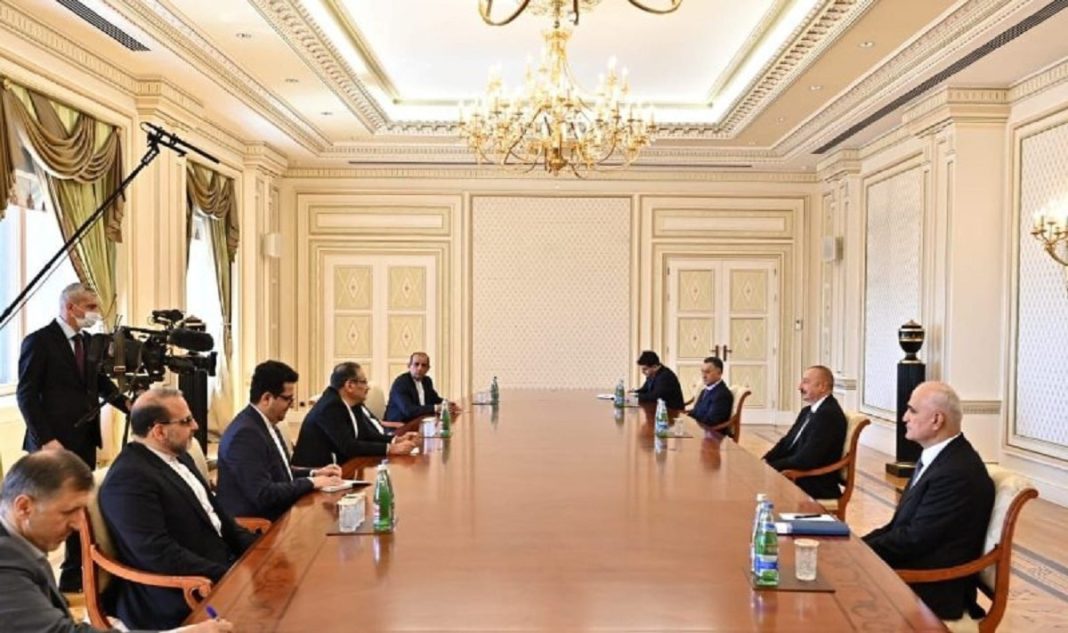 The secretary of Iran’s Supreme National Security Council (SNSC), in a meeting with the president of the Azerbaijan Republic, said Tehran will not allow any outside actors to drive a wedge between the two nations.

Rear Admiral Ali Shamkhani met with Azerbaijan’s President Elham Aliyev on Friday in Baku as part of his tour of the Caucasian region.

Shamkhani stressed the importance of relations between Iran and the Republic of Azerbaijan, saying the Islamic Republic does not have any restrictions to promote the bilateral ties.

He added the administration of Iranian President Ebrahim Raisi seeks to deepen and expand relations with its neighbors, and in that context, the Islamic Republic is resolute to expand its ties with the fellow Shia neighbor Azerbaijan in all fields.

The SNSC secretary also said the common cultural roots between Iran and Azerbaijan Republic helped the two nations forge stronger and more cordial bonds during Aliyev’s predecessor and father, Heydar Aliyev, over the past decades and expressed hope the two nations would continue to build on the brotherly ties.

Shamkhani said Iran is adamant to counter those who are seeking to tarnish relations between Tehran and Baku.

He added after a Russian-brokered ceasefire deal between the Republic of Azerbaijan and Armenia following the six-week war in 2020 which left Baku largely in control of the disputed region of Nagorno-Karabakh, conditions are ripe for Tehran and Baku to take advantage of their potential capacities in the transit, oil, trade and energy sectors.

Meanwhile, the Azerbaijani president invited his Iranian counterpart to Baku and said he would also visit Tehran to follow up on previous bilateral agreements