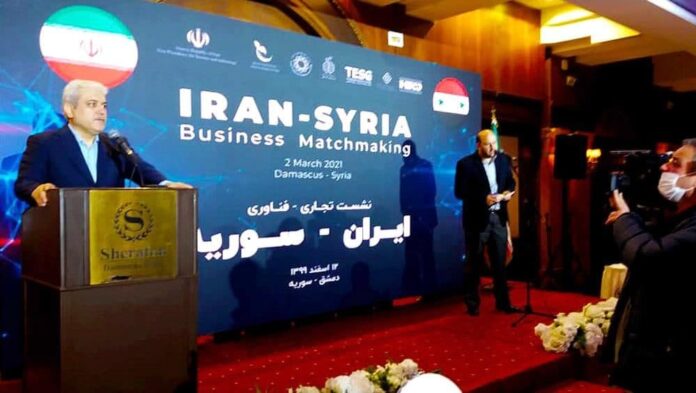 Iranian Vice President for Science and Technology Sorena Sattari, who is in Damascus at the head of a sci-tech delegation, has attended the second Iran-Syria business matchmaking meeting.

Addressing the opening ceremony on Tuesday, Sattari touched upon the developments which have taken place in Iran over the past six years.

“All of you know Iran for its huge oil and [natural] gas reserves. We have the largest hydrocarbon resources in the world. But what has happened in the past few years is the emergence of expert manpower potential and [the emergence of] a new economy alongside the traditional oil-and-gas-driven economy,” he told the gathering, which brought together some 40 Iranian and Syrian technological bodies.

“Today, more than 40 knowledge-based companies are present in this conference, which is only a small part of the events that have happened in the domain of technology in Iran,” he explained.

“Today, Iran has the largest startups in the region in the domains of communications and information technology, nanotechnology, biotechnology, aerospace, stem cells and other modern technologies,” Sattari added.

Sattari, who is also the head of the Iranian Elites’ Foundation, said the new generation of knowledge-based, technological and innovative companies in Iran has been developed by young and educated manpower.

“These young people and modern companies amount to the future of Iran’s economy. They serve as a bulwark against international sanctions and threats. This new generation of companies is learning how to export their products to international markets,” he said.

“Sales of products by Iranian knowledge-based firms have reached more than $12 billion.
This economy has caught up with the existing, traditional markets in Iran,” said Sattari.

“The oil, gas and petrochemical economies have seen considerable growth. I hope the meetings today will establish a proper link between the two Iranian and Syrian sides, so that technological and knowledge-based exchanges between the two countries will increase. Iran knows no limits for trade and technological exchanges with Syria,” he said.

The vice president also touched upon the opening of the Iranian Innovation and Technology Centre in Syria.

“We have established similar centres in China and Kenya, too, and tomorrow the third such centre will be inaugurated in Syria. We hope this office will help develop trade and technological exchanges between the two countries in the knowledge-based domain,” Sattari said.

Sattari added governments have a responsibility to establish a connection between university students, professors, technological companies, businessmen and industrialists, so that they can find each other in different countries and have technological and scientific exchanges with one another.

“The Science and Technology Department of the [Iranian] president’s office also seeks to develop technology diplomacy,” he said.

Sattari said diplomacy technology is, in fact, a new form of diplomacy.
“We introduced this concept because of our technological potentialities in the world, and we hope this gathering will result in good events between Iranian and Syrian technology experts. I invite all of you to come to Iran and visit Iranian knowledge-based firms and rich history,” said the vice president.

The second meeting of Iranian knowledge-based companies and Syrian technological institutions was held aimed at creating an atmosphere to present Iranian products. On the first day of their stay in Syria, representatives from Iranian knowledge-based and innovative companies took part in face-to-face meetings with Syrian technological firms in order to get familiar with the business climate in Syria. These meetings were held in cooperation with the Science and Technology Department of the Iranian president’s office and the Iranian Innovation and Development Fund.

In the meetings, Iranian and Syrian companies introduced to each other their achievements and capabilities in order to secure a market for t their exports.

The first face-to-face meeting of 40 Iranian knowledge-based, technological and innovative companies was held in July 2020 at the same time that the Syrian Reconstruction Exhibition was underway. Fifteen companies were present at the national pavilion of knowledge-based companies at the exhibit.