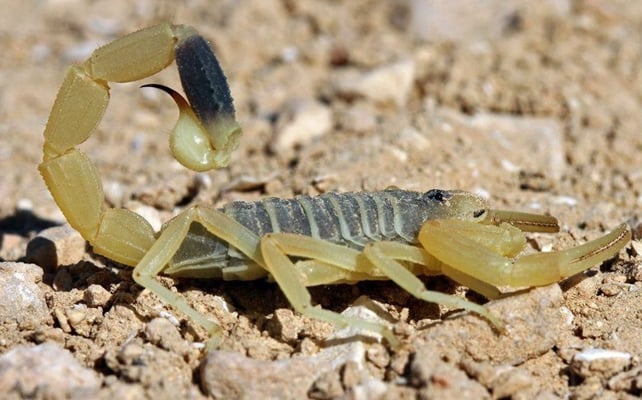 The trade of scorpion venom has turned into one of the most lucrative emerging businesses in Iran, tempting many opportunists to get engaged in hunting or farming scorpions.

These days, profiteers are bearing down on scorpions and hunting them for financial gain.

When we go to the desert, in addition to heat, thirst, possibility of sinking in quicksand and hidden holes, we should watch out for creatures such as snakes and scorpions because some of them are venomous.

Scorpions are nocturnal animals that stay motionless in a corner by day and leave their shelters by night and go hunting. When they feel danger, they run, and when there is no way to run, they sting to defend themselves, and their sting is very poisonous.

Scorpions mostly live in hot deserts. The most dangerous species of scorpions live in hot areas in Iran. They hide under rock and in holes, waiting for their prey.

The scorpions living in Iran are among the most dangerous and deadly types of scorpion in the world because they have stings in their tails.

The Iranian yellow scorpion is one of the most dangerous types of scorpions in the world, though its sting is not deadly. This type of scorpion lives in the provinces of Kerman, Yazd, Isfahan, Markazai, Qazvin, Semnan, Kermanshah, Bushehr and deserts around the Tehran.

The fat-tailed scorpion is one of the most dangerous types of Iranian scorpion. It has a violent appearance and lives in slots between rocks and in the middle of plants. It can climb any surface, but glass. It kills rats and lizards and feeds on the liquid in their bodies. If stung by this type of scorpion, humans come down with nervous disruption and their hearts are affected.

Given the climatic conditions, scorpions in Khuzestan province are deadlier. It would be interesting to know that if a scorpion is taken to this province from other areas, its poison will become several times stronger and deadlier because of the climate.

The most expensive liquid in the world is the scorpion’s poison. According to a report by the Young Journalists Club (YJC), each gramme of dried scorpion poison costs IRR 800,000,000 (around $7,000). And that is why trade in scorpion poison is booming day by day as it is a lucrative business. This is one of the emerging jobs with a very good income, encouraging more and more people to get involved in this business.

The scorpion poison contains protein and is used to treat many diseases such as rheumatism, inflammation of the colon, multiple sclerosis and cancer abroad. Farming scorpions is very lucrative.

Experts and university professors have made a lot of efforts to hold training courses in order to promote this emerging business.

There are 60 types of scorpions in Iran, four type of which have deadly poisons. Given the importance of the issue, training courses have been held across the nation, teaching around 50 thousand students about how to identify, hunt, farm and extract poison from scorpions. It is noteworthy that such moves in recent years have prompted many people to attend these classes. After finishing the course, they begin to hunt scorpions illegally in order to make a profit.

“Some companies are using experts and university professors to hold classes on how to farm scorpions in order to make huge profits,” says Alireza Naderi, an expert on invertebrate animals.

“Farming scorpions in Iran is a very tough job because not much experience is available in that regard,” he says.

He notes that there should be restrictions on farming species such as snakes and scorpions because “if any individual wants to collect thousands of scorpions and snakes and use their poison, the population of this animal will be put in danger.”

“Given that these creatures are in danger of extinction, the Iranian Department of the Environment is seriously working to prevent the activities of profiteers in order stop illegal activities and prevent the extinction of this species which is useful in treating many diseases,” he says.