Science can solve the problem of particles 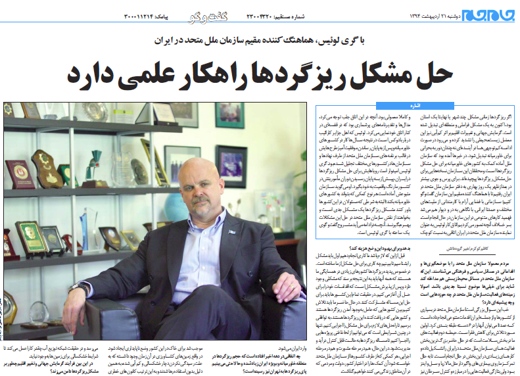 Once a problem limited to a few cities or provinces, the question of dust particles has now turned into a transnational and regional headache. Water shortages – triggered by global warming and climate change – have precipitated this environmental challenge. If left unattended, the problem could turn into a serious crisis for the entire Middle East in the not-too-distant future.

The issue has even flown its way into the United Nations where officials have expressed readiness to help Middle Eastern countries with the problem and researchers have offered their own prescriptions.

Gary Lewis, United Nations Resident Coordinator and the UNDP Resident Representative in Iran, has said his agency is ready to offer a helping hand, provided that officials in the affected countries admit that dust storms pose a grave threat and call for UN help in efforts to make this problem a thing of the past.

Jamejam daily has published an interview with Mr. Lewis about the particles and his agency’s plans to tackle the issue. The following is the translation of excerpts from his remarks in the interview:

The UN has taken multiple measures in a number of countries, including Iran. Those measures have been mainly implemented to reduce poverty; boost health – in Iran it largely focuses on tackling diseases such as malaria, tuberculosis, HIV/AIDS and cancer; offer humanitarian and refugee-related services; help sustainable environmental development; contain drugs [trafficking]; and manage natural disasters.

First of all, the problem should be identified. Iran’s neighbors should admit that there is a problem and then we can begin to explore solutions. We need to help countries – those in which dust particles are produced and those which are at the receiving end – reach an agreement before we can work out solutions to the problem. […]

The UN stands ready to help the government and people living in dust-prone regions, both at counseling and implementation levels.

The origin of particulates in Middle East

They are coming from the countries in the west and southwest of Iran which are on the Persian Gulf. Statistically, particulates mainly enter Iran from Iraq.

Dust particles, from Iraq to Tehran

Currently shortage of water is to blame for dust storms. Water levels at the Tigris and Euphrates – two rivers which largely help with the soil fertility of the surrounding areas and could prevent particulates from entering Iran – are on the decline. This has aggravated the situation. Lack of soil sustainability which is a direct result of urbanization is also to blame for the dust issue. […]

Environmental problems account for 10 percent of particulates in Iran and the remainder has its roots beyond Iran’s borders. Water shortages worsen the problem of particles. Attention should be paid to the ways agricultural lands are used inside the country. […]

Global warming and climate change accelerate this trend. When the earth gets warm and weather patterns change, water resources are depleted and the lands grow dry. This helps winds easily lift the particle and move them to cities. What matters here is the way we exploit and manage our natural resources.

[…] Iran needs to take practical measures in this regard. Efficient management is needed when the country faces a crisis and this is not what one organization can handle on its own. Management on a larger scale is needed for water resources. The UN will lend support if the Iranian government asks for its help.

[…] The United Nations can help the [Iranian] government on three fronts: 1) It can coordinate between regional countries and use diplomacy to create convergence between them on addressing and solving the problem. 2) It can take steps at a national level and help each government independently. For instance, it can see help residents of Khuzestan. 3) It can hold a conference bringing together the Middle Eastern countries which are interested in solv­ing this problem. This can help them share scientific and operational strategies for tackling the dust issue.

[Iran’s environment chief] Mrs. Ebtekar is trying to bring regional countries together to take steps toward solving the dust issue [establishment of a regional fund]. History suggests that countries show least interest in carrying out a plan when they reap no benefits.

The UN has the responsibility to bring countries together and convince them that a problem which has now plagued Iran is likely to take a toll on them – Iraq, Saudi Arabia and Kuwait – down the road.

Iraq is another thorny issue. Iraq which is mainly to blame for the dust storms in Iran is now grappling with security problems and the onslaught of ISIL and other terrorist groups. […] There are up to 80 centers in Iraq which cause dust storms. We need to identify those regions and take initial steps to stop the spread of this [harmful] phenomenon. […]

We know about the danger spots in Iraq, but we cannot take proper measures – such as planting trees, mulching and effective management of water resources and agriculture – due to security problems in that country.

How long does it take for the dust to settle?

[…] Ten years have passed and we are now at a juncture in which we are trying to find solutions. We need to allow for another ten years to see everything return to normal, if practical measures are taken toward curbing the problem of particles.

What does science say?

Science can offer a solution to the problem of dust storms. Conditions can be normal like in the past if the countries affected by dust particles show strong determination to solve the problem. We need to operationalize the existing solutions.

For their part, humans fail to help the environment. Instead of blaming the politicians for their decisions, we should look at what we are doing. […] Today humans are heavily engaged in their routines, but ignorant of the future and the long-term consequences of their inattention to the environment. […] We need to change our mindset and try to solve the problems that lie ahead.

[…] We need to take into account the eastern part of Iran. Shrinking water levels in the Helmand River and Hamoon Lagoon also help dust particles kick up storms. […] Wind takes these particles to Afghanistan. We need to pay close attention to the situation in Iran’s neighbor and do something for the eastern part.