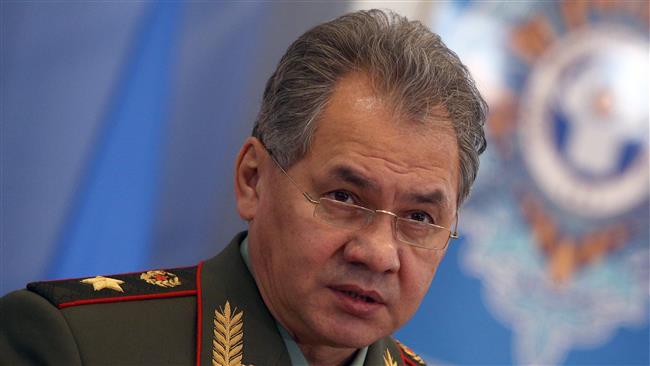 Russian Minister of Defense Sergei Shoigu has arrived in Tehran to hold talks with senior Iranian officials on the latest regional developments and ways to promote defense and military cooperation.

Shoigu, who arrived in Tehran on Sunday at the head of a delegation, is scheduled to sit down with Iranian President Hassan Rouhani later in the day.

In the meeting between Dehqan and Putin, the Russian president expressed satisfaction with mutual defense and security cooperation, which he said is in line with common interests, and called for enhanced ties within the framework of implemented agreements.

Iran and Russia signed an agreement on the delivery of the S-300 missile system to Tehran, which was banned by Moscow back in 2010 under the pretext that the deal was covered by the fourth round of the UN Security Council sanctions, which barred hi-tech weapons sales to the Islamic Republic.

In April 2015, the Russian president signed a presidential decree paving the way for the long-overdue delivery of the missile defense system to Iran after Iran and the P5+1 group of countries – the United States, France, Britain, China and Russia plus Germany – reached a mutual understanding on Tehran’s nuclear program in the Swiss city of Lausanne.

Russian presidential aide for military and technological cooperation Vladimir Kozhin said on Saturday that the technical procedures of the S-300 deal are currently underway.

“Due payments are made in accordance with it. We are strictly observing the procedure set forth in the contract. Iran is completing the work on its own details, and we on our own. The first consignment of the systems is ready to be shipped,” Kozhin stated.