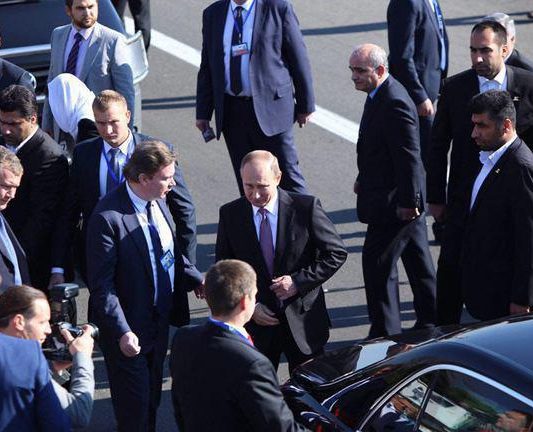 President of the Russian Federation Vladimir Putin, who has just landed in Tehran, is going to meet with high-ranking Iranian officials and attend a trilateral meeting with presidents of Iran and Azerbaijan Republic.

The Russian president will first hold a meeting with his Iranian counterpart Hassan Rouhani in Saadabad Palace, and then meet with the Leader of Iran’s Islamic Revolution Ayatollah Seyyed Ali Khamenei. Upon arrival at Mehrabad Airport, Putin was welcomed by Iranian Economy Minister Masoud Karbasian.

He will finally take part in a trilateral meeting with Rouhani and Azeri President Ilham Aliyev, who has earlier arrived in the Iranian capital.

The three presidents will hold the second trilateral meeting between leaders of Iran, Azerbaijan Republic, and Russia. The first meeting was held in Baku.