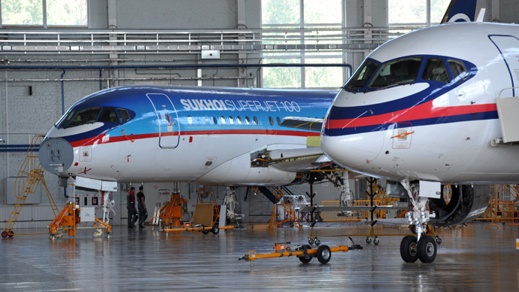 The Russian minister of transport has said that Moscow is negotiating with Iran on the supply of Russian passenger planes Sukhoi Superjet 100 to Iran.

Transport Minister of the Russian Federation Maxim Sokolov said that Russia and Iran are negotiating the supply of Russian passenger planes Sukhoi Superjet 100 to Iran.

“Such negotiations, as far as I know are taking place,” Sokolov said, answering a question about whether it is possible to deliver the SSJ100 to Iran.

“It is profitable to offer not just the Superjets but also other vehicles and machinery, as it raises certain interest in our Iranian colleagues,” RIA Novosti quoted the Russian minister as saying.

He further said that last year within the framework of the summit of transport ministers of the Caspian region, Russia actively discussed the possibility of cooperation with Iran and the Iranian delegation even visited the port of Olya in the Astrakhan region.

“The Iranian colleagues examined the infrastructure with great interest, including the ‘Sviyazhsk’ multimodal complex which will now be operational and be used to pull cargo into the country,” Sokolov said.

Transportation between Iran and Russia may be possible through the Caspian Sea as well as other transport modes on land.