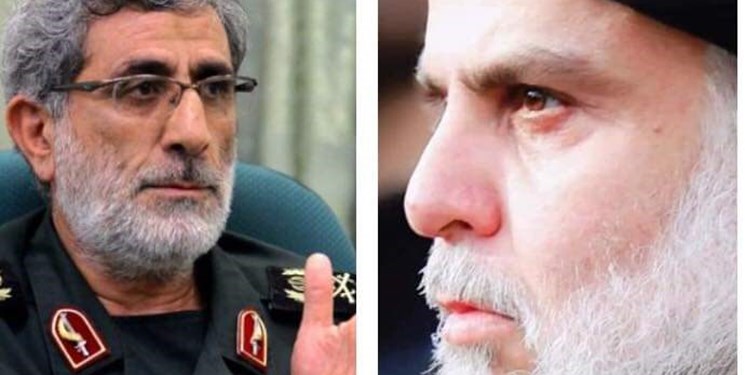 An informed political source has provided details of the meeting between Brigadier General Ismail Qaani, commander of the Quds Force of the Islamic Revolution’s Guards Corps, and Muqtada al-Sadr, the leader of Iraq’s Sadr faction in the Iraqi city of Najaf.

The source told Al-Yaum news website that Qaani met with Sadr at the Iraqi cleric’s house. He added that Qaani and Sadr examined the unification of the positions of the Shia political factions so that the Sadr group could form a faction within parliament with a Shia coordination committee called the Coordination Framework.

The source pointed out that the purpose of forming this faction is to form the Iraqi government.

He said Sadr insisted that Nouri al-Maliki, the leader of the State of Law coalition, not be present in the new government.

According to the source, Sadr said if Maliki does not participate, the Sadr group will form a faction with the Coordination Framework.

The source added that Qaani and Sadr also discussed a range of other issues including the need to take measures to fight corruption and to criminalize any effort to normalize ties with the Zionist regime.

According to this report, the Quds Force commander and the Iraqi cleric also underlined the need for the withdrawal of foreign forces from Iraq and for the protection of the Popular Mobilization Units.

The force also known as the Hashd volunteer was instrumental in the fight against Daesh that led to the terrorist group’s ultimate defeat in Iraq.