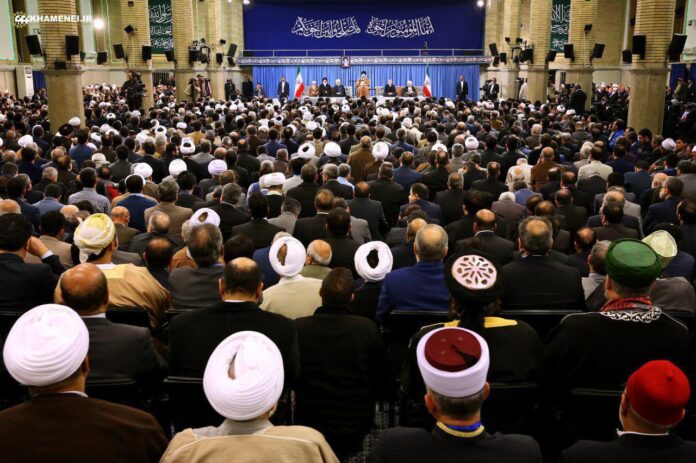 Leader of Iran’s Islamic Revolution Ayatollah Seyyed Ali Khamenei says the US administration’s intention to recognize Jerusalem al-Quds as the capital of the Israeli regime indicates their failure in the case of Palestine.

“That they [enemies] claim they want to declare al-Quds as the capital of the occupied Palestine [Israel] shows their desperation and failure,” Ayatollah Khamenei said in a Wednesday meeting with top Iranian officials, ambassadors of Muslim countries, and visiting gusts of Islamic Unity Conference in Tehran.

“In [dealing with] the issue of Palestine, their hands are tied and they cannot advance their goals,” he added.

“The Islamic Ummah [society] is the ultimate winner, and the Palestine will be liberated. The Palestinian nation will emerge victorious,” the Leader noted.

Ayatollah Khamenei went on to say that the enemies, including the US, the global arrogance, the Zionist regime of Israel, and the reactionaries in the Muslim society, have all queued up to confront the Islamic Ummah and the path of Prophet Muhammad (PBUH).

“The Pharaoh today is the US, the Zionist regime and all their followers in the region who want to wage war in the Middle East,” the Leader noted, adding that this is the United States’ plot.

“The US statesmen, themselves, have declared that we should wage a war in the region so as to ensure the security of the Zionist regime.”

The Leader further expressed regret that today there are rulers and elites in this region who do whatever the US wants them to, even if it is against Islam.

“We have no conflict with Muslim nations, we support unity,” the Leader noted, adding, however, that certain countries seek war instead of unity.

“The result of what certain regional countries are doing is their own annihilation, as the holy Quran says,” he added.

No Sectarian War to Break Out in Middle East

The Leader went on to say that the enemies of Islam fanned the fuel of tension in the Middle East so as to cause a sectarian war, but it did not and will not happen.

“We stood against those who were bought off by the enemy, and thank God we won. However, their focus was not on a religious war, but a tribal one. The number of Sunnis killed by Daesh [ISIS] was not comparable with those of Shiites.”