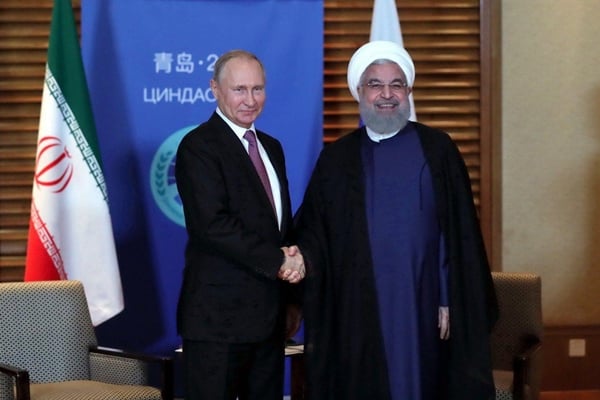 Russian President Vladimir Putin says his government is eager to see Iran joining the Shanghai Cooperation Organisation as a full member, in a show of friendship between Tehran and Moscow.

“Through the years, Iran has strongly contributed to the SCO’s efforts as an observer member and Russia’s position is to support Tehran’s full membership in the organization,” Putin said on a Saturday.

He made the remarks in a meeting with his Iranian counterpart Hassan Rouhani on the eve of the 18th meeting of the heads of state and government of Shanghai Cooperation Organisation scheduled to be held in China’s coastal city of Qingdao on Saturday and Sunday.

Iran has held observer status in the security bloc since 2005, along with Afghanistan, Belarus and Mongolia, and has been declaring its willingness to become a full-fledged member for years.

The security bloc granted membership status to India and Pakistan last year, in its first expansion in sixteen years after its 2001 creation by China, Russia and four ex-Soviet Central Asian republics of Kazakhstan, Uzbekistan, Tajikistan and Kyrgyzstan.

Bright Prospects for Economic Cooperation
Putin said Moscow will keep up deepening cooperation with Tehran in various fields, including energy and defence.

“There are good prospects for mutual cooperation in all sectors, including economic ones,” he said.

On JCPOA, the Russian president censured the US withdrawal from the 2015 nuclear accord as “illegal”, stressing Russia will continue to work with other parties to the multi-party accord to support JCPOA.

Putin also hailed Tehran-Moscow cooperation to promote stability in the region, saying the two countries will continue to work towards settlement of the Syria conflict.

Fruitful Anti-Terror Collaboration
Rouhani, for his part, said Tehran attaches great importance to its cooperation with Russia to improve security in the region.

“Iran-Russia cooperation against ISIS and other terrorist groups has proven effective and fruitful and will bee maintained,” he said.

The Iranian president said there are vast capacities for cooperation between Tehran and Moscow, adding Iran welcomes Russian firms and investors willing to enter its markets.

On JCPOA, Rouhani hailed Russia’s great role in keeping the deal in place, expressing hope its efforts to push other sides of the nuclear deal to fulfill their commitments will bear fruits.