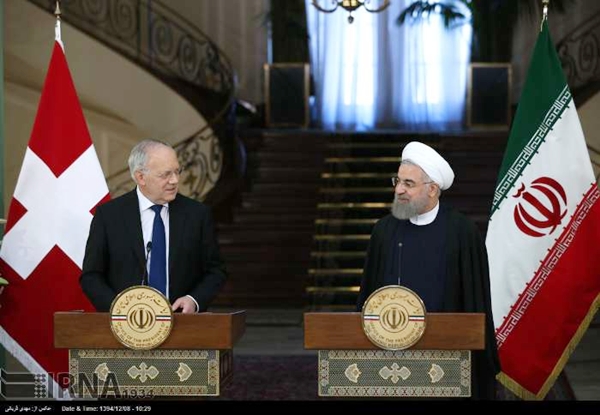 President Hassan Rouhani praised the nation’s exceptional turnout of in the elections and said their massive participation created very glamorous and spectacular scenes.

The President made the remarks here on Saturday in a joint press conference with his Swiss counterpart.

He referred to independence, national sovereignty, democracy and elections as the elements which bring the two countries together as they both share them as the foundations of their governments’ systems.

He went on to say that during his talks with the Swiss President, he discussed issues of mutual interest with him specially the economic topics.

According to the President, they also reviewed ways of further activating banking relations between the two countries as well as insurance issues which account for basic grounds of mutual cooperation.

The two countries are also cooperating to get Iran’s membership in the World Trade Organization .

The Iranian President went on to note that the two countries signed 6 agreements on scientific and technical cooperation and agreed on furthering tourist exchanges given the high capacities of both countries in this area.

President Rouhani also said they touched upon the issue of human rights, explaining that Muslims in Europe were presently suffering much because of the Islamophobia encouraged in the continent due to influx of people there who were fleeing terrorist threats.

The Swiss president is to confer with other Iranian officials on expansion of bilateral cooperation as well.

He heads a high-ranking political, economic, and scientific delegation in his official visit to Tehran.

Promoting the Tehran-Bern ties in political, economic, trade, judicial, and cultural fields is among the objectives of the Swiss president’s Iran visit.

The fact that tens of major Swiss industrialists, investors, and entrepreneurs are accompanying the Swiss president shows that Bern is keen to develop its relations with Tehran, particularly after the recent termination of nuclear-related anti-Iran sanctions.