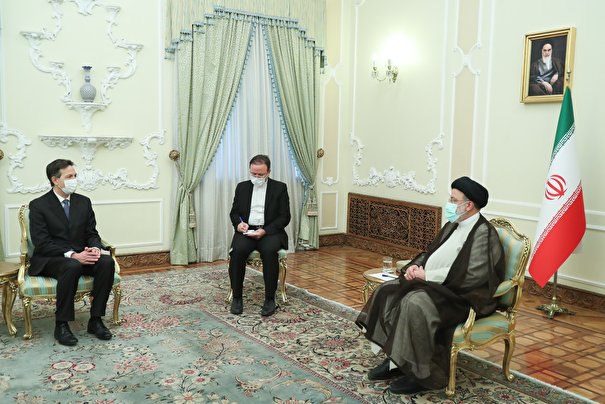 Iranian President Ebrahim Raeisi has called on Europe to resist pressure tactics employed by the United States and not be influenced by them.

After receiving the credentials of new Swiss Ambassador to Tehran Christian Dussey, the Iranian president said Switzerland is expected to maintain its independent role in the face of the unilateral policies of the United States.

“Switzerland has always played a positive role in maintaining and promoting peace,” Raeisi told Dussey in Tehran on Monday.

The Swiss ambassador said for his part that Iran is a country with an ancient and brilliant civilization adding that for more than a hundred years the Islamic Republic and Switzerland have had good relations in the political, cultural, economic and scientific fields.

Dussey expressed hope that the way will be paved for Swiss companies and economic agents to work in Iran.

Switzerland has represented U.S. interests in Iran for many decades because Washington and Tehran have no diplomatic relations.

Iran has long been critical of Europe’s lack of a stance independent from hostile American policies towards the Islamic Republic.

Tehran has repeatedly complained that, contrary to their obligations, European countries have helped the U.S. enforce its sanctions against Iranians.