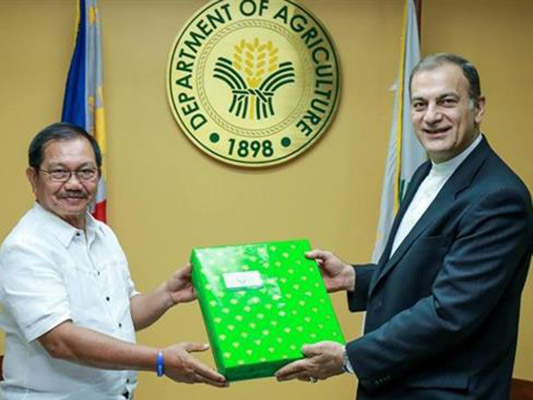 The Philippines may start importing apples from Iran once test analysis and sampling have been approved, the country’s Department of Agriculture (DA) said.

Pinol told Tanhaei that as part of the standard procedure, the Philippine Department of Agriculture is finalizing the Pest Risk Analysis of apple samples.

“I’m still waiting for the results, and if everything turns out okay, rest assured that (the document on) importation of apples is ready for signing,” Pinol was quoted as saying by state-owned Philippine Information Agency.

The Philippine official expressed his interest in other ventures because of the huge market for tropical fruits, particularly banana and pineapple, in Iran. He requested the Tehran government to reduce the tariff on bananas.

At present, the tariff on imported bananas is pegged at 24%, which is lowered against apple export.

The ambassador said Iran is also interested in exporting cherry, pomegranate and pistachios to the Philippines.

“Tehran is willing to collaborate with the Philippine government in research and development for rice, biotechnology and modern farming,” he said.

Pinol noted that the department is willing to assist Iranian companies interested in business ventures on banana and in identifying possible sites for the project, Financial Tribune reported.

Tanhaei also said Iran has a huge demand for abaca, which is widely utilized in making tea bags and wellness products in Iran.

Pinol announced his plans to visit Iran in May to explore agriculture ventures with the country and hold agro-fishery trade shows.