Painting Depicting Crucifixion of Jesus to Be Auctioned in Iran 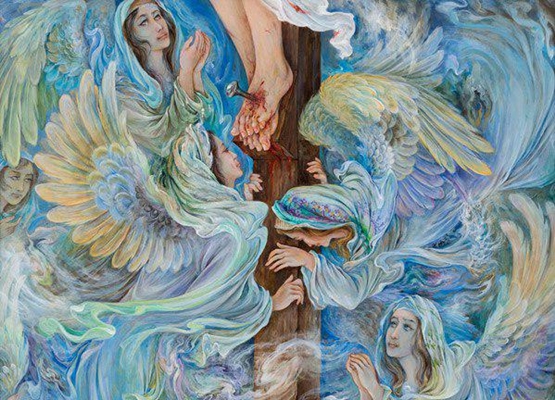 A precious painting by Mahmoud Farshchian, the most famous Iranian miniaturist, depicting the crucifixion of Jesus Christ will go under the hammer at an auction in the Iranian capital, Tehran.

The work of art will be displayed at the 11th edition of Tehran Auction, which is dedicated to Modern and Classic Iranian Art.

Farshchian is indubitably Iran’s most prominent contemporary miniaturist. His works are very popular not only among connoisseurs, but among ordinary people as well. His famous painting called “The Ashura Evening” is highly praised by all those who love Imam Hossein, the third Shia Imam, and are touched by the struggles of Imam Hossein and his faithful followers against the tyranny of the time. Farshchian has donated “The Ashura Evening” painting along with 16 other precious works with religious concepts to the museum of the Imam Reza Holy Shrine in northeastern Khorasan Razavi province.

Moreover, he has designed the metal lattice frames installed on the tombs of Imam Reza, Imam Hossein and Hazrat Abdulazim without expecting any material gain.

Now, one of his most invaluable paintings illustrating the crucifixion of Jesus has entered the Tehran auction and will be put up for sale along with other works of modern and classic Iranian art.

The starting bid for the painting is estimated at between 15 and 20 billion rials. The painting, which has not been given any name, was created with watercolour and gouache in 2006.

The painting depicts the crucifixion and ascension of Jesus. In most Western works of art, the crucified body of Jesus on the cross is illustrated. However, Farshchian says the way he has depicted Christ is different from how his crucifixion is normally illustrated. In Farshchian’s work, the only members of Jesus’ body which can be seen are his legs drawn at the top of the painting. The cross is seen at the centre of the painting like a vertical column stretching from bottom to top. Here, the vertical dimension is accentuated. 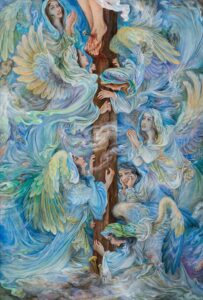 In his painting, Farshchian depicts ascension from the earth to the heavens. The torso of Jesus is not illustrated in the painting, which highlights two spiritual points: First, it refers to what God Almighty says in the Holy Quran: “They said they had killed Jesus Christ, but they had neither killed nor hanged him. They only erroneously believe it happened. They are those who are divided on how Jesus was murdered, and they are in doubt, and they are not aware of what happened, and they only rely on guessing, and they definitely did not kill Jesus; rather, God made Jesus ascend toward Him, and God is omnipotent and wise.” And the second point is that the painting underscores the status of Jesus Christ, who has a status higher than that of angels. Reaching such a high position is one of key mystic issues. Renowned Iranian poet Rumi also elaborates on this point in his poems.

Farshchian’s painting depicts angels spiraling around Jesus’ feet, and nothing else can be seen. The reason is that the artist has focused on Christ’s ascension to the heavens and the experience of Jesus’ presence before God. The painter illustrates a scene where the audience see angels on the ground and Jesus in the skies.

Farshchian has established his own school in the domain of miniature painting. His style conforms to the principles of basic traditional Iranian painting while drawing on new techniques. He has combined all of those techniques with the Western 3-D techniques, contributing heavily to the progress of painting in Iran.

Farshchian’s works have been showcased in hundreds of individual and collective exhibitions both in Iran and abroad, bringing him worldwide fame. Museums, libraries, personal collectors and art lovers take pride in being in possession of his works.