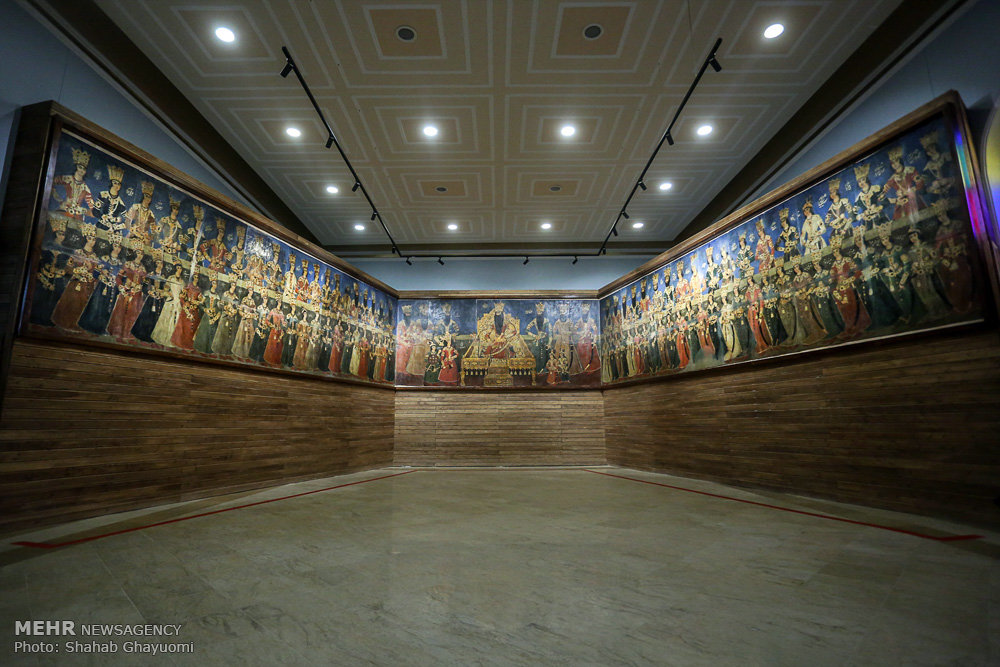 An important artwork of the early 19th century has been put on display in a museum in Tehran after a difficult repair process.

“Saf-e Salam” (saluting line), an old Persian painting dating back to the time of Fath-Ali Shah Qajar, the Iranian king of early 19th century, has been hung on the walls of Tehran’s Negarestan Garden Museum, where it was unveiled during a ceremony on March 4.

According to a Farsi report by ISNA, torn into about 50 pieces, the precious painting of Saf-e Salam was missing for many years. It was transferred to University of Tehran two years ago to be repaired before being permanently displayed in Kamal-ol-Molk Hall of the Negarestan Museum.

“Disappeared for many years, Saf-e Salam is an important Iranian artwork of Qajar era,” Majid Sarsangi, the deputy head of University of Tehran, noted during the ceremony, where the repairers, museum curator, and a member of Iranian Museums General Offices were praised.

“We tried hard to transfer it to the Negarestan Museum,” he added. “Some parts of the painting were severely damaged and needed repair, which was done by specialists.”

Aydin Aghdashloo, the famous Iranian painter, was one of the artists who took part in the painting’s repair process.

“The painting was so damaged that we suggested at first glance it was destroyed by a mortar bomb,” he expressed, “Natural causes and negligence were leading to the complete destruction of such a historical artwork.”

Aghdashloo went on to say that fortunately, the problem solving attitude of cultural officials saved the old Iranian painting.

“I looked at it very carefully. Painted with vivid colours, the painting revives the history,” he said about Saf-e Salam. “However, we have to keep in mind that these types of artworks mustn’t be repaired in a uniform way. The old and the new parts should be distinguishable.”

The reign of Fath-Ali Shah Qajar – 1797 to 1834 – has been somehow the beginning of Iran’s political and governmental decline. “A certain kind of greatness and authority is seen in this era, but it was not the reality,” Aghdashloo explained.

“Such paintings remained as the memories of Fath-Ali Shah’s magnificent court. We should imagine how difficult it was for him to pay reparations to Russia. It was a humiliating scene.”

He then referred to Saf-e Salam as an excellent, notable example of art persistence. “It is an example of how the man illustrates his ideals, desires and success; the Iranian man who built the great complex of Persepolis 2,500 years ago to flaunt its grandeur and win the respect of posterity.”

Aghdashloo referred to the Zand and Qajar eras as the peaks of post-Islamic painting in Iran, and said the art in these two eras depict the moderation of Iran’s national art.”