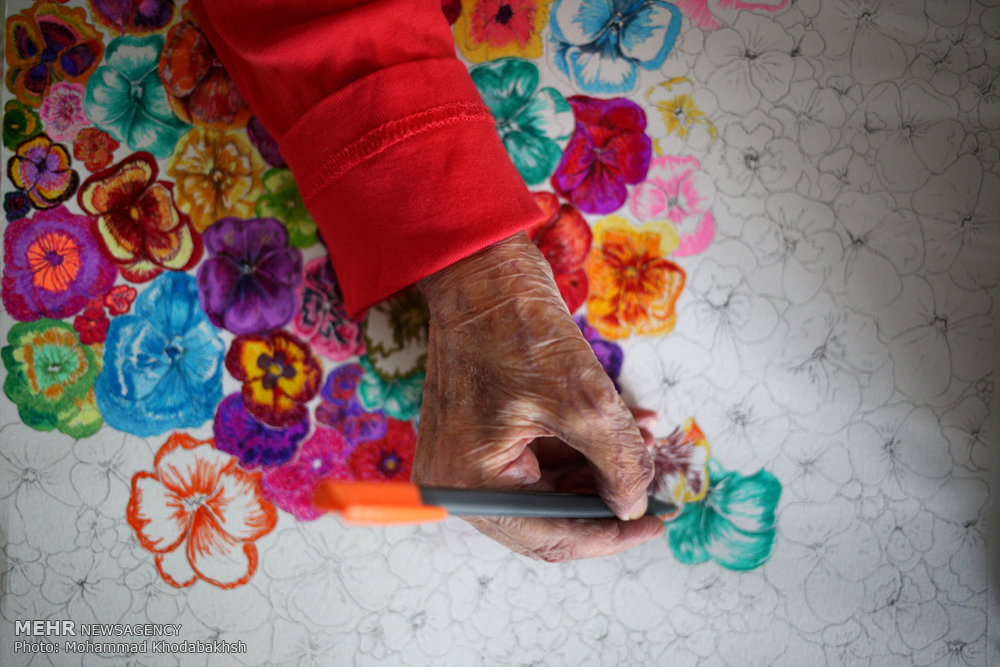 An 86-year-old Iranian woman, who started painting all of a sudden two years ago, has put her paintings on display in an exhibition in the capital city of Tehran.

Ra’fat Sarraf, an 86-year-old Iranian lady who has suddenly started painting at the age of 84, has held an exhibition of her artworks titled “Suddenly at the Age of 84” in Tehran.

Her identity card says she is 86 years old, but, as far as her character is concerned, she is among the youngest 86-year-old people on earth. 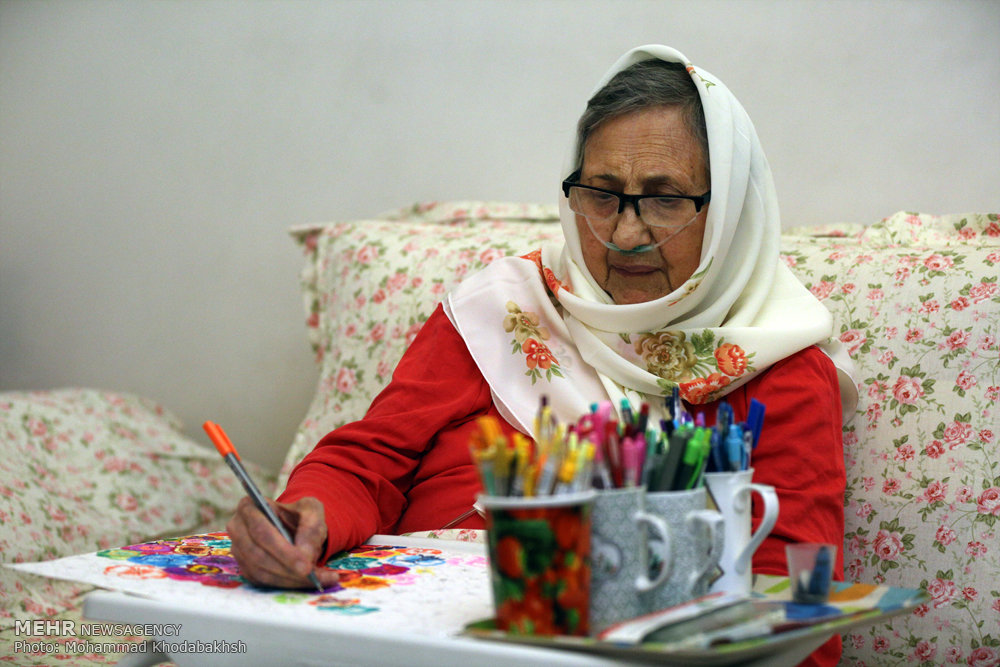 Two years ago, at 84, she suddenly started to admire the wondrous world of colours and became infatuated with painting.

Golestan Art Gallery, in Tehran, is currently hosting an expo of her paintings. Although she might not be able to be physically present at the expo due to senescence and its associated problems, as soon as you take a glance at the artworks, you realize they have been created by a kind grandmother who has revived her childhood memories on pieces of paper using the enchanting power of colours, despite all the exhaustion and lack of stamina typical of her age.

Elaborating on Ra’fat’s works and the way they have been created, Ameneh Sarraf, her daughter and a graphic designer, said, “There is a charity house in the proximity of where we live, in which physically and mentally handicapped children are taken care of. I used to teach painting to these kids. This was concurrent with the deterioration of my mothers’ physical and mental health condition. She had developed allergy and had to scratch herself incessantly. I bought her a number of painting tools, such as pen and paper, to distract her.” 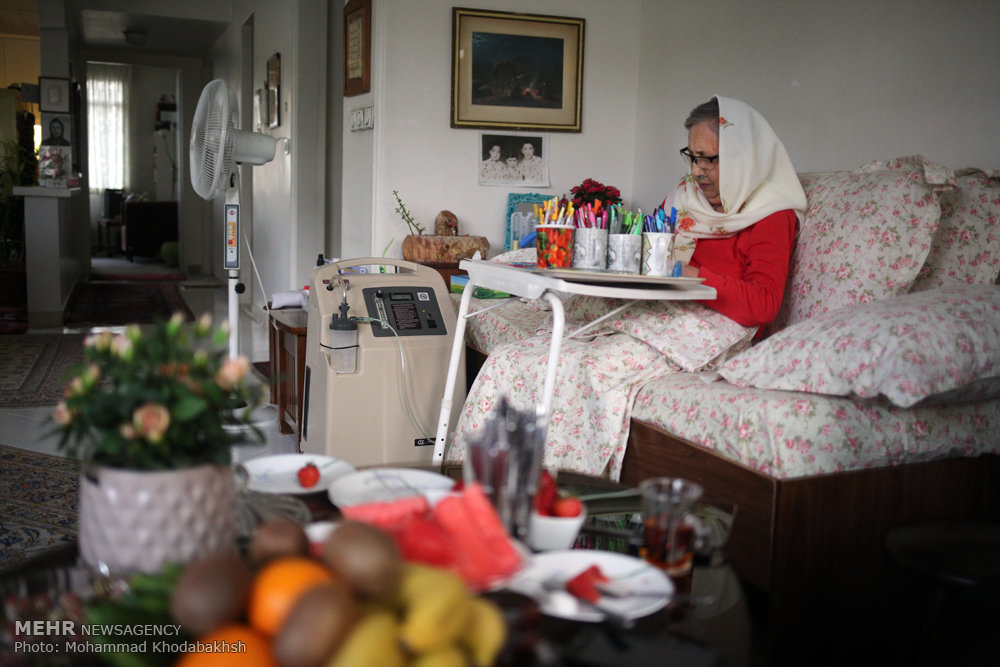 “I told her stories of the handicapped kids and talked to her about the impacts they had on me. [After a while,] I told my mother to paint whatever she liked. She asked me to draw sketches for her so that she could paint them. At first, I refrained from doing sketches for her, as I thought that she should be able to draw them using her own imagination. Nevertheless, this was adding to her stress.”

She said at the beginning, she had to draw quick sketches to enable her mother to recover from her allergy as soon as possible and stop scratching herself.

“After a while, however, the nurses responsible for taking care of my mother, told me that she did not let them sleep, for she stayed up late at night painting the sketches. This came as my mother kept asking me to buy her more painting tools and draw new sketches.” 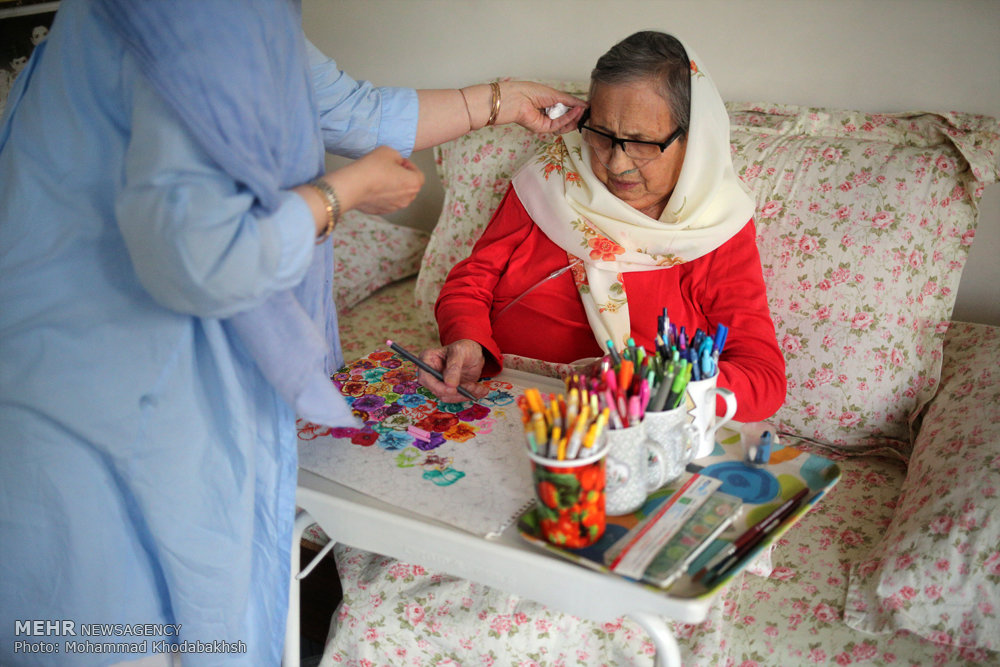 She said following a brief period of time, her mother was able to draw her own forms by altering those of hers.

“She asked me to teach her how to paint light and shadow. Each time that I saw her works, I was surprised at their quality and wondered how she could have created them. I kept asking myself how it was possible. Even, some of the works were created while she was bedridden at hospital.”

“Unfortunately, these days she has become weaker and lacks sufficient energy. She used to do a painting in 24 hours, but, over the past thirty days, she has hardly managed to finish even one.”

A total of 36 paintings by Raf’at on 32*42cm papers have been put on display at the gallery.

Her daughter maintains that Ra’fat has developed her style based on her passion for life. All of these works have been created over the past two years during which she has been struggling with her disease.

Here are photos of the gallery retrieved from various news agencies: