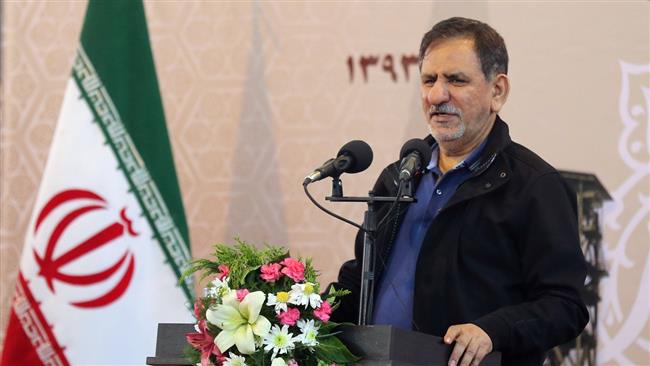 “We have emphasized since the beginning [of the nuclear talks] that no deal is better than a bad deal and we are not after a bad deal at all,” Jahangiri said on Monday.

“We seek an agreement that observes the rights of the Iranian nation,” he added.

The Iranian VP also dismissed the “illegal” sanctions against the country over its peaceful nuclear activities and said Iran’s expert and veteran negotiating team opened the path of dialog and interaction to settle the West’s nuclear dispute with Iran.

Jahangiri further noted that the process of nuclear talks between Iran and P5+1 over the past 1.5 years prevented the imposition of new sanctions against the country.

The Iranian vice president’s remarks came after the Leader of the Islamic Revolution, Ayatollah Seyyed Ali Khamenei said on Sunday that Iran would rather refrain from any nuclear agreement with P5+1 than strike a deal which runs counter to the interests of the nation.

Ayatollah Khamenei added that Iran agrees with the US on that no deal between Tehran and P5+1 would be better than a bad one which would bring about the humiliation of the Iranian nation.

Iran and P5+1– Russia, China, France, Britain, the United States and Germany – are seeking to reach a high-level political agreement by the end of March and to confirm the full technical details of the accord by July 1.

The scale of Iran’s uranium enrichment and the timetable for the removal of anti-Iran sanctions are seen as the major sticking points in the talks.