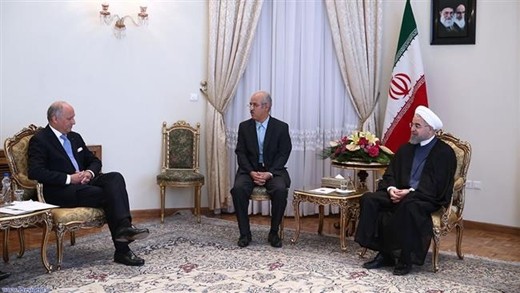 The nuclear agreement benefits Iran, P5+1 and all regional players, President Rouhani said, adding that it is a significant step in turning threats into opportunities.

Iranian President Hassan Rouhani says the nuclear agreement reached between Iran and six world powers should pave the way for further promotion of ties between Tehran and Europe.

“The nuclear agreement should mark [Iran’s] better cooperation with Europe,” Rouhani said in a meeting with visiting French Foreign Minister Laurent Fabius in Tehran on Wednesday.

On July 14, Iran and P5+1– the United States, Britain, France, China and Russia plus Germany – finalized the text of an agreement, dubbed the Joint Comprehensive Plan of Action (JCPOA), in the Austrian capital of Vienna.

Under JCPOA, limits are put on Iran’s nuclear activities in exchange for a set of commitments by the P5+1, including the removal of all economic and financial bans against the Islamic Republic.

Rouhani said that Iran-France cooperation over the Vienna agreement should constitute the base for future relations on the basis of mutual trust.

He said that the nuclear agreement benefits Iran, P5+1 and all regional players, adding that it is a significant step in turning threats into opportunities.

The Iranian president also urged all countries involved in the nuclear talks to do their utmost to “safeguard the agreement.”

“The Iranian government is steadfast in the path of [implementing] the agreement, and we will fulfill our commitments as long as the opposite side is committed to its obligations,” Rouhani said.

Fabius, for his part, said that French companies are eager to return to the Iranian market for job-creating investment, stressing the need for Paris to make up for lost opportunities in relations with Iran.

The French foreign minister arrived in Tehran on Wednesday for a day-long visit to hold talks with the country’s high-ranking officials.

He also held talks with Zarif and then attended a joint press conference with his Iranian counterpart.

Fabius’ visit to Iran is a first by a French foreign minister to the Islamic Republic in 12 years.

Fabius’ visit to Iran, which comes at the invitation of his Iranian opposite number, has raised some criticisms in Iran, especially over France’s hard line toward Iran in the course of negotiations over Tehran’s nuclear program.

Days before the conclusion of the talks on July 14, Fabius urged other negotiators to take a tough stance on Iran, insisting that Paris will not sign off on a deal if Tehran rules out inspections of its military sites as part of the final agreement.

Fabius is also under fire for his role in the export of HIV-contaminated blood products to a number of countries, including Iran, in the 1980s, when he was in office as France’s prime minister.