No plan on Iran agenda to activate new centrifuges 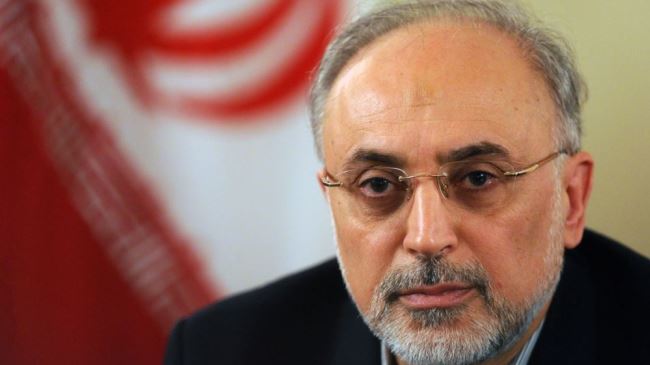 Ali Akbar Salehi, the AEOI chief, says based on an “unwritten” agreement Tehran will not activate more centrifuges, stressing that Iran does not seek to complicate the nuclear case.

Iran’s nuclear chief says nearly 9,000 centrifuges are presently operational in the country, stressing that Tehran will not activate more centrifuges as a sign of its goodwill during its talks with P5+1.

“We currently have nearly 20,000 installed centrifuges, some 9,000 of which are operating and another 9,000 centrifuges are being installed but are not operational. As long as the negotiations are ongoing, we have no intention of activating the 9,000 additional machines,” Ali Akbar Salehi, the director of the Atomic Energy Organization of Iran (AEOI), said on Sunday.

He said this is an “unwritten” agreement to which Tehran remains committed as a sign of goodwill to settle the nuclear issue, adding that the Islamic Republic does not seek to complicate the nuclear case.

He expressed optimism about a final nuclear deal between Iran and P5+1 over Tehran’s nuclear program, saying the two sides have come closer to the comprehensive agreement.

“There is no option left but to interact and [reach] understanding and the two sides must reach an agreement,” the AEOI head noted.

Salehi added that many topics have been discussed in the negotiations with P5+1 including Arak heavy water reactor, Fordow nuclear facility, enrichment and lifting of sanctions.

He said Iran and the six countries have narrowed down their differences in technical and legal aspects to some extent, saying the possibility of striking a deal is “very high” if P5+1 shows political will.

The AEOI head’s remarks came as senior officials from Iran and P5+1 – Russia, China, France, Britain, the US and Germany – are scheduled to resume a new round of talks in the Swiss city of Geneva on December 17.