No Limit on Photojournalists’ Presence in Iran Parliament: MP

A senior Iranian legislator has declared that there is no restriction on the presence of photojournalists in the Parliament, urging reporters to press ahead with their work as seriously as before.

From taking selfies with Mogherini to eating pears; paparazzi put their noses into everything!

It all began when the Iranian Parliament invited dozens of foreign dignitaries to take part in the swearing-in ceremony of President Hassan Rouhani.

A few number of the MPs showed an interest in taking selfies with EU Foreign Policy Chief Federica Mogherini, something which was captured by photojournalists and went viral on social media.

Critics lashed out at the lawmakers (mostly reformists) for their enthusiasm for selfies. It was then when the phrase “selfie-taking lawmaker” was coined and made its way into Iran’s language of politics.

The criticisms were so intense that the peripheral event greatly overshadowed the positive outcome of the oath-taking ceremony. 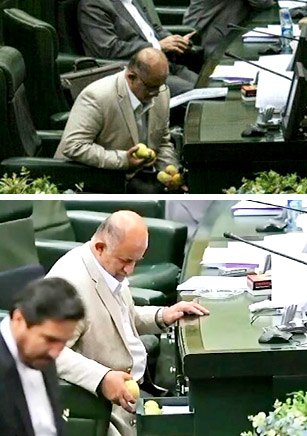 Now, another topic is the front-page news in media and on social networking sites. This time, a conservative legislator leaves an important open session of parliament where lawmakers were reviewing the qualifications of President Rouhani’s nominees for ministerial posts. The MP returns after a few minutes with three pears in each hand, not knowing that photojournalists were capturing every moment of his unusual action! He was widely mocked and criticized for the pears, and the issue sparked a great controversy in coming days.

Following these two events, rumours emerged that some lawmakers (probably selfie-taking MPs and those interested in having snacks in the middle of an official session!) have set aside their political differences (irrespective of whether they are conservative or reformist) and arrived at the conclusion that the way to maintain the Parliament’s dignity is to limit the number of journalists allowed on the parliament floor. Accordingly, the same lawmakers are trying to get this restriction legalized. This issue, even if it is a mere rumour, has prompted a sharp reaction from the advocates of the free flow of information and transparency.

However, a top parliamentarian says no restrictions will be imposed on the presence of reporters and photojournalists in the Parliament, as reported by the Iranian Parliament’s Persian-language news agency ICANA.

“The legislators and the Parliament’s Presiding Board are definitely opposed to such a plan (restricting journalists),” said Behrouz Nemati, the spokesman for the Presiding Board.

He said it would be pointless to limit the activities of journalists who are simply discharging their responsibilities.

Nemati stressed that journalists should not be restricted; rather, lawmakers should correct their behaviour.

“As the cultural observer of the parliament’s Presiding Board, I announce here that photographers and journalists should continue their work seriously because no restrictions have been envisaged for them,” he added.

“A limited number of legislators have aired their grievances [over the presence of reporters], but so far no motion has been submitted to the Presiding Board to call for a limit on the presence of journalists and photographers,” he noted.

He said photojournalists have a duty to capture moments, and added a picture is sometimes more influential than hundreds of meetings and speeches.

“If some of the legislators are opposed to our views, we will definitely enter into talks with them on behalf of the Presiding Board and explain to them that they should exercise more self-restraint,” he said.