IFP has taken a look at the front pages of Iranian newspapers on Saturday, March 16, 2019, and picked headlines from 12 of them. IFP has simply translated the headlines and does not vouch for their accuracy.

All Iranian newspapers on Saturday dedicated their front page headlines to the brutal massacre of Muslim worshippers in two mosques in New Zealand, where a white supremacist inspired by US President Donald Trump killed at least 49 and wounded 50 others.

Also a top story was the remarks made by the Leader of Iran’s Islamic Revolution Ayatollah Seyyed Ali Khamenei about the enemy’s maximum pressure on Tehran, and the need for mobilization of all forces to counter the campaign.

1- MP: Iraq Paid $4 Billion of Its Debts to Iran during Rouhani’s Visit

3- A New Obama Coming: Beto O’Rourke to Stand against Trump from Texas 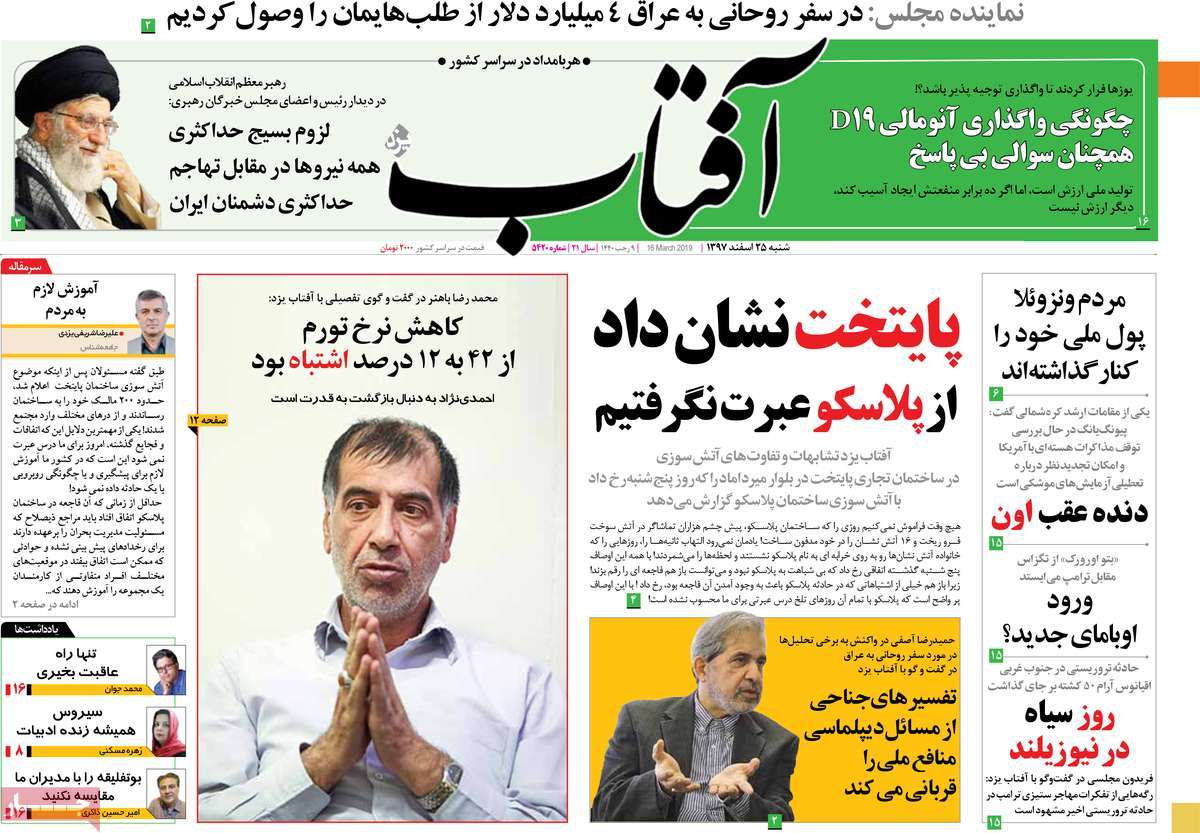 2- Iran Leader: Don’t Accuse Your Opponents of Being on Enemy’s Side 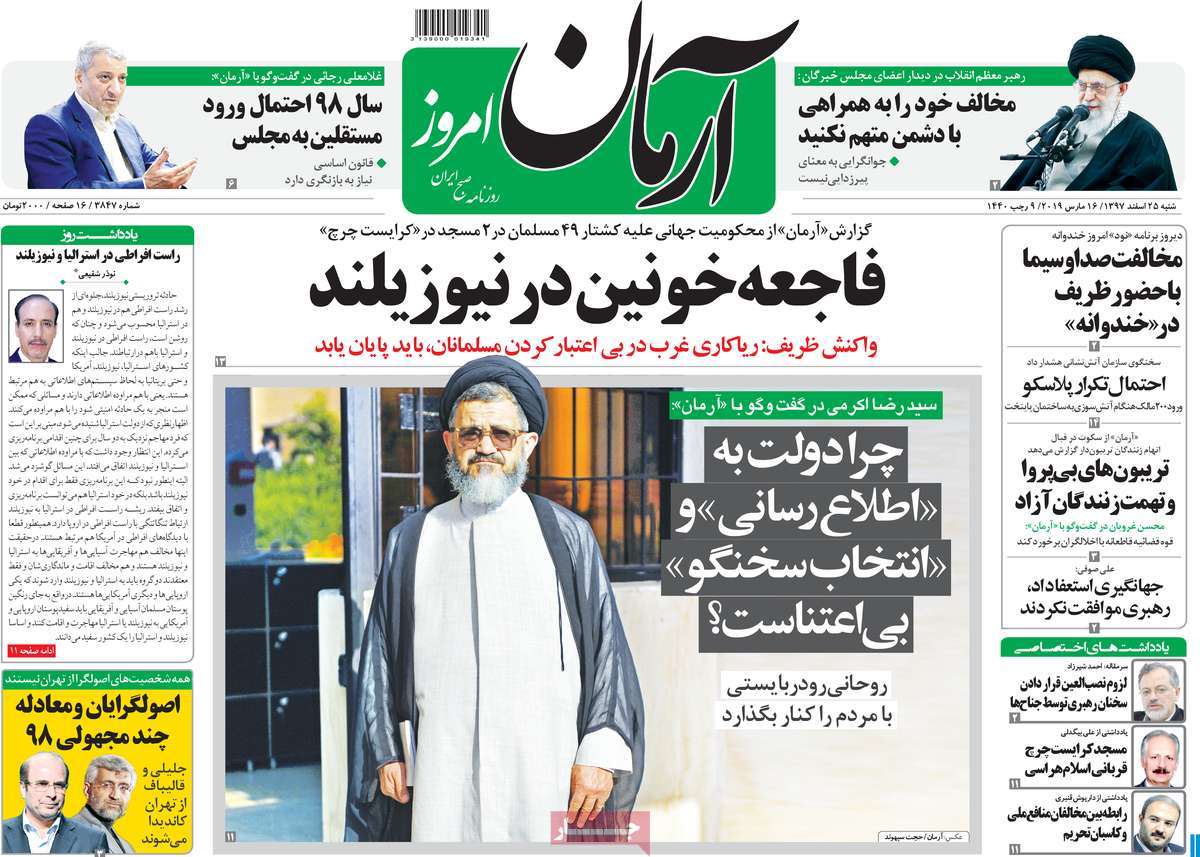 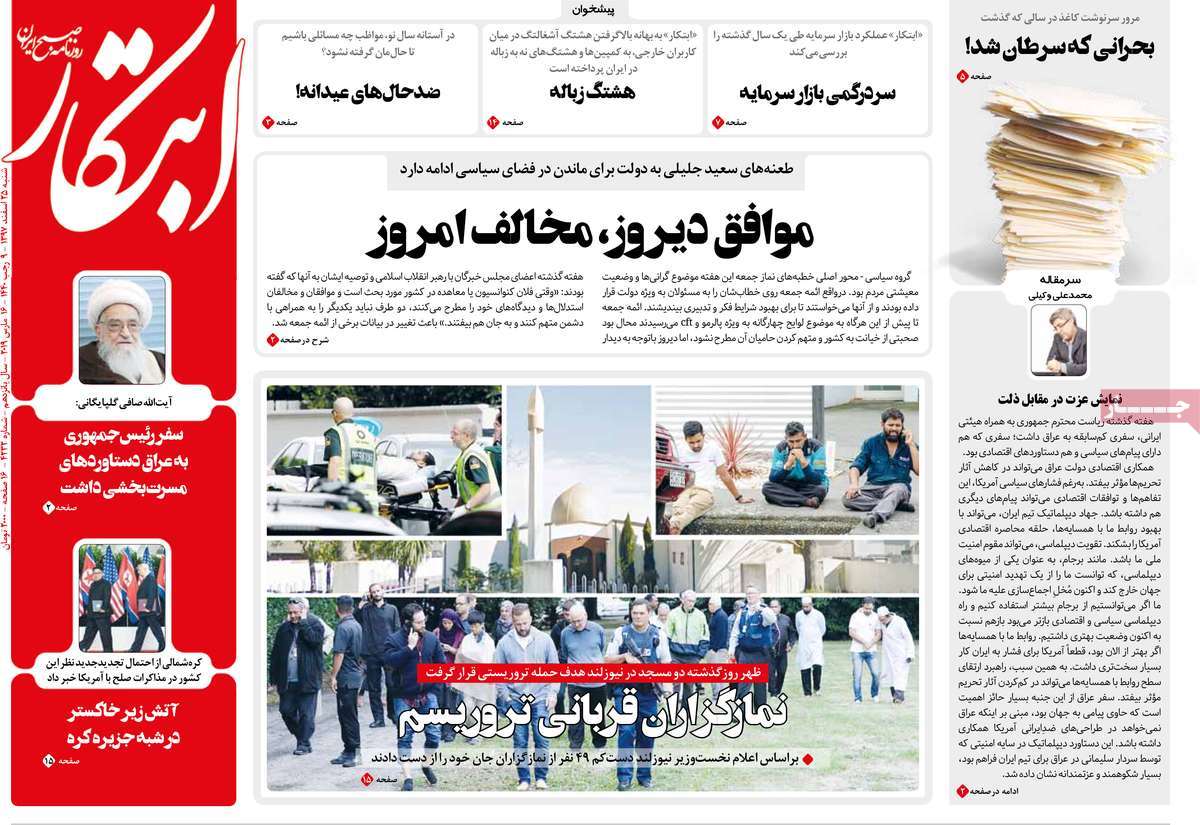 4- Terrorism beyond the Wall [Editorial] 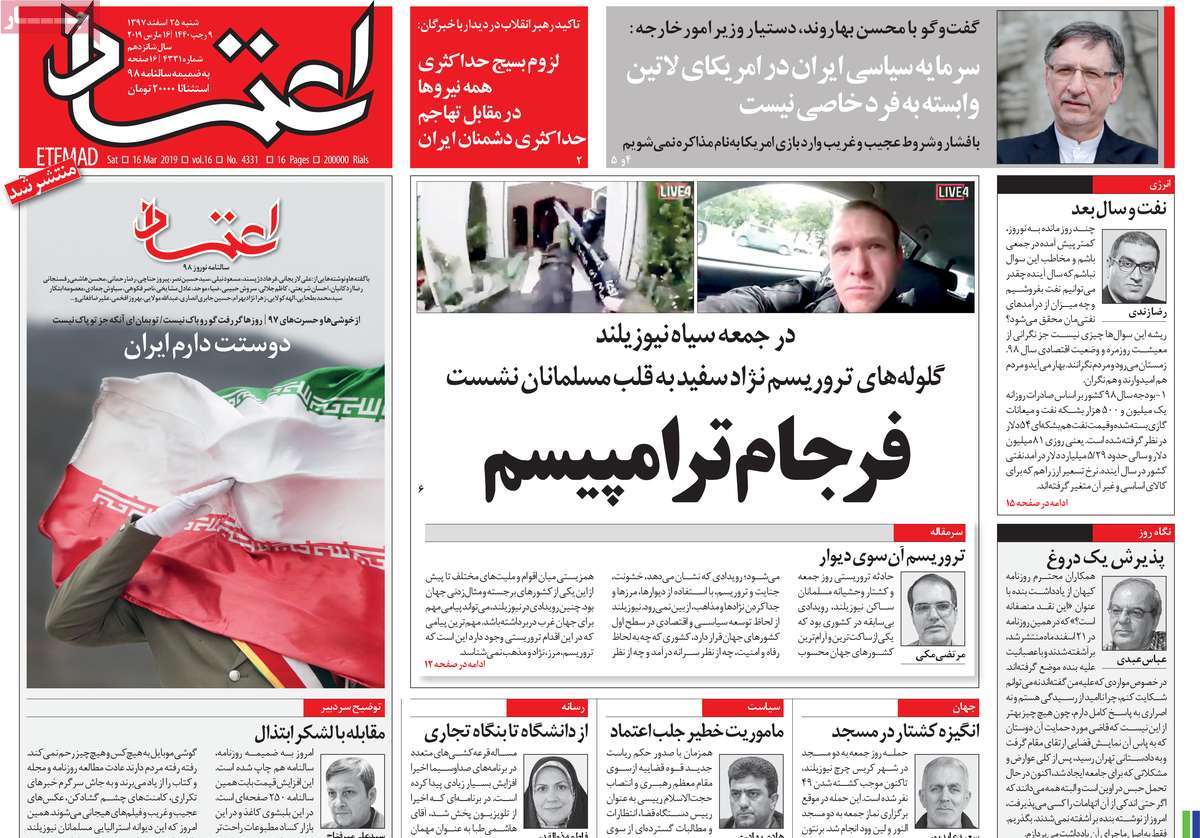 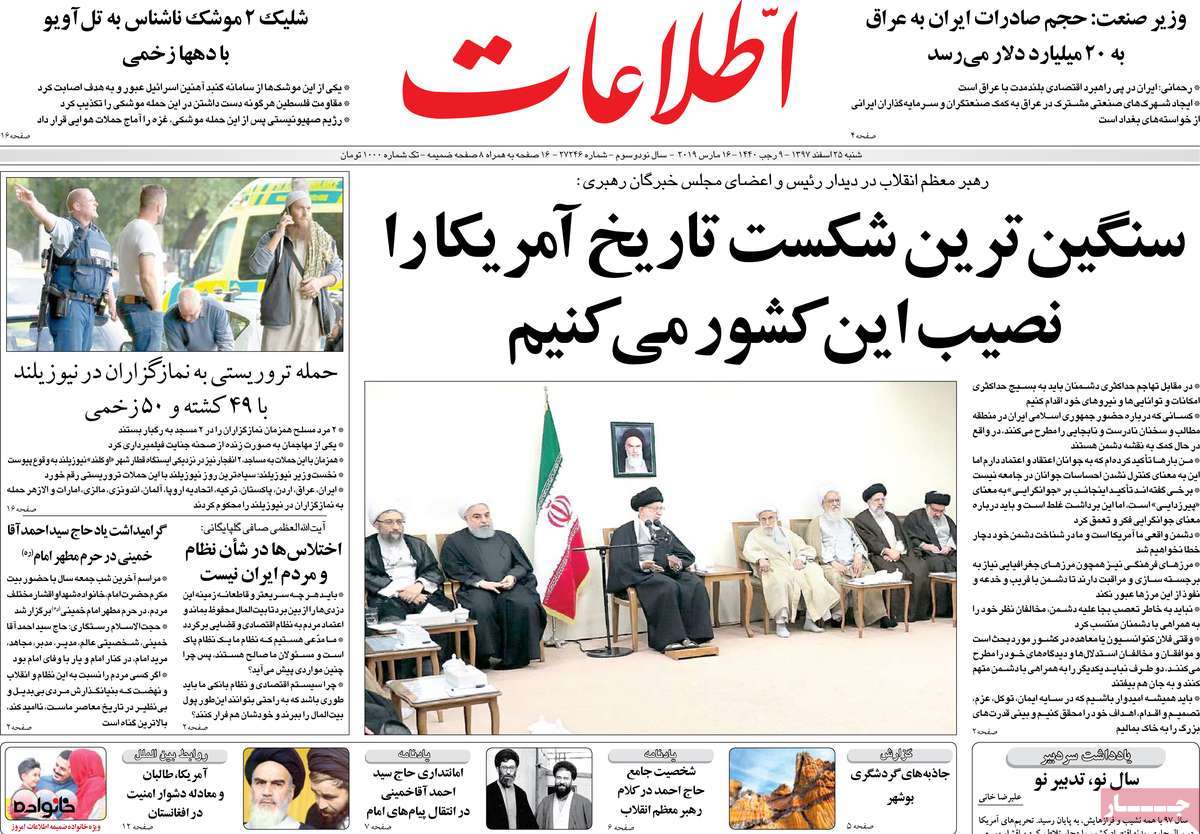 1- They Were Just Muslims 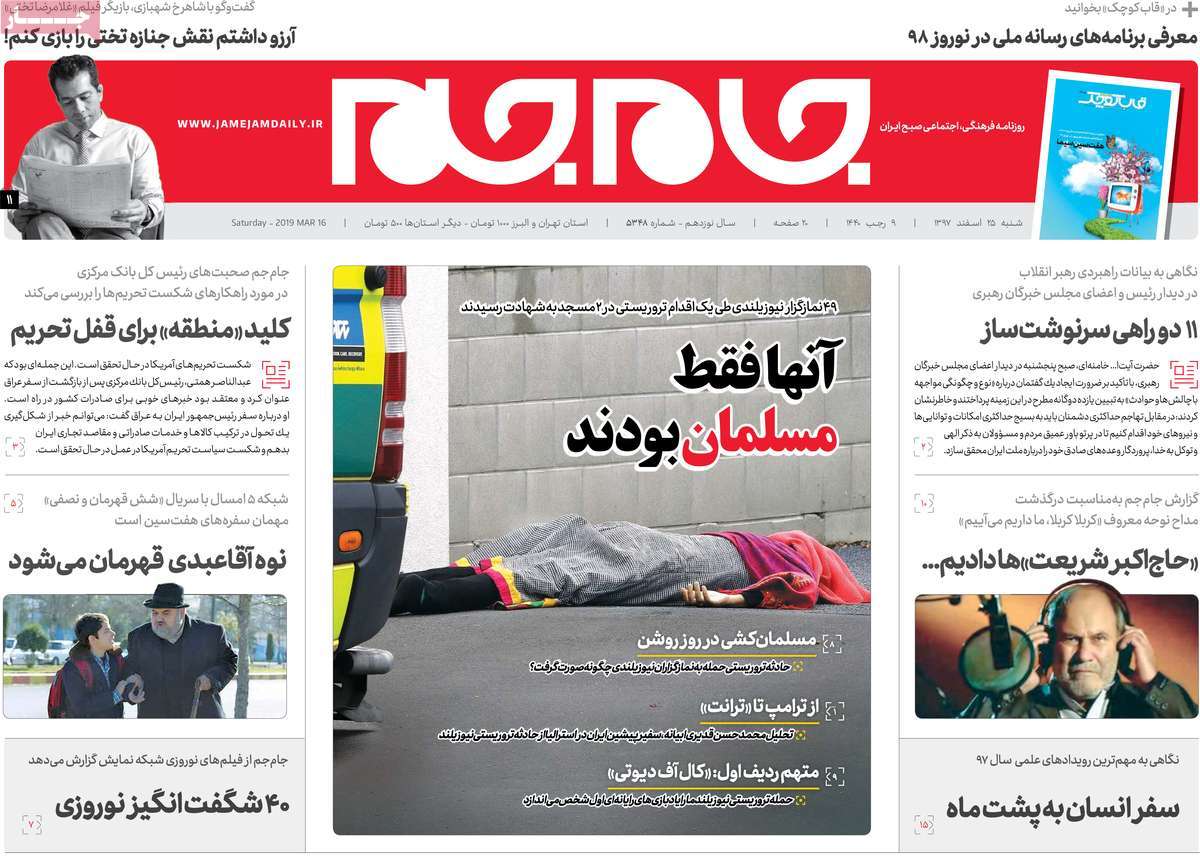 2- Iran Sanctions to Make US Suffer Worst Defeat in Its History: Leader 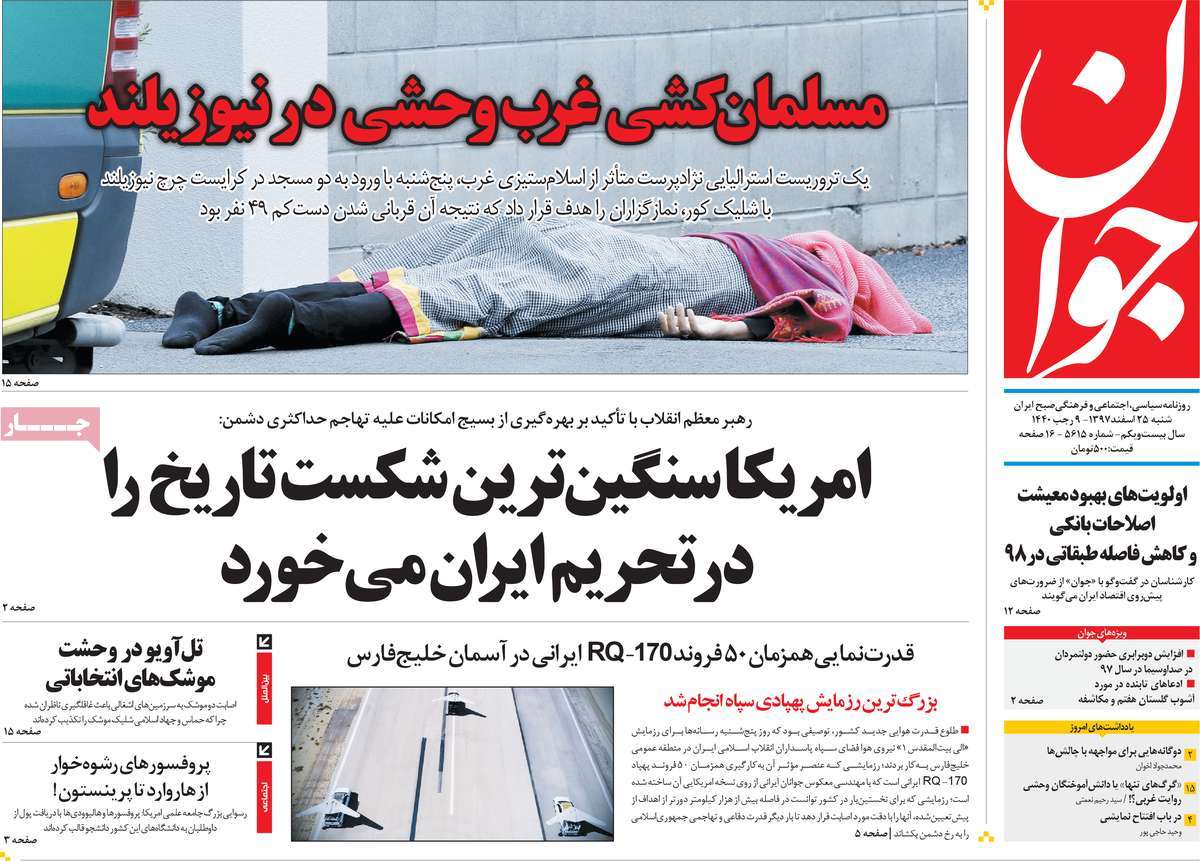 4- US Congress Deals Two Blows to Trump in One Day 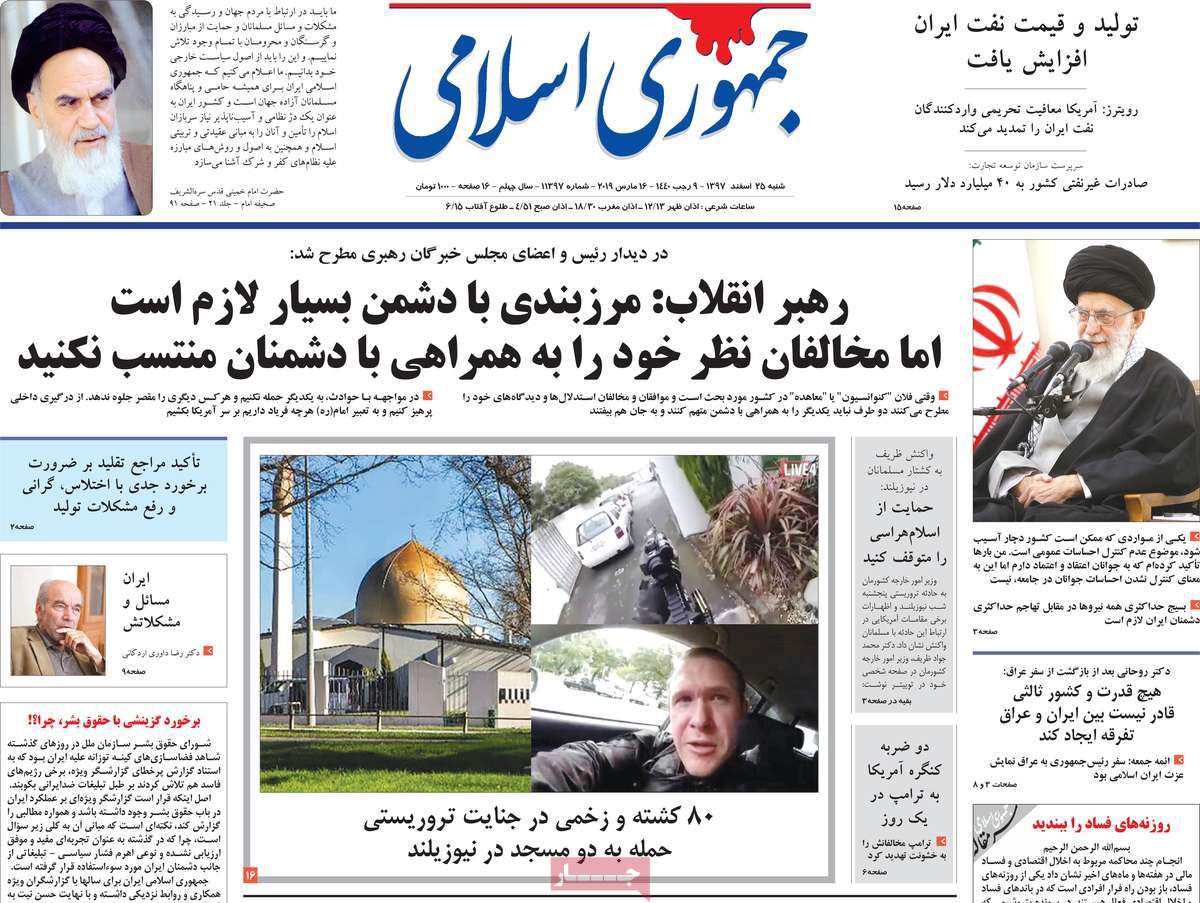 2- Foreign Policy: US Worried about Progress Made in Iran’s Aerospace Industry 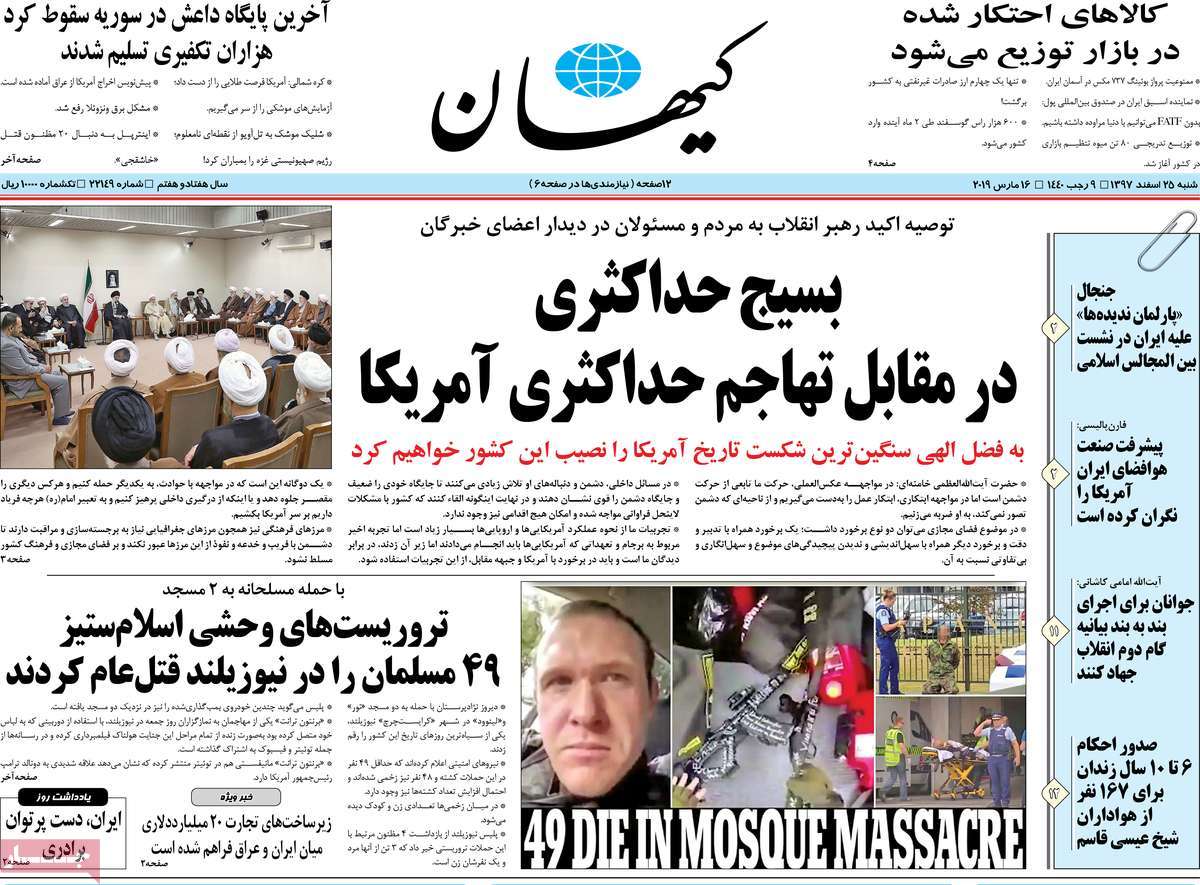 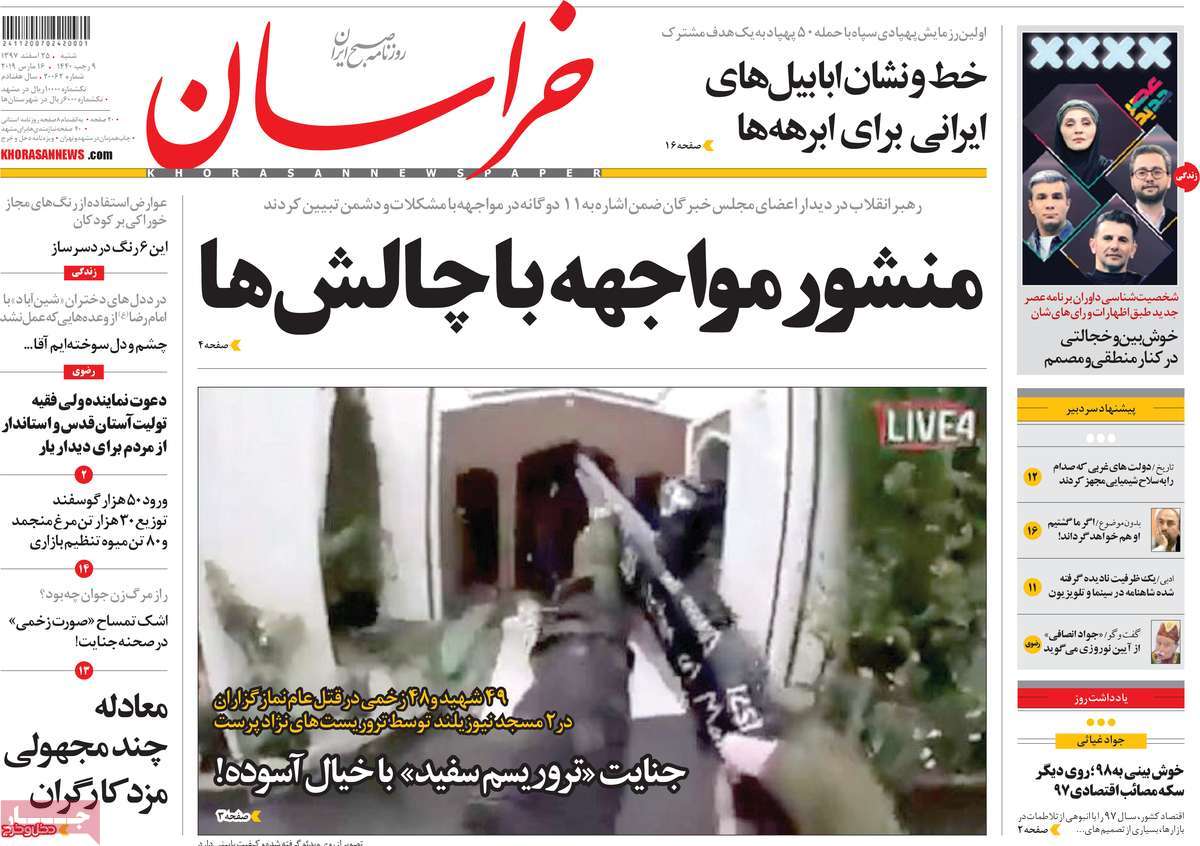 2- Zarif to Netanyahu: If Fight against Terror Is Threat, We’re a Threat 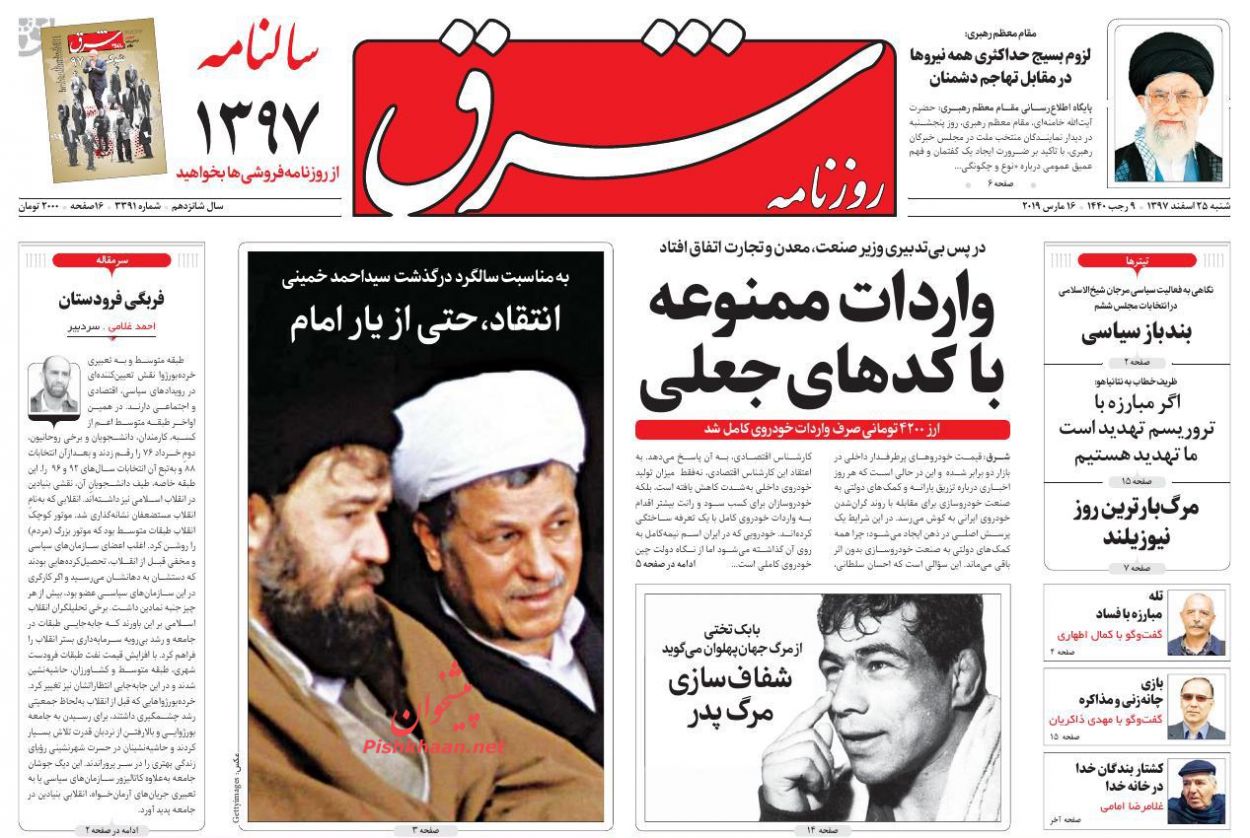 * A Review of Islamophobic Video Games amid Christchurch Massacre 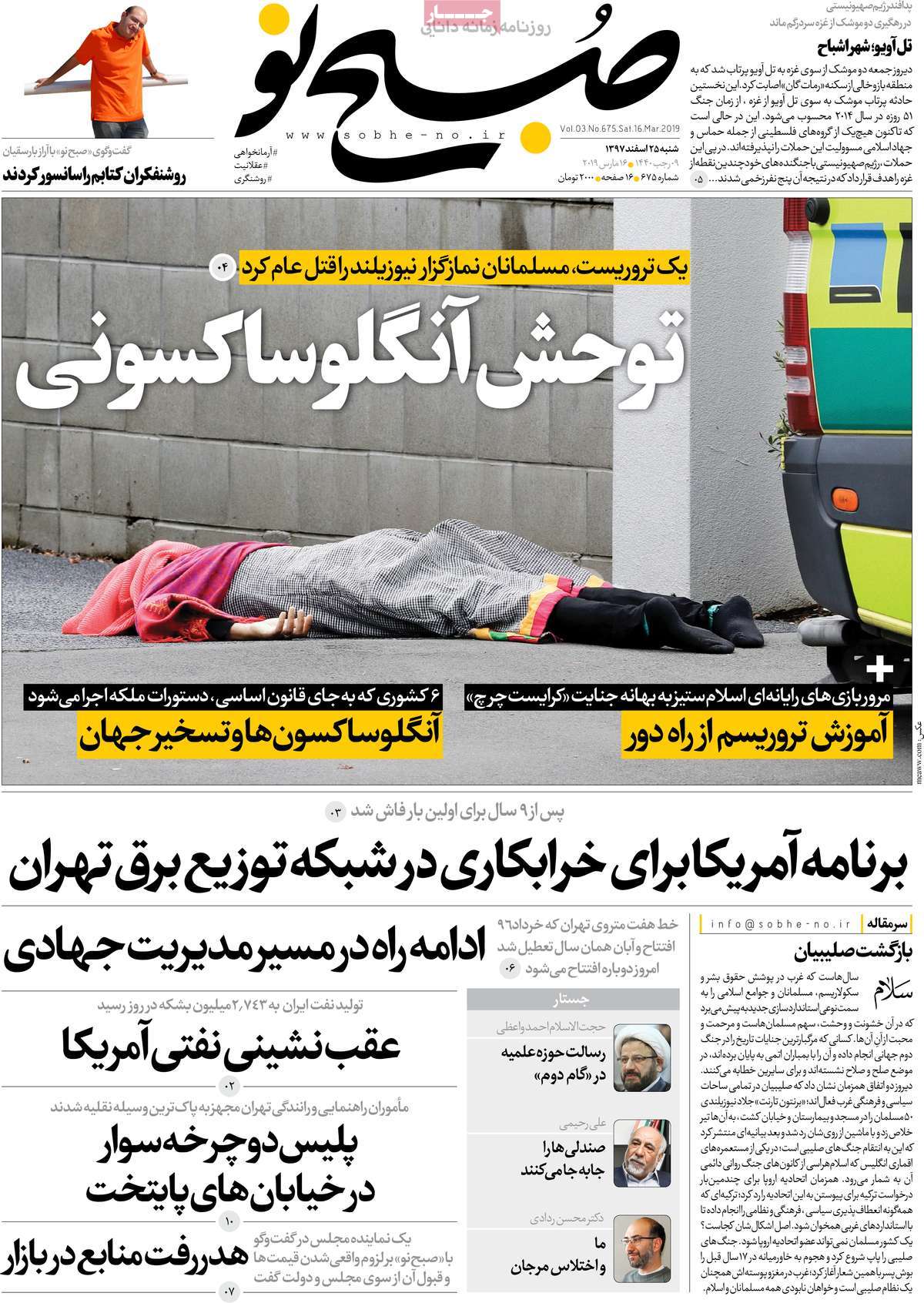