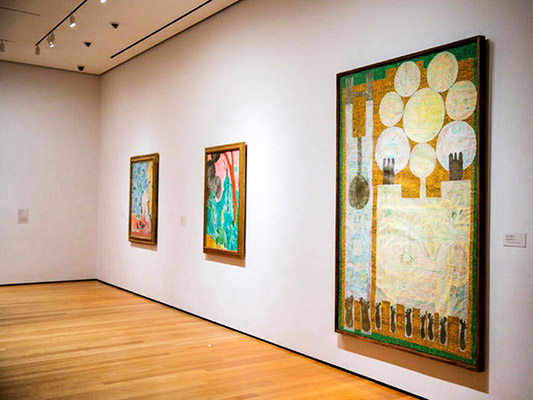 In a move to protest against Trump’s travel ban, New York City’s Museum of Modern Art has rehung part of its permanent collection with works by artists from Iran and two other majority-Muslim nations whose citizens are blocked from entering the US.

In one of the strongest protests yet by a major cultural institution against US President Trump’s executive order on immigration, seven works by artists such as the Los Angeles-based Iranian video artist Tala Madani, the Sudanese painter Ibrahim el-Salahi, and the Iraqi-born architect Zaha Hadid were installed Thursday night in MoMA’s fifth-floor galleries, replacing seven works by Picasso, Matisse and Picabia, among other Western artists.

According to a report by New York Times covered by Honar Online in Farsi, alongside each work is a wall text that plainly states the museum’s intentions: “This work is by an artist from a nation whose citizens are being denied entry into the United States, according to a presidential executive order issued on Jan. 27, 20. This is one of several such artworks from the Museum’s collection installed throughout the fifth-floor galleries to affirm the ideals of welcome and freedom as vital to this Museum as they are to the United States.”

Except for Hadid and el-Salahi, the other artists are all Iranian by birth or heritage. They are Ms. Madani; the sculptor Parviz Tanavoli; the draftsman Charles Hossein Zenderoudi; the photographer Shirana Shahbazi; and the painter Marcos Grigorian. In addition, a large sculpture of aluminium and steel by Siah Armajani, an American artist born in Iran, was placed in the glass-walled lobby courtyard overlooking the garden.

The Museum of Modern Art has also scheduled four screenings later this month of films by directors subject to the travel ban. They include “Al-Yazerli” (1974), an experimental feature by the Iraqi-born German director Kais al-Zubaidi, and “Stars in Broad Daylight” (1988), by Oussama Mohammad, a Syrian filmmaker exiled in Paris.