New Version of Medical Book by Rhazes Found in Austria 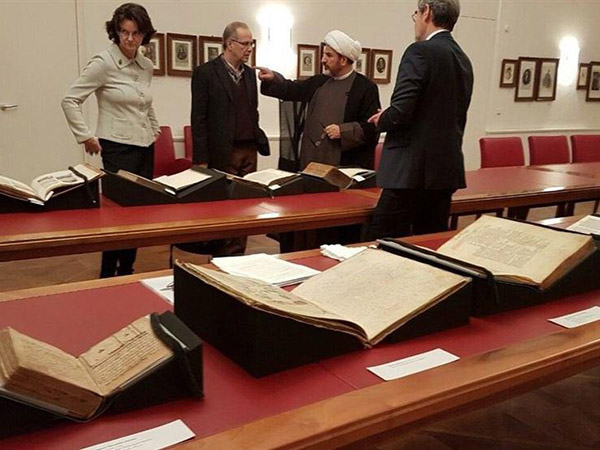 Iranian attaché in Austria announced that a Latin version of Kitab Al-Mansuri, a medical book by Muhammad ibn Zakariya al-Razi, the famous Iranian polymath of Middle Age, has been discovered in the European country’s National Library.

“There were always questions on what happened to Islamic libraries and oriental manuscripts after the fall of Muslims in Andalusia,” said Mohammadreza Vasfi, Iranian cultural attaché in Austria, according to a Farsi report by Tasnim.
“Recently, during a private visit to National Library of Austria, a series of books was shown to me and Mohammad-Mahdi Taskhiri, the head of Centre for Interreligious Dialogue and Civilisation, which contained the Latin versions of a large number of oriental books. Some of them have been translated to Latin in old times and don’t exist anymore in prominent libraries of the world, or are quite rare.”
“Some versions date back to the era of Habsburg Monarchy of Austria, including voluminous series about ancient medicine,” he added.
“There was a detailed, accurate Latin translation of ‘Kitab Al-Mansouri’ by al-Razi, the great Iranian physician. Arabic versions of this book had been identified before, but there was no Latin translation.”
He stressed that the transfer of this book to another culture by translation illustrates its importance at that time.
“Middle Age researchers consider al-Razi as the greatest medieval physician of Iran and the Islamic world. Containing 10 articles, Kitab Al-Mansouri is the most important ancient book on medicine besides ‘Kitab al-Hawi’, also written by al-Razi. It is one of oldest books that revolutionized the science of anatomy.”
Vasfi went on to say that it isn’t clear how this book has arrived in Austria. “Some of those books were given to Austro-Hungarian Empire by the Netherlands Kingdom as gifts in old times. Others were bought from the Ottoman Empire or the merchants of Islamic/Ottoman manuscripts. In any case, Austrian experts believe that the library of Andalusia was the main source of books in ancient times.”
Referring to the dynamic quality of science in Islamic East, and the West’s need to translate such books, he said, “The great heritage of Islamic world shows how advanced it was in science, art, ideology and philosophy. If we could have protected it, today the Islamic world would suffer much less from misapprehensions.”