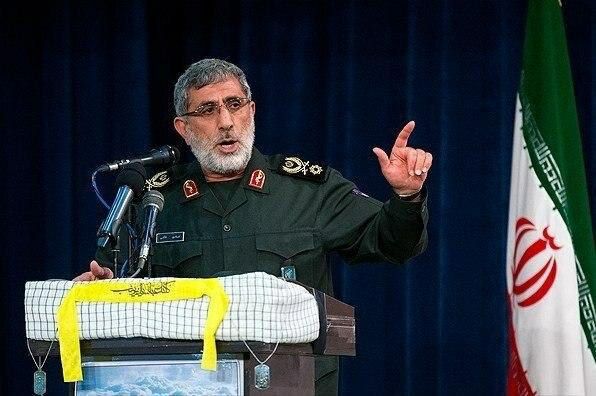 New Commander of the Quds Force of the Islamic Revolution Guards Corps (IRGC) says the massive gatherings held in other countries for the Iranian general Qassem Soleimani indicated their support for resistance against hegemonic powers.

Brigadier General Esmaeil Qa’ani, who was appointed as the new Quds Force Commander following the US’ assassination of General Soleimani, made the remarks in a commemorative ceremony attended by the Leader of Iran’s Islamic Revolution.

He pointed to the massive rallies and ceremonies held by other nations of the world to commemorate the demise of the “international martyr”, and said the huge turnout showed these nations endorse the resistance against the global arrogance.

Qa’ani also praised the ‘faithful’ Iranian and Iraqi people for their million-strong participation in the funeral ceremonies held for Gen. Soleimani in various Iranian and Iraqi cities, and described the turnout as “unbelievable”.

The turnout showed off to the enemies the greatness of an entirely revolutionary country, he noted.

The general expressed hope that the assassination of General Soleimani will irrigate the young trees of Islamic Revolution in the region as well as the old trees of resistance.

He also pointed to the retaliatory missile attacks carried out by the IRGC Aerospace Force against a US base in Iraq early Wednesday, and said it was the first slap on America’s face, the biggest material power in the world.

“God willing, this blow will complement the very important decision made by the Iraqi parliament and the resolve of the regional nations to expel and destroy the inauspicious and dirty presence of the US and world arrogance from the region,” he concluded.