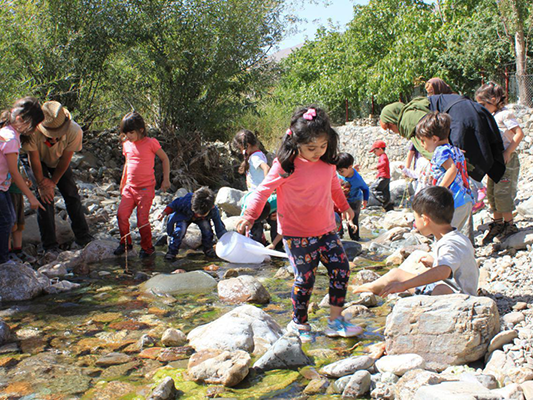 Nature schools are a new initiative giving Iranian students the chance to get away from the restrictions of conventional schools.

The Shahrvand daily newspaper has filed a report on the Fasham Nature School, one of fifty “nature schools” operating in Iran, and expounded on their advantages over conventional schools. The highlights of the report follow:

In nature schools, students’ learning coefficient rises by 25%, and their hyperactivity drops by 40%, says an education official. 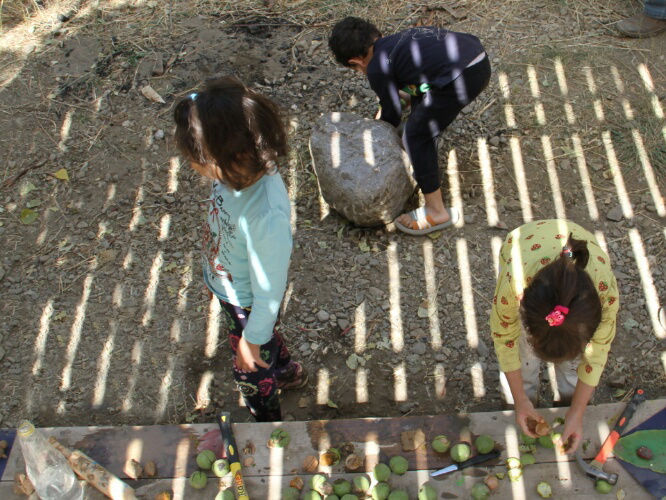 The principal of the Fasham Nature School says students in nature schools have none of the limitations they would face in ordinary schools.

Nature schools are not like conventional schools where little kids would sit at their benches, listen to their teachers and answer their questions. Students spend their time in another way in nature schools. They even wouldn’t force students to learn new methods of planting trees. In nature schools, the bottom line is to “set oneself free.” In such schools, students learn how to establish a relationship with nature, and that’s how they learn. This simple sentence is so difficult that not everyone can get along with it. For example, one of Iran’s 50 nature schools is located in Garmabdar in Fasham resort on the suburbs of the Iranian capital, Tehran. There, kids will not be told off if they run around trees, jump over pieces of rock and put their arms in soil elbow-deep. No one will tell them “Stop that!”

The school is located next to a river; here, a school means a yard full of trees, two plump rabbits, three dogs, a few lambs, hens, roosters and a field covered with stones, soil and grass. If interested, kids can take the eggs laid by the hens and fry them in a pan, or they can run after butterflies and watch mulberries on trees. In nature schools, the principle is to set oneself free. 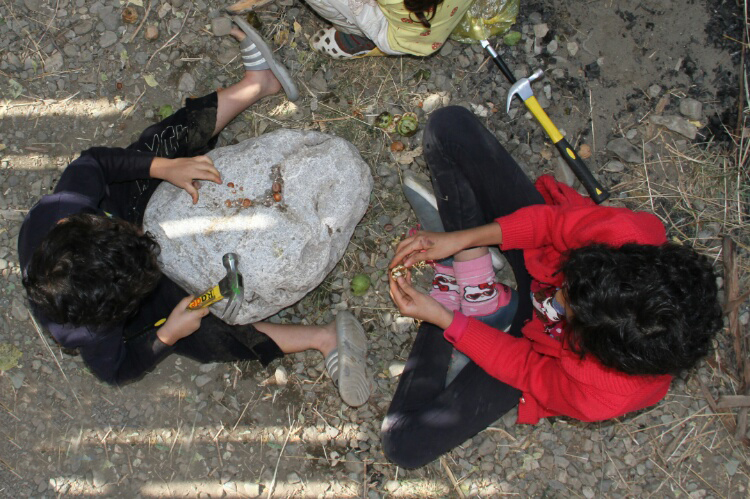 Arash Kermanshahi, the principal of the school, has been an environmental activist for more than 20 years now. With the cooperation of 20 facilitators, he is staying at the school and spends his time, day and night, with kids between 3 and 12 years of age. He believes children should play until they are 12 years old. He says kids’ relationship with nature shapes their characters, prompts them to protect the environment in the future and helps them use their skills in different fields.

Authorities at the school speak of Abdulhossein Vahabzadeh, the founding father of nature schools in Iran.

“3-to-12-year-old children do not need direct education. They will get the chance to get an education later on. Direct education stifles creativity and keeps creative skills in children from developing,” the school principal quotes Vahabzadeh as saying. Nature schools were first introduced in Europe. Then Vahabzadeh, a renowned environmental activist, brought the idea to Iran.

In summer 2014, the first nature school was inaugurated in Mashhad thanks to his initiative, and it was decided that more nature schools be established across Iran.

Iran is the first country in the Middle East to have started building nature schools. The Iranian Department of the Environment offers good loans to those who build nature schools.

Conventional Schools: No Trees & So Much Competition 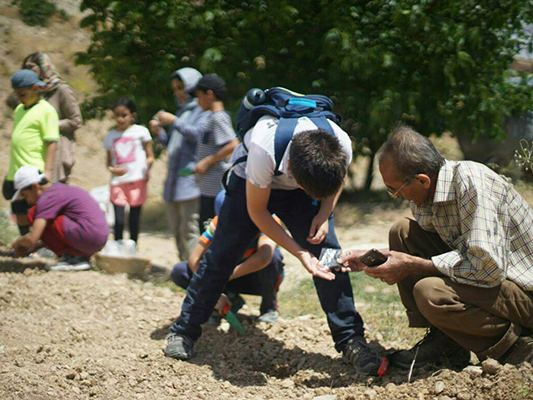 Leila Parhizgar, a PhD candidate majoring in The Environment, has come to the school with her little daughter.

“There are not enough green spaces and trees in schools. The Education Ministry has only created a competitive atmosphere for children. The kids are always anxious, waiting to take part in competitions, and win prizes. That’s why they don’t enjoy their childhood. Nature schools are a way to establish a relationship with humans’ basic foundation, which is nature. Through violence and giving orders, one cannot expect children to become useful citizens in the future,” she says.

What do children exactly do in nature schools? According to Kermanshahi, it is necessary that children be left alone and allowed to play until they are 12 years old, because their job is “playing” only.

“Taking kids to class and teaching them certain things will separate them from playing and creativity. This is wrong. This age period is a time when children are curious and get to know the environment around them, themselves, their capabilities and their small society. This comes as all these basic necessities are restricted in conventional schools.”

The principal of the nature school believes that these environment-friendly schools sound the death knell to all limitations which exist in conventional schools, limitations such as “peers must study together, you need to get permission before talking, if you act otherwise you will be punished.”

“This age period is the time when children get to know social relationships, but our schools have turned into barracks. One should know that not all children should be educated in the same way. It has been years that the world has come to this conclusion: Children should play to become creative and learn all social and individual skills.” 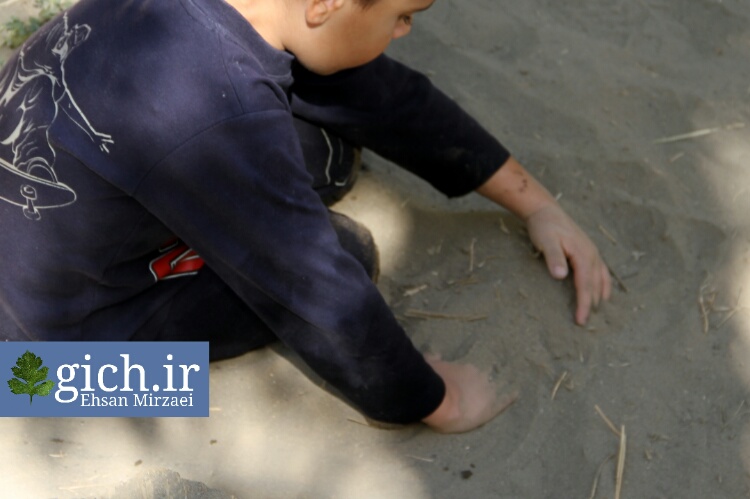 No special classes are held in nature schools. The only events might be get-togethers for cooking jam or touching the leaves of different plants. Children are free in this environment. Everything is free as long as the kids themselves or others are not facing serious harm. There is only one important law for children here: Don’t hurt yourself, others and nature.

Those working here let children be free. They have no role in children’s playing. They just help if the kids ask for it. For example they offer consultations if the children need a solution. We adults are among the key environmental factors here. The history of mankind indicates that our ancestors did the same. But now, we send kids as young as 3 to different classes to learn different things, e.g. to play the piano. However, these things can be learned after the age of 12 or throughout one’s life, too. 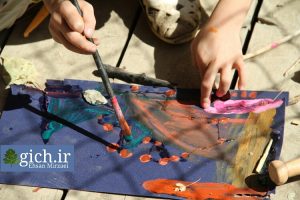 Each nature school should have at least 5 facilitators, though a group of 20 experts are cooperating in this school. The school principal says the team comprises 30 people, but 20 of them include experts such as sociologists, biologists, etc., who are certified facilitators. The most important thing they learn is to not manage children’s games.

“They should be trained to feel comfortable with the concept that children should be left alone,” says Kermanshahi.

Six days are for kids and Fridays are for families. Of course, this law does not apply to nature schools because not all fathers and mothers can leave children alone the way facilitators expect them to. But this is the decision the principal has made for the school.

As the principal explains, a more advanced training course has been envisaged to learn how to keep track of the progress that children make after they enter nature schools.