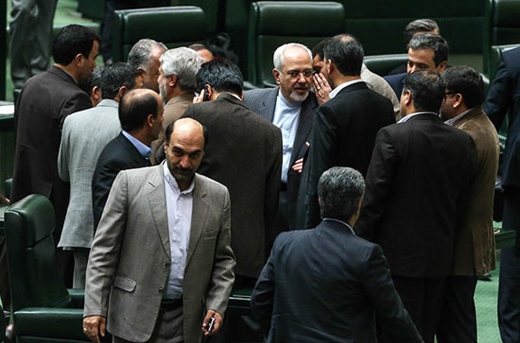 The official news agency rallies behind the moderate approach of the president and his diplomats in interaction with the rest of the world.

In an analysis on February 2, the Islamic Republic News Agency lashed out at those who oppose a nuclear deal with the world powers and said moderation is an irreversible path Iranians have stepped on. The following is a partial translation of the analytical article that underlines the electoral promise of candidate Rouhani to interact with the rest of the world has been fulfilled:

In April 2013, before Hassan Rouhani was elected president, he said, “The world of diplomacy does not simply provide you with a platform to make your positions known; rather you need to have constructive interaction with the rest of the world.” This sentence represents the approach of his moderate government to foreign policy. When Rouhani’s predecessor was in office, nuclear talks were held just for the sake of holding talks.

Back then when it was still possible to use the talks to prevent Iran’s nuclear case from being referred to the UN Security Council, our officials were content with reading out statements. National interests and security are a fundamental principle, particularly when it comes to foreign policy. They are among the top priorities of every country and one of the agencies which promote these interests on a regional and global level is the diplomacy apparatus.

The following statement by Hassan Rouhani may shed light on the significance of diplomacy and efficacy of negotiations for some: “Following the Khobar Towers bombing [in Saudi Arabia] the country came close to being attacked by the enemy in 1997. On orders of the leaders of the establishment I traveled to Saudi Arabia.

“My evening talks with Saudi officials continued well into the next morning. At 5 a.m. the Saudi representative Prince Nayef said he would sign any deal drafted by the Iranian representative. That was exactly what happened. The talks which had gotten off to a tough start with little hopes of being conclusive, paved the way for a deal. That was simply the result of reasoning, logic and the art of negotiating.”

In other words, no two countries would remain hostile against each other forever. When candidate Rouhani hit the campaign trail, he openly talked about the transparency of Iran’s stance on the foreign policy front and said those dealing with Iran know that continued disagreements wouldn’t serve their interests. Iran is a powerful great nation, and if we set aside uncalculated, illogical deeds, we can talk with all countries and reach a deal.

Another issue that can be mentioned about post-revolution Iran in which the Islamic Republic Iran has maintained logic, reasoning and wisdom and has followed its foreign policy based on dignity, expediency and sagacity is its relations with Saddam.

Iran never forgot the crimes Saddam’s Baathist Iraq committed against its people. It put up resistance for eight years. Finally, on August 14, 1990 Iraqi President Saddam Hussein sent a letter to the then Iranian President Akbar Hashemi Rafsanjani to accept all the terms Iran had in mind for peace between the two countries. In order to secure peace with the Islamic Republic of Iran, Saddam accepted the same deal he had once dismissed to wage war against Iran.

Another historical point worth mentioning here is that after Iranian Hajj pilgrims were subjected to a bloody crackdown in 1987, the late Imam released a message which said, “We may someday forget the misbehavior of Saddam, but we’ll never forgive Al-Saud family for what it did.” The two countries maintained relations afterward and Iranian pilgrims continued to visit the country.

Why is it that some are making ballyhoo now, but failed to find fault in the past? Why are some tying their survival to opposition and noise-making? To make fuss, they are using speeches, cartoons and news stories reported by sources whose animosity is an established fact.

Some want to entangle a government that has been given a strong mandate by a majority of people to handle a great deal of problems and revive an economy crippled by inflation, recession and sanctions. A government that ran on a platform of moderation. They want to distract the government so that it could not put the Islamic Republic on track to securing the goals stipulated in the Outlook Plan.

Why is it that some regard low-level nuclear talks as excellent, but fail to pay attention to tough, complicated talks currently underway? Why are they making fuss about issues such as the walk in Geneva between Zarif and Kerry to place pressure on those who are trying on the diplomatic front to maximally serve our national interests?

Doesn’t this amount to contribution to efforts by those who seek to overshadow the talks and slap more sanctions or to the efforts of countries which are using every diplomatic and economic tool available to foil the talks?

There are some individuals among those critical of the diplomatic apparatus who have never been abroad. But all of a sudden they are worried about lack of respect for the Iranian passport.

One day they capitalized on the secret wording of the Geneva Deal. They penned numerous articles that suggested the deal amounted to concession. “Otherwise, there was no reason to keep it under wraps,” they argued.

In this regard, Foreign Minister Zarif has said, “Today no one is talking about the enrichment itself. The extent of enrichment is under discussion. Today our march toward industrial enrichment is a proven fact and no one doubts it. That is thanks to the resistance of the public, and the endeavors of nuclear scientists and their spilled blood. May their souls rest in peace.”

Another achievement of the nuclear talks was the isolation of the Zionist regime. This is how the Iranian top diplomat has put it. “In the past Netanyahu used a drawing to mobilize the world against Iran at the United Nations. Whenever he visited Washington he secured one new anti-Iran resolution in the US Congress. That trend has stopped for two years now. In short, we take pride in the fact that the Zionist regime has failed to secure its ugly goals against Iran, Islam and the entire region. We played a small role in this victory.”

Thanks to the same solid logic which is used in nuclear talks by our negotiators, when Zarif appeared on parliament floor to answer questions, deputies rejected the stance of a fellow MP who insisted on his opposition to the foreign minister. So the chamber which was presided over by Mohammad Reza Bahonar voted in favor of the top diplomat.

The vote proved that those who are critical of extensive efforts by the government to interact with the rest of the world are a minority. And through the votes the majority of Iranians cast in presidential elections in 2013 they showed that they want moderation, interaction and economic progress.

That vote also proved that the Iranians do not want sanctimoniousness. As President Rouhani told a Seventh International Farabi Festival the other day, “Sloganeering does not settle our problems.” People don’t want to hear slogans. They don’t want extremism. It is the awakening age and the path the Iranian nation has chosen is not reversible, whether or not a bunch of hardliners accept it.

As the Supreme Leader in a meeting with state officials on July 6, 2014 said, “We trust our nuclear negotiators and we are certain they won’t allow others to harm Iran’s interests.”