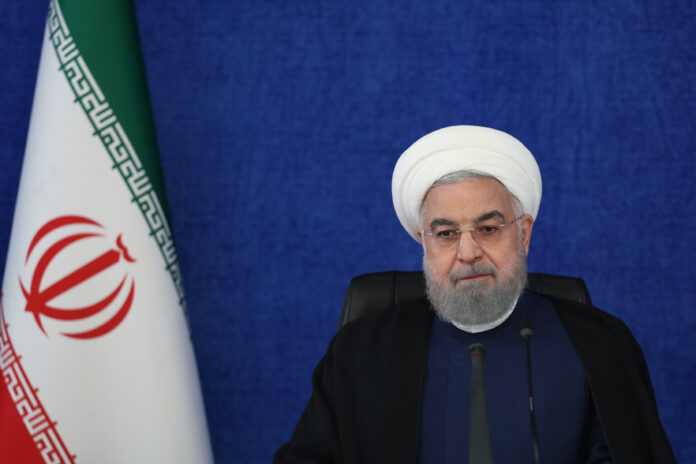 Iran’s president has condemned a French satirical magazine’s move to reprint an offensive cartoon about Prophet Muhammed (PBUH), saying that Muslims must be careful to protect their values under the current “critical” situation.

Hassan Rouhani said on Thursday that the world, especially the Muslim world, is in a special and critical situation now.

“On the one hand, the Zionists are conspiring in the region, and unfortunately, they are deceiving some Muslim and Arab countries, which should be sensitive to the Palestinian issue,” Rouhani said.

On the other hand, he added, their flunkies are publishing insulting cartoons in certain magazines.

“All this means that we are in a critical situation in the world and we must defend Iran, the interests of Islam and our values,” noted Rouhani.

The situation in the region is very critical and all must be watchful, President Rouhani said in a videoconference address to an inauguration ceremony to launch mega projects in Free zones of Kish, Aras, Qeshm, Sarakhs, etc., said.

An 80-hectare greenhouse in West Azarbaijan’s Aras Free Zone, a home appliance factory in Payam Free Zone in Alborz Province, some factories in Shiraz Free Zone, and a tile production facility in Sarakhs were among the main projects launched by Rouhani via videoconference.

He also noted the fact that Iran can launch projects worth 15,000 billion Tomans in a week, shows the country is flourishing and active.

“It also means that the US is defeated. It means that we can tread on the path of glory as well as the progress and development of the country,” underscored Rouhani.

The President said Iran, with its huge resources, diverse climate and easy conditions for investment, is an attractive place for investors, and all governors and managers of free and special zones are ready for domestic and foreign investment.