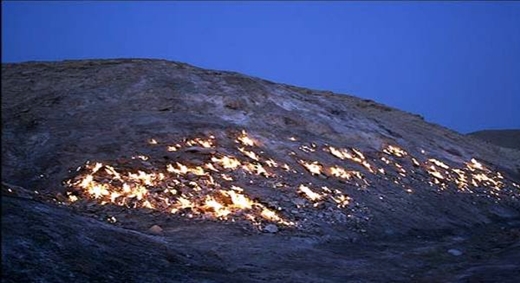 Tashkooh, a burning mountain in southern Iran, absorbs a large number of tourists who rush to the area to see its permanent flames rage on and on and on.

Tashkooh (Firing Mountain) is a mountain near the Mamatin village, between Ramhormoz and Izeh in Khuzestan province, whose flames never die down.

Also known as Atashkooh, the mountain is always burning due to the sulfur vapors rising from the porous layers of its surface and flames fanned by sublimation and nebulization.

The burning fire is a picturesque scene at night when tourists huddle together around the mountain whose constant emission of gases does not allow the ignition of another fire nearby.

The following are the photos the Young Journalists Club (YJC) has placed online of the amazing mountain: