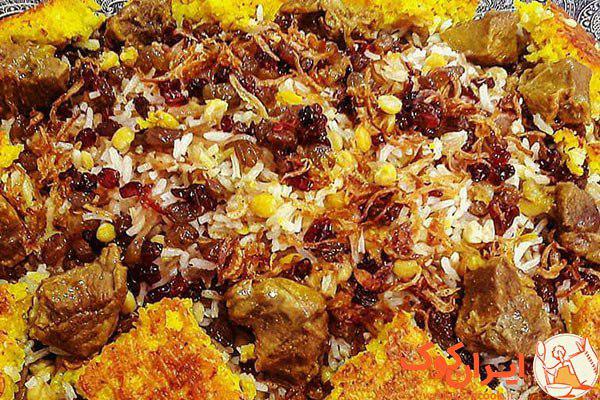 Maani-Pilaf is a tasty and colourful local Iranian food made with several ingredients, including rice and meat.

Maani-Pilaf is one of the local foods of the city of Damghan in the north-central Iranian province of Semnan. It is a very delicious, colourful and mouth-watering food. Noodles, barberries and sultanas are used in cooking Maani-Pilaf. The ingredients usually include beef, or sometimes sautéed chicken with onions.

Brewed saffron: a quarter of a cupful

For the Scorched Rice:

Butter to grease the bottom of the dish

Shred the onion and fry it. When the onion shreds begin to turn gold, add some turmeric and continue frying until it gets crispy and dark gold. Then add chopped meat and put the mixture on mild flame until its colour changes and is no longer pink. Then add some salt, pepper and turmeric. After one or two minutes, add a cupful of water and put the lid on the pan, and wait for the meat to be cooked through.

With two cupfuls of water and some salt, cook the split peas which you have already kept in water for at least two hours and changed the water several times.

Fill a casserole dish two-thirds full of water and let it boil. Then add washed riced in the boiling water. Add the noodle as well as the cooked and sieved split peas 3-4 minutes before the rice is cooked through. Sieve the ingredients after they remain on the flame for another 2-3 minutes.

Put some oil on the bottom of the dish (oil keeps butter from burning). The ingredients for scorched rice, namely a cupful of rice, two spoonfuls of Greek yogurt, one egg and two spoonfuls of brewed saffron, should be mixed with some salt and pepper and pressed on the bottom of the dish (The mixture should not be too hard or too soft). Afterwards, put the mixed rice on the ingredients and leave the mixture to cook.