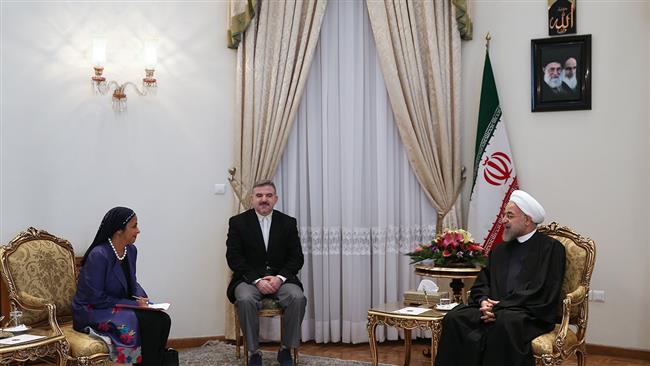 We hope that coordinated efforts by oil exporters to bring balance back to the oil market will continue, said President Rouhani.

Iranian President Hassan Rouhani says the current falling oil prices will be harmful to producers and will threaten the stability of global market.

“Today’s oil price is to the detriment of producers and the world market stability. We hope that coordinated efforts by oil exporters to bring balance back to the oil market would continue,” Rouhani said in a meeting with Venezuelan Foreign Minister Delcy Rodriguez in Tehran on Monday.

He added that “stability and balance” in the oil market will be beneficial to all, expressing hope that Venezuela’s efforts to restore balance to global oil market would lead to balance in the price of oil.

Iran and Venezuela are member states in the Organization of the Petroleum Exporting Countries (OPEC).

Oil prices have nearly halved since the summer of 2014, and currently slightly above 60 dollars per barrel. The fall in prices is blamed on global supply glut and weak demand.

If oil prices remain at current levels, the profits for investors would shrink by up to USD 1,000 billion in 2015. In this case, they would have far less capital for new projects and would be more cautious about their investments.

The Iranian president further said Tehran is keen to improve ties with Caracas, particularly in the economic sector.

“The Iranian nation and government’s will is [based on] expansion of friendly relations and cooperation with Venezuela in all fields,” Rouhani stated.

He emphasized that the era of big powers’ interference in internal affairs of countries is coming to a close and said Iran regards as “unacceptable” the meddling of some powers in domestic affairs of independent countries including Venezuela.

The Venezuelan foreign minister, for her part, underlined the importance of bolstering Tehran-Caracas ties.

Tehran is a strategic partner for Caracas and the Venezuelan government and nation would always stand by the Iranian people, Rodriguez said.