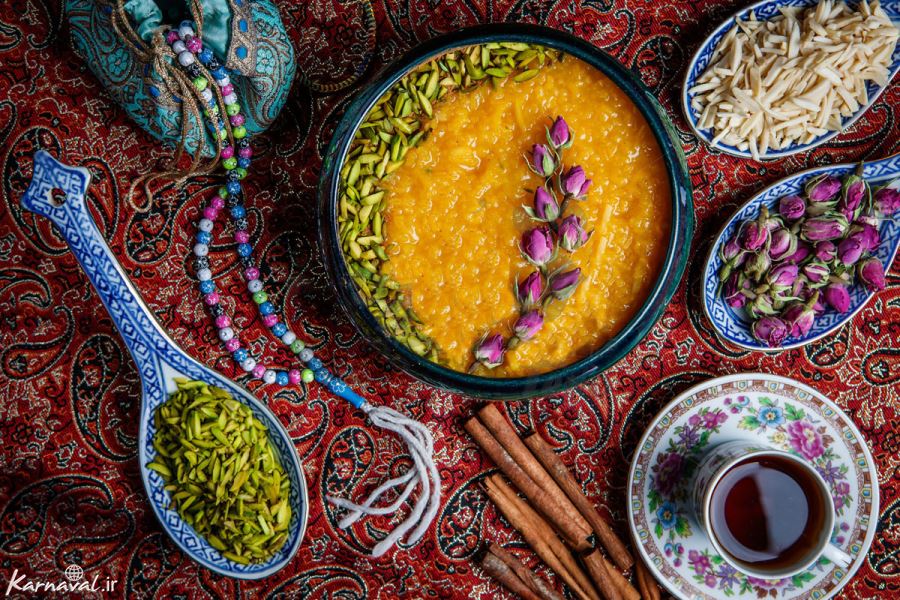 In a different look at the Persian cuisine, an Iranian-American woman named Pontia Fallahi has introduced ten Iranian desserts that could be a different experience for those who travel to the country.

The food of each country is part of that country’s individualities and is known as one of the factors introducing its culture. Some of them are so interesting and noticeable that can even be considered as one of the attractions in the world today. The Iranian food culture is of great diversity, and at every point a new taste can be discovered and enjoyed.

Pontia Fallahi, the Iranian-American woman, has a different look at this culture, and in an article introduces ten Iranian desserts that could be a different experience for those who travel to this land.

According to a Farsi report by Karnaval.ir, Pontia was born and lived in America and has the experience of living in three other countries. In her article, she has described ten local desserts that everyone should try them.

She says Chelow kabab [the national dish of Iran, consisting of cooked rice and one of the many varieties of Iranian kebab] is one of the most well-known Iranian cuisines and almost everyone knows it, but does anyone pay attention to desserts in this country?

“Iranians have a friendly culture and use every opportunity to get together and drink tea. The interest in the tea has made the Iranians attracted to sweet tastes. These tastes are a different experience that few people pay attention to. They have three inseparable elements: saffron, rose water and cardamom.

Zulbia is the name of a sweet that is poured into oil by a funnel and deep-fried in pretzel or circular shapes. Then, it is soaked in rosewater and saffron syrup to get a different taste. 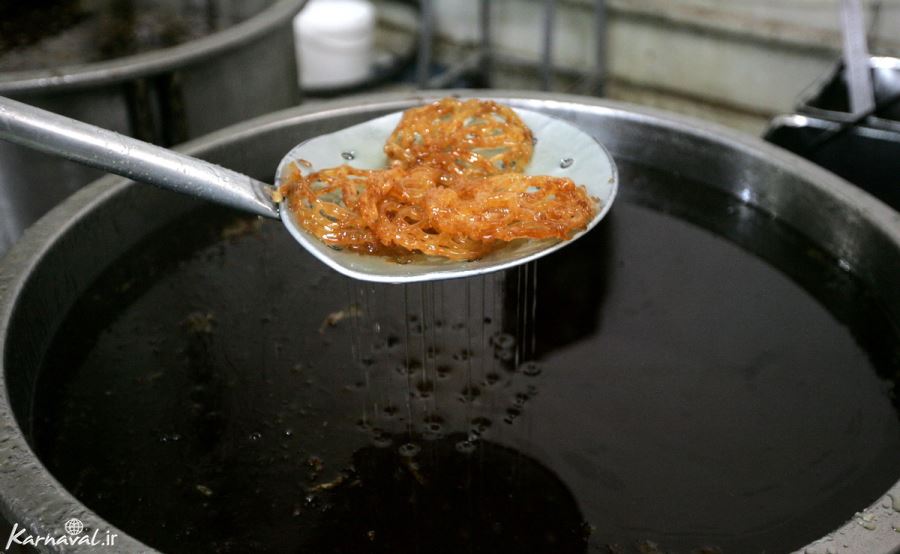 Bamiyeh is also the name of another sweet that is usually served together with Zulbia and is very similar to Chorru (a Spanish fried-dough pastry). Bamiyeh is also dipped in sugar syrup.

These two sweets have many fans in the holy month of Ramadan because after a day of fasting, it provides the body with the sugar it needs. 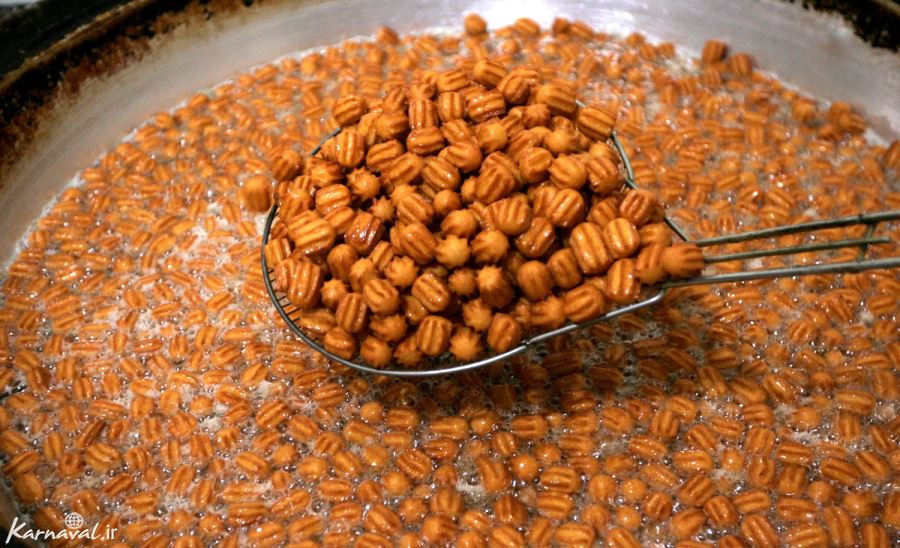 South of Iran and the Persian Gulf islands display a kind of different culture in Iran that is even touchable in their cuisine. In these regions of Iran, people fill in soft dates with walnuts, then put them in a blend of fried flour, saffron, cardamom, and cinnamon to make a delicious dessert called Ranginak. This delicious dessert can make everyone crazy with its appearance, and its taste can put a spell on you. 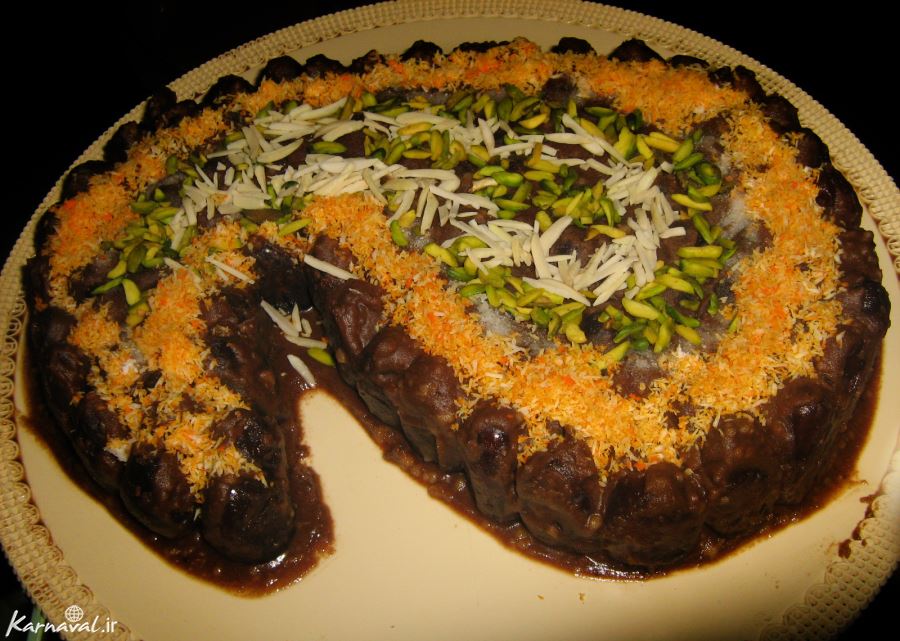 With the first look at Faloodeh, you may ask yourself: Who would eat noodles as desserts? But if you taste these noodles that are dipped in the rosewater syrup, for sure you will not trust your eyes when choosing something to eat. There are many choices ahead; you can have this dessert with lemon juice or enjoy it with sour cherries and other syrups. Faloodeh is the best choice in the hot summer days and you can find the best ones in the city of Shiraz. 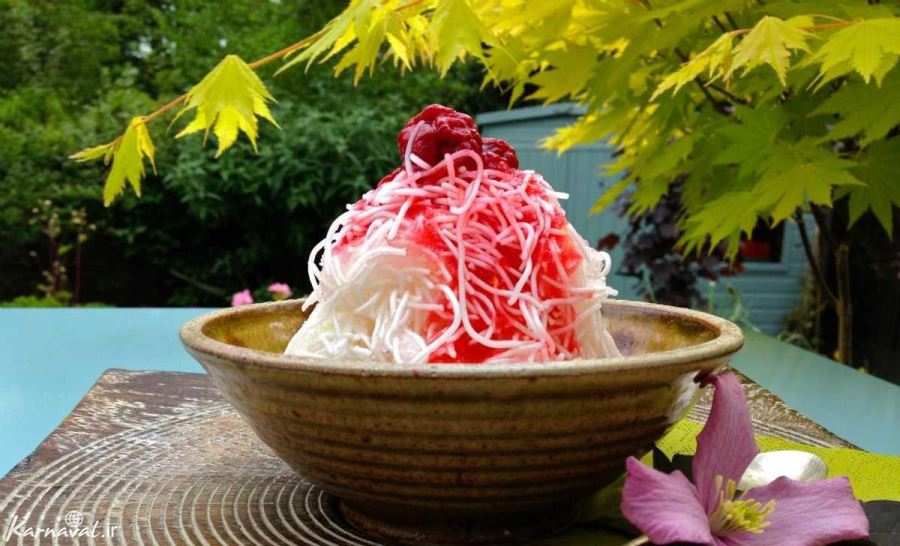 In the 1950s, a person named Akbar Mashhadi introduced a delicious ice cream that has become the most famous ice cream in Iran today. This ice cream is also known as the traditional ice cream and has many fans. The combination of vanilla ice cream, saffron with rose water and pistachios can be an exciting experience for you, but not as much as when frozen cream pieces surprise you and make you feel good. This ice cream is served both in a cup and in a special Iranian form of ice cream sandwiches. 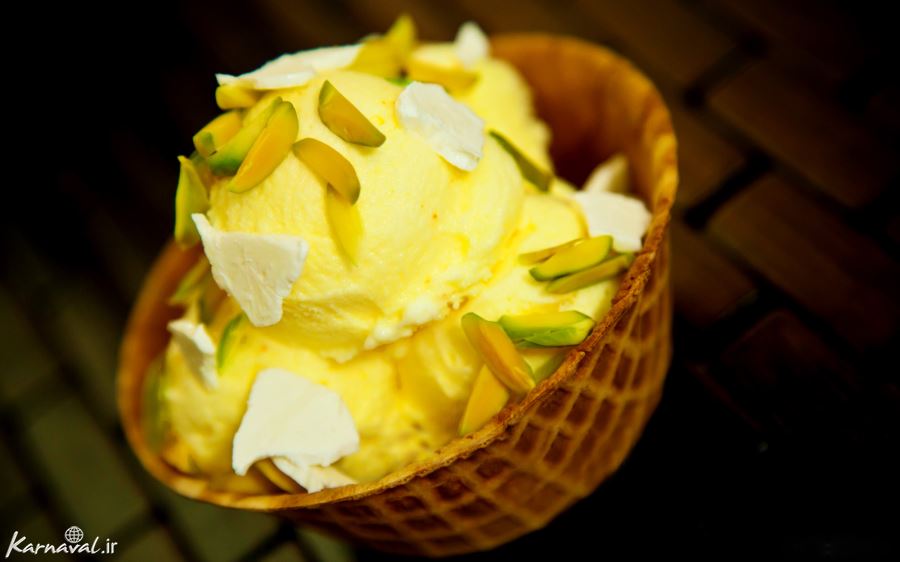 Now it’s time to introduce the special Iranian pudding which is made with rice. The high-quality Iranian saffron also gives it an excellent yellow colour and aroma. Cinnamon is also an ingredient, but is used exclusively for dressing. In the religious ceremonies and during the holy month of Ramadan, Shole-Zard is served among Muslim communities free of charge. 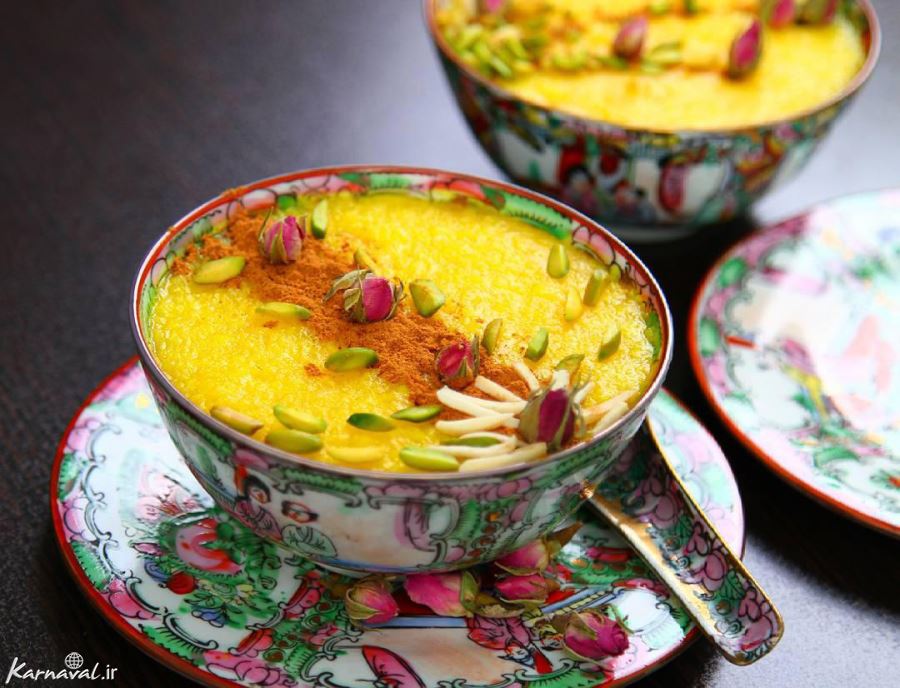 Yazd in central Iran is one of the cities that are famous for delicious sweets. In this city you can try different types of Baklava including the Greek and Turkish ones. You can also taste Qottab [almond-filled deep-fried Iranian cuisine pastry] Loz-e Nargil {Iranian coconut sweets with rosewater] and cotton candy. Of course, never miss a cup of hot tea next to these delicious sweets. 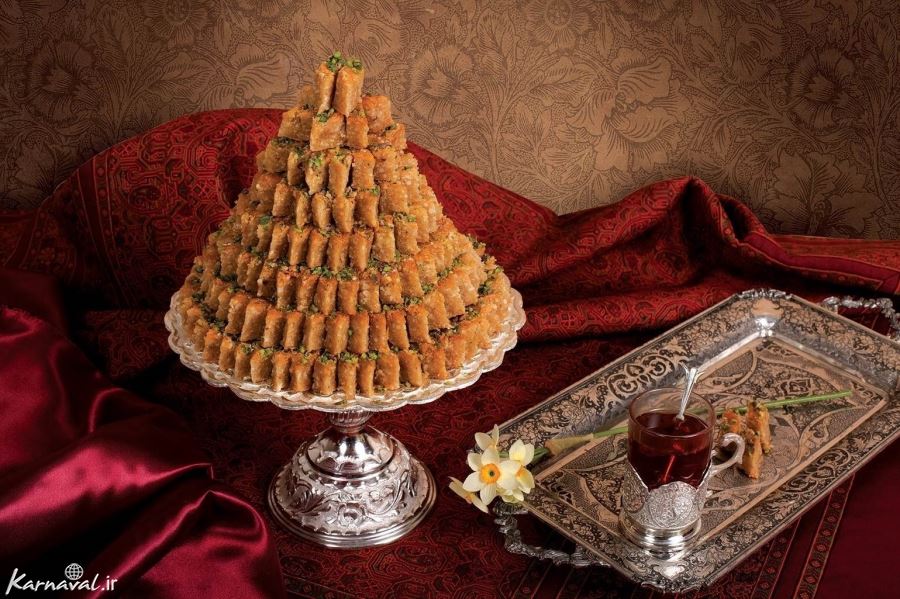 Koloocheh is a delicious cookie with different flavours such as cinnamon, walnut, cocoa, etc. Different regions of Iran have Koloochehs with different shapes. Koloocheh can be served in the afternoon along with your tea, or during your breakfast. 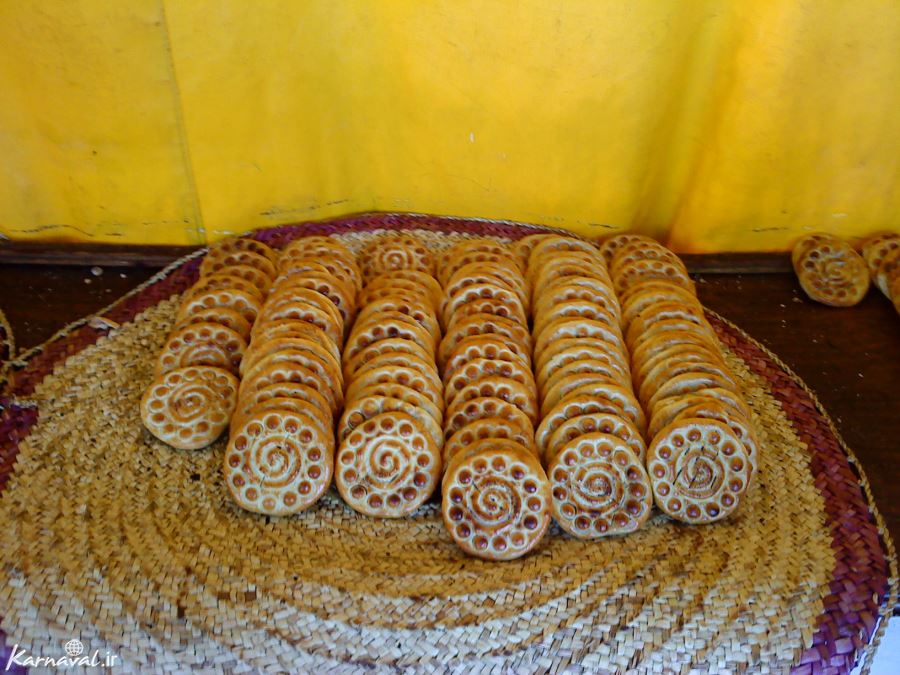 Sohan is the most famous traditional Iranian sweet. The ingredients of this brittle toffee are saffron, eggs, rosewater, sugar, butter, and cardamom. Its colour and the pistachio on top of it can make you crazy! Every time you have Sohan, you will need to brush your teeth.

Isfahan province in central Iran is the origin of this delicious candy. Sap of Angabin (a plant), rosewater, and egg whites are the main ingredients of Gaz while almonds and pistachios could be added to it as well.

Iran’s halva is different from its other forms in the Middle East. To prepare it, the Iranians slowly sauté wheat flour in oil or butter and then add sugar, rosewater and saffron to it. Almonds and pistachios are used to make it pleased to the eye. This dessert has a special place in traditional religious ceremonies. 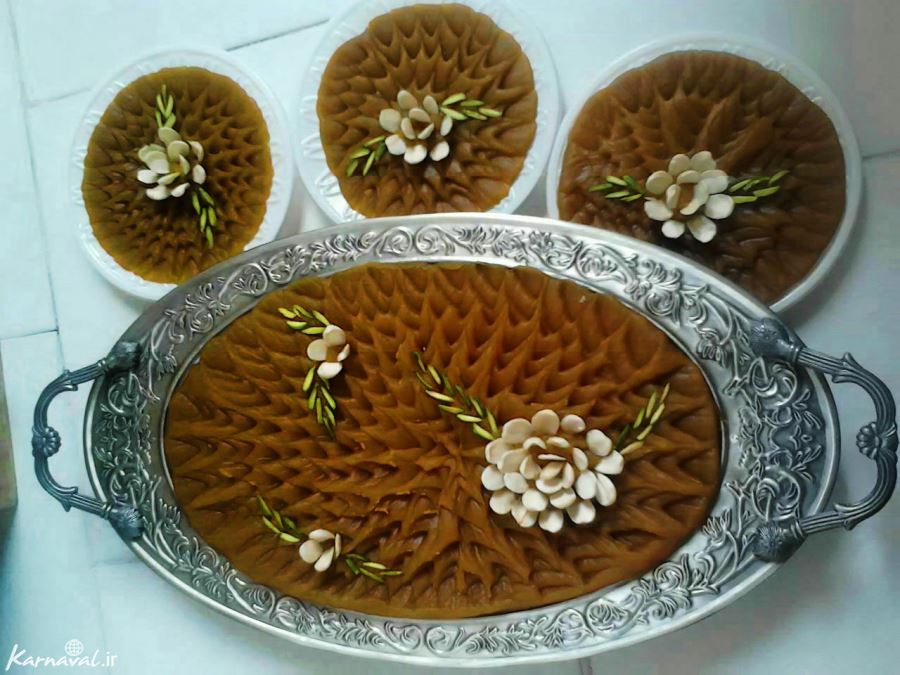