Gaz (Candy) is the name of a type of Persian nougat which originated from Isfahan in central Iran. The sticky white substance is formed of honeydew combined with other ingredients including pistachio or almond kernels, rosewater and egg white.

A major souvenir of Isfahan is gaz (a local sweet) which is only one of many things tourists come across in this beautiful Iranian city. People basically buy gaz  from the bazaar and shops.

But we recommend that you make it yourself at home. There are two types of gaza: Flour and morsel. The core of gaz can be either pistachio or almond. 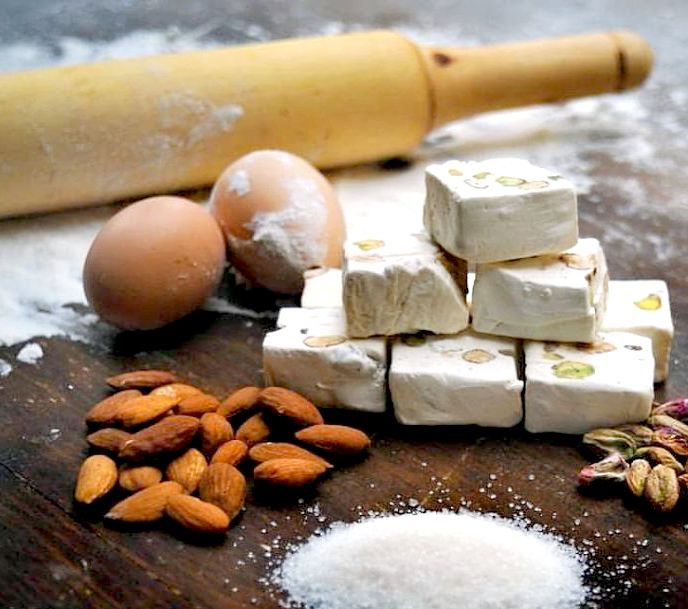 First, fry the desired nuts that you want to be inside the gaz, without oil, until they are roasted and are no longer raw.

In a copper casserole, mix the water and sugar and place the casserole on low heat until the sugar dissolves and the water is hot. But make sure the water does not boil (be sure to place the flame spreader on the fire).

After the sugar dissolves, add the glucose and mix well with a fork or a wooden spoon until the nectar is stretched and produces threads.

In the meantime, beat the egg whites with a high speed electric mixer until they swell and double in size. Then add rose water and stir a little.

When the nectar is ready, pour some of it into the beaten egg whites until they are warm, and after stirring a little, pour all the egg whites into the nectar pot and stir the ingredients in a rowing manner.

This stage takes one and a half to 2 hours to reach gaz.

Because the heat under the casserole is low and you used a flame spreader, you stop stirring from time to time and resume it so that you do not get tired. When the material has reached a stage where it hardens and does not spill out of the spoon, the gaz is ready and you can turn off the flame.

At this stage, add the roasted nuts to the gaz and stir it and nuts mixture. Wait for it to cool a bit and become tepid. Then shape it in any way you like or shape it in a mold as you desire.

Just be sure to sprinkle some flour inside the mold and give shape to the gaz therein. Keep  in the refrigerator for a day and then use it. 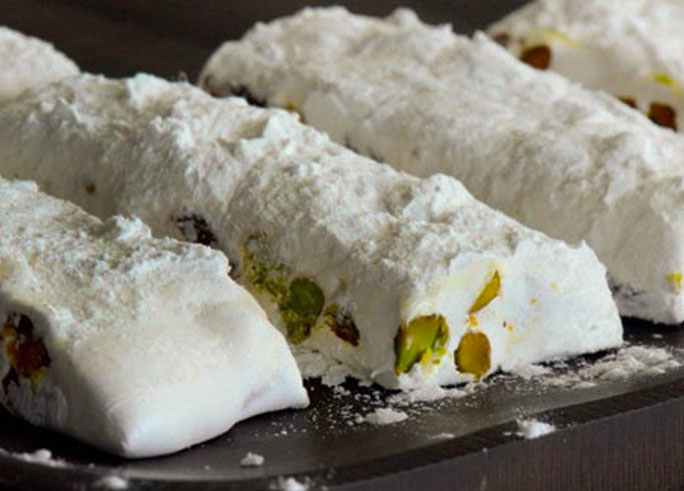 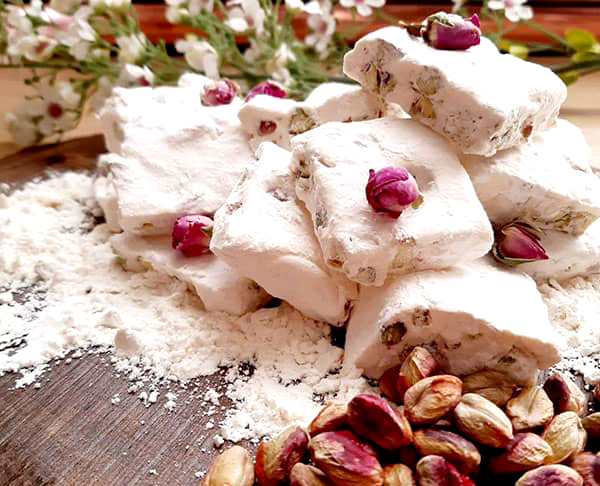 First, mix the sugar and rose water in a saucepan and put it on a mild fire until the sugar dissolves in the rose water and boils. While the rose nectar is boiling, stir the egg whites with a medium speed mixer until it completely takes shape.

When the rose nectar thickens, add the glucose and let it boil for about 8 to 10 minutes. Stir constantly until the nectar takes on a candy form and stretches between the two fingers. If the nectar is sticky enough and the two fingers are hard to separate, pour some of the ingredients into the beaten egg whites and mix well.

Then add all the egg whites to the syrup and stir with a high speed mixer on low heat until the gaz material is completely ready. At this stage, add the pistachios and stir a little.

Fill a bowl with flour and remove the gaz using two spoons and roll it in the flour bowl and shape it as you desire by hand or in the form of round gaz.

Put it in a closed container in the refrigerator for two hours so it congeals. To keep it fresh, sprinkle some flour into the gaz container.

How is gaz served?

gaz is served with tea or other drinks in ceremonies and on special occasions such as Nowruz or the Persian New Year. 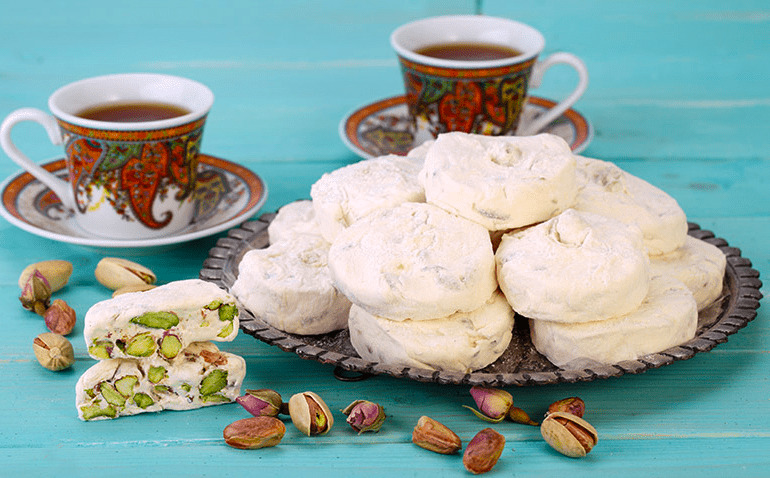