Newspapers on Tuesday covered the death of famous and acclaimed Iranian filmmaker Abbas Kiarostami in the French capital Paris.

They also highlighted a statement by President Hassan Rouhani, which addressed the Iranian nation on the issue of huge salaries paid to certain executives. Rouhani vowed to pursue the issue until the eradication of corruption, and stressed that he will not take anyone as an exception.

1- 3 Days of National Mourning in Iraq

2- Iran Is Second-Biggest Threat to US: Democrat Party

4- Personal Information of 25% of Iranians Were Leaked, But No One Was Dismissed or Gave an Apology 1- 20% of Iranian Industries Are Shut Down

2- Saipa to Implement New Form of Contracts with Foreign Companies 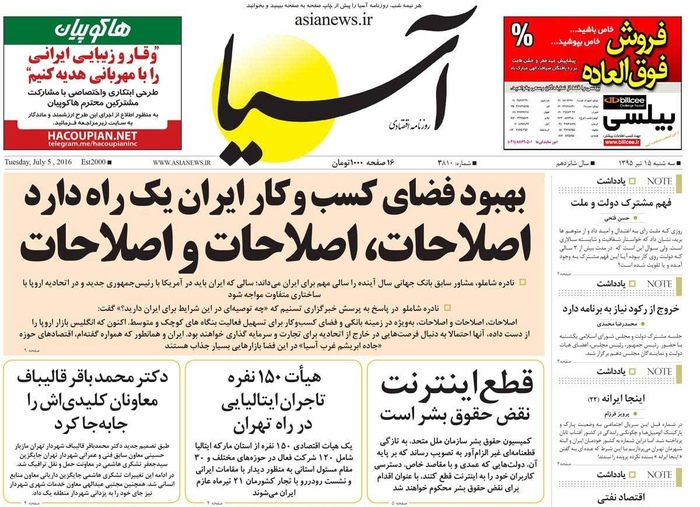 1- Salaries of All Bodies and Powers to Be Monitored: Intelligence Minister

2- Trilateral Committee to Be Held to Discuss Bioterrorism: Health Ministry

3- Official Licence for Screening of Foreign Films in Iranian Cinemas 2- Inappropriate Water Resources Management and Missing Culture of Water Use

3- Dear User! There Is No Security in Your Network! [on leakage of Irancell users’ personal information] 2- Ceremony Held in Australia in Honour of Master Shajarian 1- President’s Report to People: All Bodies Urged to Declare the Salaries They Pay to Their Executives on Their Official Websites 1- President Promises to Make a Major Change in Banking System

3- Takfiris [Extremists] Narrate the Story of Their Operation against Tehran 2- A Report on Emerging Phenomenon of “Hair Donation” 2- If There’s a Need for Apology in Some Cases, We Should Apologize: Rouhani, Referring to Huge Salaries 2- US to Return from Syria with Empty Hands: Newsweek 1- 8% of Iran’s Population Is Aged: We’re Getting Close to Population Aging Crisis

2- Record-Breaking Power Use during Summer 1- Washington Isn’t Reliable under Any Circumstances: US Hostilities Continue

3- Issue of Unconventional Salaries Not Related to Any Particular Branch of Iranian Establishment: Rouhani 1- Westerners’ Lives Seem to Be More Valuable than Those of Middle-Easters: Why Global Media Don’t Express Sympathy with Victims of Terrorism in Mideast

2- New Signs of Evolution in Regional Crises: From Putin’s Letter to Obama to Changes in Turkey 1- A Look at Triangle of Russia, Turkey and Israel: Is There a Plot Coming? 1- Towards Transparency: Rouhani Vows in His Statement

2- 17 Students Committed Suicide in Past Year

3- I Wanted to Boast My Talent by Leaking Personal Information of Irancell Users: Arrested Element