Lights Out at Milad Tower to Commemorate Earth Hour (+Video) 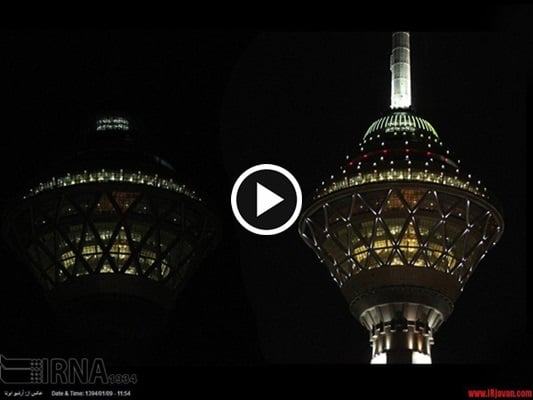 The iconic Milad Tower in Tehran went dark for an hour on Saturday night, as the Earth Hour campaign kicked off across the globe to raise public awareness about climate change and energy consumption.

Ali Darvishpour, the top executive of Milad Tower, the world’s sixth tallest telecoms giant, told the Persian-language ISNA on Saturday that the move is aimed at uniting people to protect the planet.

“The move aims to [encourage] collective action to save the planet. We, as guardians of earth, have a duty to respect the globe,” he said.

Earth Hour was also commemorated by urban symbols in other Iranian cities, including Rasht, Kerman, Ahvaz, Urmia and Isfahan.

Earth Hour is a worldwide movement aimed at drawing attentions to the global warming caused by burning of fossil fuels in vehicles, factories and power plants.

The movement was first organized by the World Wide Fund for Nature (WWF) conservation group in Sydney, Australia, in 2007.

Since then Earth Hour has grown to engage more than 7000 cities and towns across 187 countries.

Iran joined the global initiative in 2011.

The United Nations Headquarters and the Empire State Building in New York, Paris’ Eiffel Tower, Moscow’s Kremlin, Sydney’s Opera House and Hong Kong’s Victoria Harbor are among the iconic structures that plunged into darkness on Saturday.